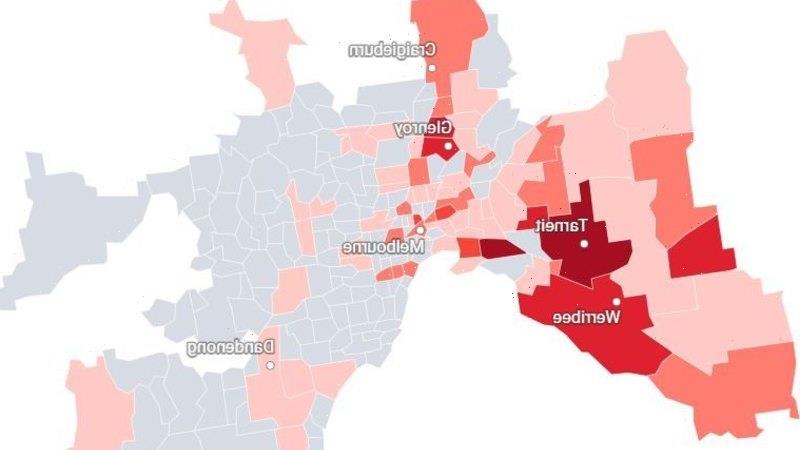 There are currently 76 populated postcodes in Victoria where at least one person has contracted COVID-19, Department of Health data shows.

Using the map below, you can see which postcodes in the Melbourne region currently have at least one active case:

If you hover your mouse cursor over a postcode or tap on the area of interest, the map will tell you how many active cases there are in the selected area. You can also use the controls on the right of the map to zoom in on your chosen postcode.

Of the 522 active cases statewide, the overwhelming majority are in the Greater Melbourne region.

Postcode 3029 (Hoppers Crossing, Tarneit and Truganina) currently has the most active cases with 91, followed by 3025 (Altona North) with 68.

In regional Victoria, there are 44 active cases in the Shepparton region, up from 37 on Monday.

There is also one active case in Bonnie Doon, about 170 kilometres north-east of Melbourne. This infection was added to the map on Tuesday and is the first time a COVID-19 case has been confirmed among the township’s residents since the start of the pandemic.

This map shows the number of active cases in each postcode in the Greater Shepparton region:

There are also five active cases statewide for which the postcode of residence of the infected person is not yet known and four active cases among returned travellers in hotel quarantine. These cases do not show up on the map.

These maps of active cases in the Melbourne and Shepparton area will be updated daily, and if a postcode is not appearing on either it means the area currently has zero known active cases.

You can see how active case numbers have tracked in your postcode over the past week using the interactive below. If you type your postcode into the search box, the graph will show the number of known active cases there as of each day since August 17:

Of the 50 new local COVID-19 cases reported on Tuesday, 12 were in postcodes that previously did not have any active cases.

The postcodes that now have active cases include: 3629 (Ardmona, Coomboona, Mooroopna, Mooroopna North, Undera), where three cases were added to the map on Tuesday; and 3028 (Keilor Downs, Keilor Lodge, Taylors Lakes and Watergardens), where two new cases were confirmed.

One new case was recorded in each of the following postcodes, which previously had zero active cases: 3006 (South Wharf and Southbank), 3019 (Braybrook and Robinson), 3065 (Fitzroy), 3074 (Thomastown), 3130 (Blackburn, Blackburn North, Blackburn South and Laburnum), 3150 (Brandon Park, Glen Waverley and Wheelers Hill) and 3720 (Bonnie Doon).

If you would like to view the data on active cases in table format, the data has been included in a searchable database below:

24/08/2021 World News Comments Off on Which Victorian postcodes have active COVID-19 cases?
Markets