For days, people have come down to the bank of the Murray River in Echuca’s port precinct to watch the river and photograph its progress.

Inexorably, it rises. By 4pm on Thursday, an engorged Murray had risen to 94.48 metres above sea level, more than 1½ metres higher than it was the same time a week ago. 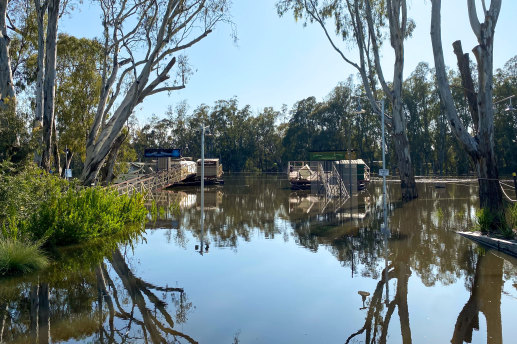 The Murray River creeps up in the Echuca port area.Credit:Bianca Hall

When we think of floods, we imagine rushing water that takes us by surprise. Lismore, Rochester. But this is something different. The Murray River is a ponderous, purposeful river. She means business.

There is an eerie and tense feeling in Echuca, where residents know the river is coming for this beautiful port town, and yet are powerless to stop it.

While there is a sense of unreality in the waiting, authorities have taken the opportunity to act.

Here, the slow-moving nature of the Murray – especially compared with the rushing Campaspe River, which flooded the other side of town nearly a week ago – has given flood responders a chance to throw everything at mitigating its effects.

Luke Waterson has been co-ordinating the local response.

He and his colleagues have tried something that has not been attempted here before: building a 1.5-metre high, and 2.5-kilometre long, mineral-earth rampart to protect the town against the coming tide.

“Thankfully, Echuca has been able to see this coming and plan for the mitigation of further destruction,” Waterson said.

Planning for this has been a Herculean task. Waterson, who usually works in Fire Rescue Victoria, has been seconded as incident controller.

“Nearly every emergency service or government agency is involved in some way, shape, or form in this event,” he said.

The Murray flood was initially expected to hit Echuca on Wednesday, so the multi-agency group decided they had to act fast.

It was unanimously decided they would construct an extensive earthen levee bank to try to hold back the floodwater. “I said to my daughter, when I took her around to have a look at it, ‘you’ll never see this again’,” Waterson said. “I hope I’m right.”

The levee has been controversial in parts. It will leave some 190 homes on the “wrong” side of the river when the Murray rises. But it will protect thousands of others and, as Campaspe Shire mayor Chrissy Weller has said, save Echuca’s CBD from going under.

In Yorta Yorta, the name Echuca translates as “meeting of the waters”.

It is here that the Campaspe, Goulburn and Murray river systems meet, and it is the relationship between these three rivers that lends so much danger to the looming flood.

The might of all those river systems combined now threatens Echuca and, on the other side of the river in NSW, Moama.

Waterson said the advice on when the peak will come is changing daily – sometimes hourly.

On Monday, a community meeting was told to brace for river levels of 95.9 metres above sea level on the Echuca side on Wednesday or Thursday.

That was later revised down to 95.6 metres on Friday afternoon or Saturday.

On Thursday, that was again revised down – with the Bureau of Meteorology predicting a peak of 94.8 metres on Sunday.

One thing no one here has any doubts about is the enormous effort that’s been deployed over the past week by so many people.

Waterson, an Echuca local, is momentarily lost for words when he tries to describe the scale of the effort.

“The community spirit in this town has been unbelievable,” he said.

“I’ve seen mates of mine work almost around the clock for the last seven days to try and achieve something that is just unbelievable.

“It’s heartwarming to see the level of support that we’re getting and the level of community resilience and community spirit. We’ll be right. We’ll come out of this, no worries at all.”

20/10/2022 World News Comments Off on ‘We’ll be right’: A waiting game in Echuca as Murray keeps on rising
Markets