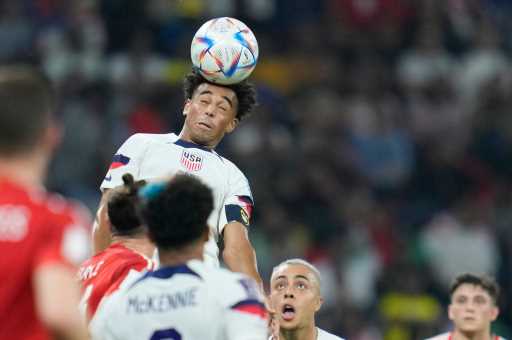 It had been 3,065 days since the United States Men’s National Team had played in a World Cup game.

After 90-plus minutes, the first feeling after the full-time whistle sounded: a stinger. World Cup tension is back. And for better or worse, it was sorely missed.

Leading 1-0 at halftime against Wales Monday at the Al Rayyan Stadium in Qatar, the U.S. conceded a late penalty kick as Welsh talisman Gareth Bale thumped home an emphatic penalty kick and the match finished level at 1-1.

For U.S. fans, it will feel like two points dropped, particularly after the team played well in the first 45 minutes. However, in the second half, Wales’ direct passing proved tough for the U.S. and it controlled the last half hour of the game. Here are three takeaways.

In the first half, the Americans dominated the center of the field and on the wings. With Wales hunkering down, the U.S. was able to build on its attack. Forward Josh Sargent hit the side netting in the ninth minute. The lone American goal scored by Tim Weah in the 35th, came as a result of Yunus Musah finding pockets of space as he started the attack. Christian Pulisic played an inch-perfect pass to Tim Weah, who cut inside from the right wing, took one touch and coolly buried it.

With Weston McKennie and Segiño Dest picking up early yellow cards, the U.S. was never able to maintain being the aggressor. McKennie, in particular, is the invaluable engine for the U.S. on set pieces and his physicality.

That space disappeared in the final 45 minutes as Wales, which was playing in its first World Cup game since 1958, pushed its midfield forward and won the physicality battle. Kieffer Moore, a second-half sub, changed the game as he was able to run at the Americans and helped his teammates remain dangerous on the ball.

With the tables turned, one mistake cost the U.S., as central defender Walker Zimmerman took down Bale with 10 minutes to go on a clear penalty decision. The young Americans looked emotionally and physically drained at full time.

While the midfield play wilted due to Wales’ pressure, the American attack was consistent all night. They played without fear. The U.S. started on the front foot and players like Weah and Sargent came out firing with aggressive runs off the ball. While Giovanni Reyna could have been a key substitute on the wing, Weah more than held his own. Plus, Christian Pulisic looked ready for the moment as he was a huge catalyst for the U.S. attack and came through with the assist.

While they looked dangerous, from here on it will be about being able to convert chances.

Starting goalkeeper Matt Turner made a few clutch saves, while the defense looked stout for most of the night. But will 2022 be the same? Up next, the U.S. faces England, which beat Iran 6-2 in its first game Monday. The Americans have never lost to the English in a World Cup, with a tie in 2010 and a famed win in 1950.

Kickoff on Black Friday at noon will be on FOX.

The standings will leave a lot to ponder at the end of the first matchday in Group B, and the pressure is on.