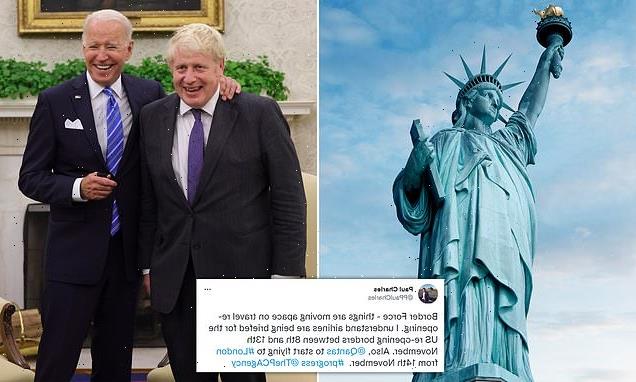 Double jabbed Britons are not expected to be allowed into the US until November 8, a travel expert revealed today.

Paul Charles of the PC Agency said airlines were being told to expect the American border to reopen any time from then to November 13.

The White House had officially announced ‘early November’ as the time when the US will lift its 18-month ban on foreign nationals – raising hopes it could happen in the first week.

Qantas has announced it will restart some international flights to destinations including London a month earlier than planned after the Australian government said fully vaccinated Australians could enter and leave the country freely from November.

Passengers will be required to quarantine at home for seven days upon arrival in Australia. The Australian government on Friday indicated that some of its eight states and territories would open earlier than others.

‘We welcome the federal government’s decision and the work by the New South Wales government to facilitate the home quarantine approach that makes this feasible,’ Qantas Chief Executive Alan Joyce said. ‘We look forward to other states and territories getting on board.’

Passengers with at least two shots of the vaccine, or one shot in the case of Johnson & Johnson, will need to have a Covid test within three days of departure and will not be required to quarantine upon arrival.

The new rules affect 33 countries whose nationals are currently banned from traveling to the states.

The news comes as the Biden administration looks to repair is relationships across Europe. It came out of the blue after the US-UK-Australia submarine trade deal that enraged France last week and prompted it to recall its ambassador to the US.

Asked if the move was politically motivated due to current tensions with France, Zients said it was ‘based on public health.’ He added it was also based on ‘individuals rather than on a country-based approach.’

The news coincides with the UN General Assembly in NYC – where both President Biden and British PM Boris Johnson will speak. Johnson was expected to press Biden to lift the restrictions on Tuesday, and praised the lift of restrictions in a tweet Tuesday.

‘I am delighted that from November, @POTUS is reinstating transatlantic travel so fully vaccinated UK nationals can visit the USA. It’s a fantastic boost for business and trade, and great that family and friends on both sides of the pond can be reunited once again.’

The US travel ban, which has been slammed as ‘absurd’ by critics, also deprived the beleaguered aviation sector of one of its most important and lucrative markets. 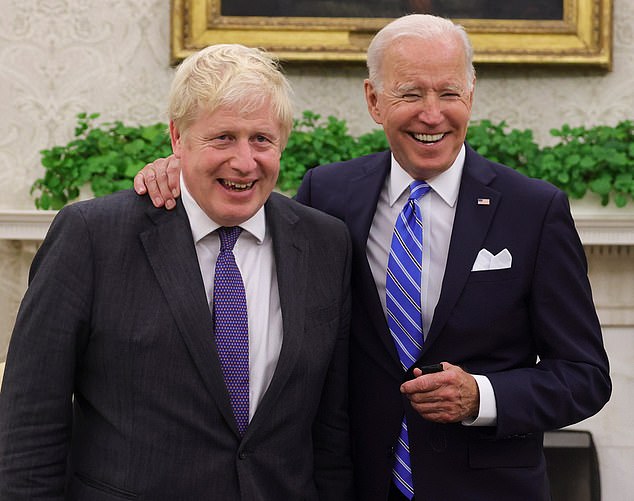 The White House had officially announced ‘early November’ as the time when the US will lift its 18-month ban on foreign nationals – raising hopes it could happen in the first week. Pictured is Joe Biden with Boris Johnson

At the time, Boris Johnson expressed his delight at the news, saying the easing of US restrictions had happened ‘faster than we expected’.

He said families will be able to be reunited ‘by Thanksgiving’ on November 25 which he described as a ‘great thing’.

‘I thank everybody in the US-UK joint working group who have been hard at it,’ he said.

‘And I thank the president for the progress that we’ve been able to make.

‘Yes we have done it faster than we expected but that’s thanks to the hard work of our teams.’

The move will mark the end of intense negotiation between London and Washington after the UK and EU lifted their bans on American visitors – but this was not reciprocated by DC.

Under current travel policy, only American citizens, their immediate families, green card holders and those with national interest exemptions are allowed to travel to the US, though other nations have higher vaccination rates and lower Covid-19 case counts. 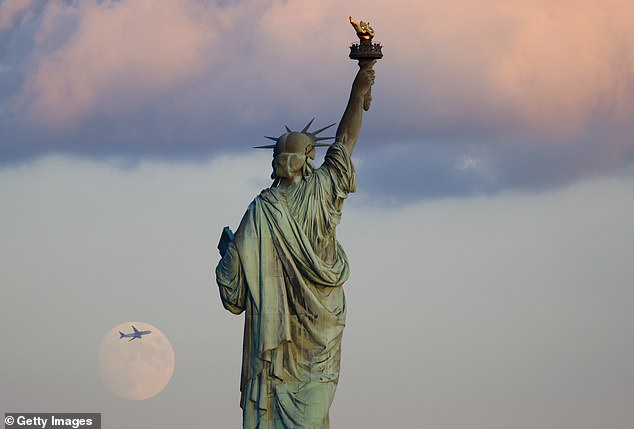 Passengers with at least two shots of the vaccine, or one shot in the case of Johnson & Johnson, will need to have a Covid test within three days of departure and will not be required to quarantine upon arrival.