Victoria could soon have its largest crossbench in decades as voters disenchanted with the major parties threaten to elect an unprecedented number of independents and Greens to the state’s lower house.

With polls pointing to either a reduced majority or minority Labor government, pollsters and commentators agree on one thing — the likelihood of more Greens and independents in the Legislative Assembly. 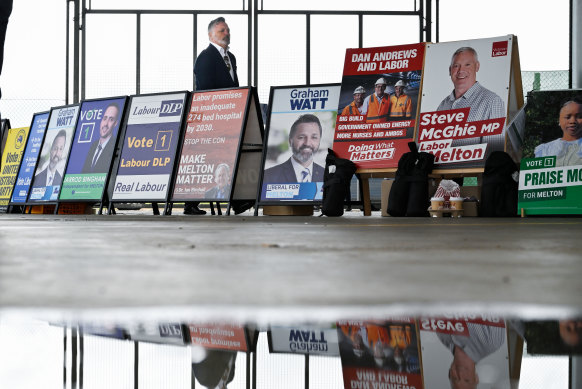 “Based on current polling and guesstimates we are looking at a crossbench of unprecedented scale in the modern era,” Monash University’s Professor Paul Strangio said on Friday.

“We are looking at a crossbench of perhaps as many as a dozen, comprising independents and possibly five or six Greens.”

The current crossbench includes three Greens (the seats of Melbourne, Brunswick and Prahran) and country independents Suzanna Sheed (Shepparton) and Ali Cupper (Mildura) as well as Russell Northe (Morwell) who is retiring.

Boosted by the Liberals’ decision to preference them ahead of Labor, the Greens are favoured by pollsters and pundits to take the once safe Labor seats of Richmond and Northcote while Albert Park, Footscray and Pascoe Vale are considered possible but less likely Green gains.

‘What we saw at the federal level people want to continue at the state level.’

Both major parties are being challenged in heartland seats with Labor struggling to hold outer western suburban Melton in particular from independent Dr Ian Birchall, while clouds hang over Point Cook and treasurer Tim Pallas’ seat of Werribee.

History suggests a two-term Labor government should be an easy beat for the Coalition. But the Liberals themselves face the prospect of losing previously safe seats as the environment, integrity and gender-focused “teal” movement continues its march through Melbourne’s inner east and south-east.

Torney said it became clear while door-knocking more than 10,000 homes that voters were fed up with both major parties.

“What we saw at the federal level people want to continue at the state level — good quality candidates running and representing their community and taking values and issues to the parliament, unfiltered by party politics or vested interests.”

But Liberal candidate Jess Wilson said her team had had a positive reception as they door-knocked 16,000 homes.

She said anti-Dan Andrews sentiment had intensified in recent days. “There’s a real mood to change the government.”

La Trobe University adjunct research fellow in politics Ian Tulloch said he expected the Victorian parliament would be more Green and independent after the election, with the Greens a strong chance of winning Northcote and Richmond and Torney taking Kew.

Most commentators have been less confident calling the outcome in the other seats targeted by the teals — Hawthorn (held by Labor by just 0.6 percent) Caulfield ( Liberal by 0.04 per cent) and Mornington (Liberal 5 per cent).

Teal candidate and doctor Kate Lardner said a minority government that relied on independents would be the best outcome for Mornington, and she could work with either side of politics to get a better deal for her constituents.

“We miss out on our proportional funding compared to Geelong and Frankston,” she said. “Independents can work both sides of politics to get that.”

Other Liberal-held Melbourne seats looking vulnerable include Brighton where well-known former Liberal Felicity Frederico is hoping to ride the wave of disaffection seen in Zoe Daniel’s defeat of Liberal Tim Wilson at the May federal election.

Independents are also pushing into new territory in rural Victoria with pundits like Bracks declaring the Liberals were “in big trouble” in Benambra (Liberal 2.6 per cent) in north-east Victoria where independent Jacqui Hawkins is challenging incumbent Bill Tilley.

Hawkins said the success of independents — Cathy McGowan and Helen Haines — in the federal seat of Indi, which takes in Benambra, showed her community was ready for change.

“We’ve been able to reap the benefit of that for the past four federal terms,” she said. “People want that at a state level.”

In the traditional Liberal stronghold of South West Coast, which runs along the Great Ocean Road and centres on Warrnambool, independent journalist Carol Altmann is considered an outside chance against incumbent Roma Britnell who holds the electorate by 2.3 per cent. 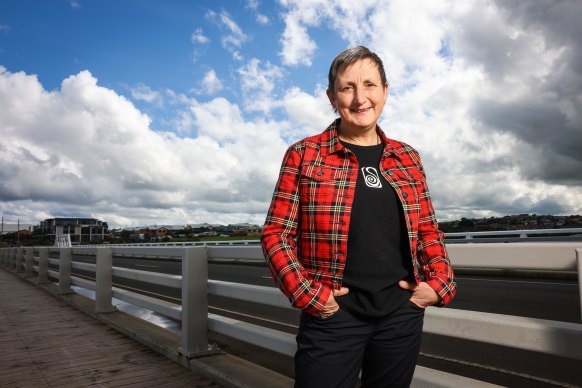 Altmann said she could feel a mood for change while on the street campaigning.

“Just on pre-poll, the feedback is amazing,” she said. “I’m hoping that translates to votes.“

But the lower house’s two existing independents are also having to defend their own patches against well organised Naionals and Liberals.

Suzanna Sheed has held the former National stronghold off Shepparton for two terms. National insiders say they are quietly confident of taking back the seat. 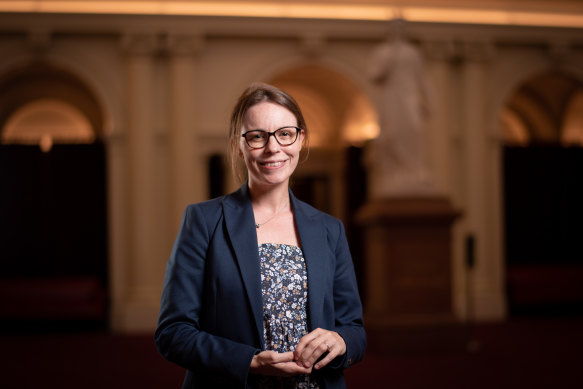 Mildura MP Ali Cupper’s cut feeling is that she can ‘jag’ a win.Credit:Eddie Jim

“My point of difference is having six years in local government and having been here since I was 4 years old,” she said. “The community has seen my hard work and dedication.”

In Mildura popular independent Ali Cupper is quietly confident: “My gut feeling is I can jag it because my results have been so compelling”.

“I’ve had one hand tied behind my back because the government has such a crushing majority.

“But still we’ve had an exponential increase in spending on housing, health, education, sport, tourism and roads.

“And we’ve got Mildura Hospital back into public management.”

Strangio pointed out that there had been a period after World War II when the then Country Party — the antecedent to the National Party — was not in coalition with the Liberals and arguably contributed to a substantial crossbench.

“The Country Party aside, what we are likely to see in the Legislative Assembly after this weekend is a crossbench of unprecedented size in living memory.”