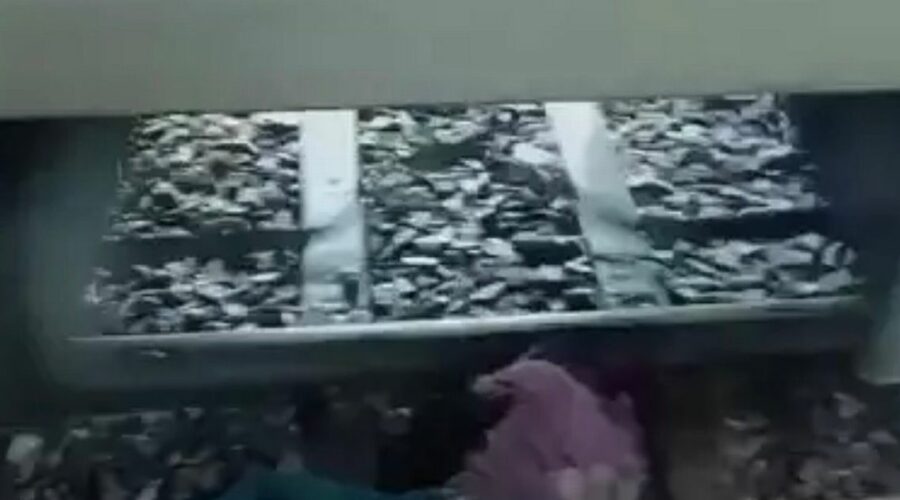 A young railway passenger who lost his fingers in a freak train accident was lucky to escape with his life.

Raju Kashyap fell through a gap between the train and platform edge in the shocking incident at Suriawan railway station in Uttar Pradesh, India on Wednesday (September 14).

Shocking viral footage shared online showed fellow commuters crying out in panic as a Kashi express train bound for Mumbai set off with him underneath.

Raju, who squeezed himself into a narrow gap at the side of the track to avoid being run over, eventually emerged at the end of the clip and stood up while clutching his fingers after the train ran over his hands.

He was then taken to a local health clinic before being referred to Varansi Hospital, reports the Times of India.

It was later confirmed he lost fingers from his left hand, and also had to receive stitches after suffering a head injury.

Describing the incident, Janghai junction GRP chief Inamullah Khan told local media that Raju had slipped at the platform while attempting to board a moving train, and two of his fingers were crushed under its wheels.

A similar incident in the same province this month captured on CCTV saw a woman saved from almost certain death as she was helped up off the tracks at Firozabad Railway Station just seconds before a fast-moving train went past.

After being assisted by a train guard, the seemingly unfazed woman was nearly hit for a second time when she leant over onto the track to retrieve her water bottle.

In southern India, a teenager was last week struck by a train after he was filmed walking perilously close to a running train as part of a reported Instagram stunt.

Incredibly, although sent flying and left with injuries to his face and leg, the boy survived the accident.

The young man, identified as Ch Akshay Raj, 17, was being filmed by another person who can be heard talking to him in the background.