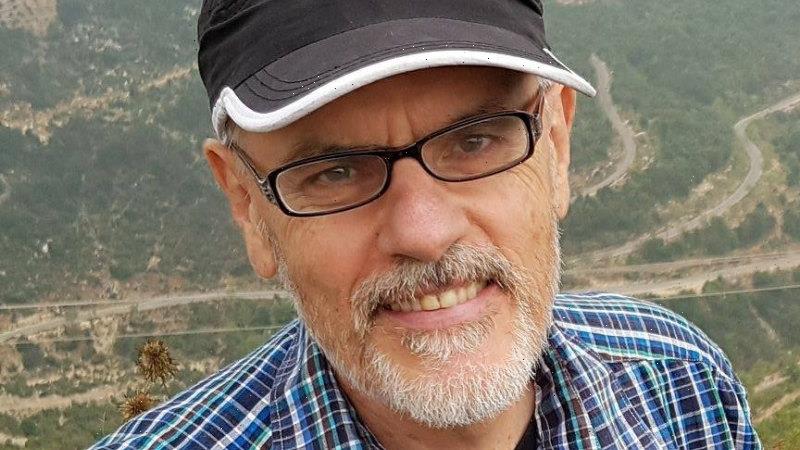 The University of Sydney broke the law by sacking senior lecturer Tim Anderson for his comments about Israel and other matters – including superimposing the Nazi swastika on the Israeli flag in a lecture slide – a court has ruled.

Federal Court Justice Thomas Thawley found Anderson was exercising his intellectual freedom and accepted Anderson’s argument that he created the swastika graphic for academic purposes, to encourage critical analysis and point out comparisons between “fascist systems”. 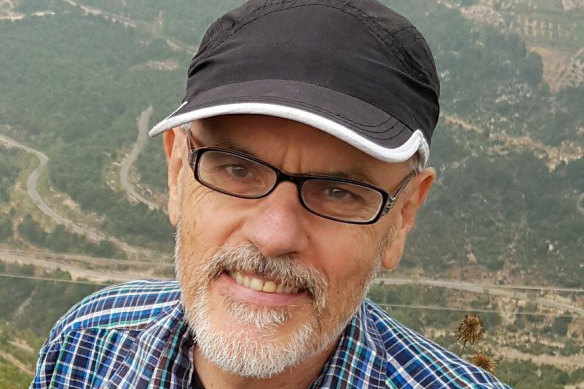 Former Sydney University academic Tim Anderson has won a victory in his battle against the University of Sydney.Credit:Facebook

Anderson was sacked from his post at Sydney’s oldest university in February 2019. The swastika incident followed years of controversial statements and activities, including several trips to North Korea and Syria and expressions of solidarity with their dictatorial regimes.

After previous warnings, in October 2018 the university began the process of firing Anderson when he published lecture slides about civilian deaths in Gaza resulting from Israeli military operations. Anderson included an image of the Israeli flag superimposed with the Nazi swastika.

At the time, the university told Anderson the altered image served “no legitimate academic or intellectual purpose” and he should have been aware that it would cause offence.

In an affidavit, Anderson told the court, “While some may feel offended by Nazi-Zionist analogies, I say the inclusion of the analogy in that graphic was appropriate. The purpose of the slide was to encourage critical analysis … No student raised any issue with the slide during the seminar.” 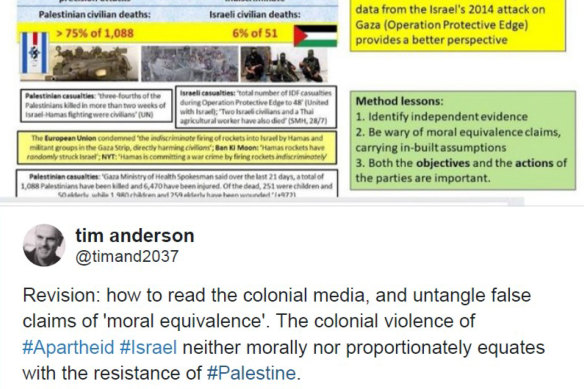 Tim Anderson used the graphic – in the top-left corner above – in a lecture slide which he later posted on social media.Credit:Internet

Following an appeal brought by Anderson and the National Tertiary Education Union, Thawley accepted Anderson created the graphic for academic purposes. He said he did not infer – as was contemplated in a previous judgment – that the imposition of the swastika was “a form of racial vilification intended to incite hatred of Jewish people”.

Furthermore, Thawley said the university had not established that Anderson breached the clause in his workplace agreement requiring him to exercise intellectual freedom “with the highest ethical, professional and legal standards”.

“Whilst I consider that the [slide] would be offensive to many people, in the context in which the Israeli flag superimposed with the swastika was used, I do not consider that its use involved ‘harassment, vilification or intimidation’,” Thawley wrote in a judgment published on Thursday.

“It is necessary to consider the matter in the context which existed at the time of publication and not by reference to later events, including the escalation in the dispute between Dr Anderson and the university.”

The judge also found several other comments by Anderson – including disparaging remarks about journalists who wrote about him – all constituted the exercise of intellectual freedom.

Therefore, Anderson could not have engaged in serious misconduct and the university unlawfully dismissed him, Thawley ruled. He also found Professor Stephen Garton – acting vice chancellor at the time and now principal adviser to vice chancellor Mark Scott – liable for the unlawful dismissal.

In a statement, Sydney University said it was disappointed with the court decision, “which focused on just one aspect of the proceedings initially brought against the university”.

“We note that we previously succeeded in having all other aspects of the proceedings dismissed. We will now take time to review the decision and consider our response and next steps. We won’t make further comment on this matter at the current time,” the university said.

The NTEU said the judgment was a win for academic freedom and showed the workplace agreement upheld that principle.

“This case was never about what Dr Anderson said. We don’t always agree with our members, but we will defend their right to academic freedom – a cornerstone of universities,” the union said.

Anderson and the union were represented by Bret Walker, SC, while Kate Eastman, SC, appeared for the university and Garton. Anderson was contacted for comment.