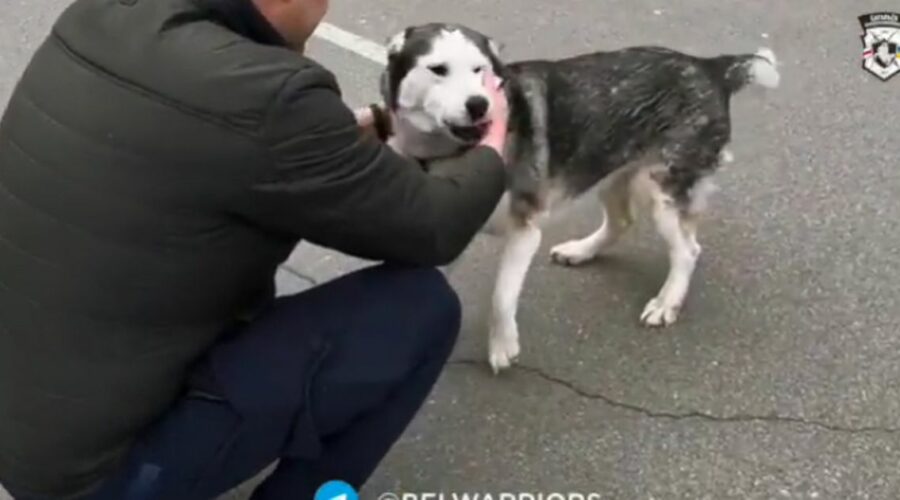 A husky pup has been reunited with its owner after being rescued from the war-torn area of Bucha in Ukraine.

The touching video shows the reuniting of the dog and the male owner after it was rescued by a Belarusian battalion fighting against the Russian invasion.

Bucha has been in the headlines over the last few days after shocking images of dead bodies in the streets of the city have led to worldwide condemnation of Russia.

However, Russian President Vladimir Putin and his top team have denied the allegations of war crimes, claiming the evidence on the ground was “fake”.

But in a touching moment from a horrible situation, the video of the man and dog has now gone viral.

According to a loose translation of a Telegram post about the video: “The owner had two dogs, a husky and a Shepherd and left them in the care of their neighbours as they were not going to flee from Bucha.

“They lost a connection with them and their neighbour had to eventually evacuate, let them out and left a bag of food open for them.”

However, the husky was rescued and reunited, but the other dog was not seen by the battalion.

The dog can be seen jumping and running around, while barking and yelping out of happiness.

While it has not been confirmed, it is possible that the Belarusian battalion was part of the new “Freedom of Russia Legion” which has seen several Russian forces turn against their home country.

The Ukrainian Defence Ministry said on Telegram that the “first volunteers” of the legion had already started training, and showed off a video clip of this new unit being trained in the use of the Swedish-made NLAW anti-tank weapon.

The video’s narrator said the Russian soldiers had ”expressed a common desire on behalf of all the volunteers to conduct the first battle against the guard dogs of the Putin regime — the Kadyrovites”.

The “Kadyrovites” are Chechen fighters loyal to Chechnya’s President Ramzan Kadyrov, who has recently joined Russia's forces in Ukraine., accompanied by his teenage son.

Russian-language Ukrainian news site Bagnet reported that joining the legion is voluntary and Russian prisoners of war have to apply in writing, and pass strict security vetting before they can join up.

It has been reported that "several hundred" officers and men from the Russian army have already defected to Ukraine as the invasion force's morale crumbles, according to the Defence Ministry statement.