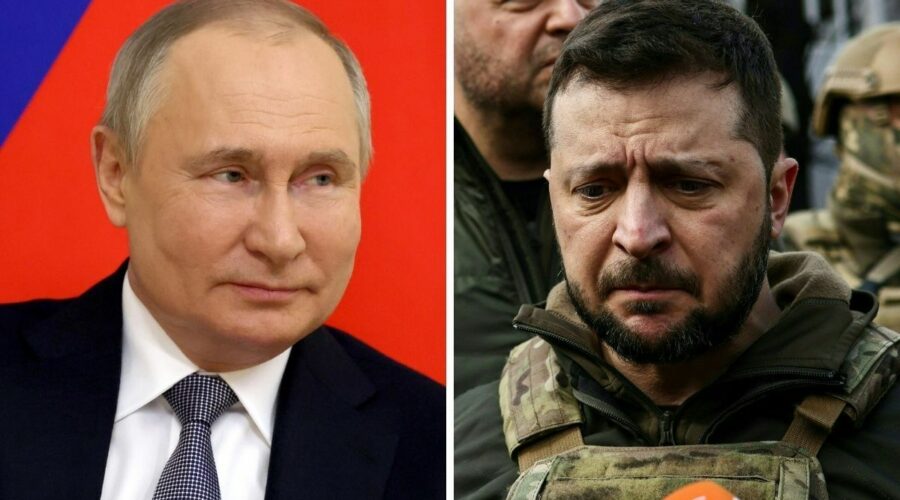 The Russian President is seemingly on the brink of his first major victory in Ukraine, with the crucial port city of Mariupol on its last legs. Putin told his forces in Mariupol to blockade Ukrainian troops sheltering in the Azovstal steelworks, the last remaining Ukrainian stronghold in the city. Russia has relentlessly bombed the southeasern port city for almost two months, with 90 percent of the buildings destroyed.

British intelligence suggests Russian forces are keen to demonstrate some form of major success in Ukraine by Victory Day May 9, the anniversary of allied victory over Nazi Germany in World War 2.

Putin’s victory in Mariupol would secure an uninterrupted land corridor stretching from Crimea in the south through to the Donbas in the east of Ukraine.

Yet Express.co.uk was told there is unlikely to be any overall winner in Ukraine, instead it will likely end in a “horrible draw”.

Jonathan Jackson, a senior teaching fellow in policing and security at Birmingham City University, told Express.co.uk it may be “too little, too late” for Putin and his troops.

He said: “Ukraine could certainly be able to hold and contain Russian forces to the east and south of the country and has well defended positions on both battlegrounds.

“The Russian military command and control is certainly improving, but it may be a case of too little, too late to decide the outcome in their favour.

“This conflict may require western audiences to reimagine what ‘winning’ may look like, and rather than a clear winner, it is likely to instead become a horrible draw, with legacies and hatreds spanning many decades into the future.”

He added: “The Ukrainians may not have the resources needed to launch effective counterattacks and push the Russian forces out without NATO boots on the ground, which President Biden has already ruled off the table.

“An uncertain future awaits but it will be decided around the diplomatic tables as much as on the ground.”

Putin’s war has caused the worst humanitarian crisis in Europe since World War 2.

Tens of thousands of lives have been lost, and millions of livelihoods have been destroyed through displacement, lost homes and lost incomes.

More than five million refugees have fled Ukraine since February 24, according to latest stats from the United Nations.

DON’T MISS:
Putin on brink of ‘long-awaited victory that he desires’ [EXCLUSIVE]
How to protect yourself after the deployment of biological weapons [NEW]
Putin launches chilling new missile ‘Satan 2’ in threat to West [LATEST]

As the war rages on into a grinding war of attrition, the world can expect horrific consequences in the weeks, months and years to come.

A long war might be Putin’s only option, Mr Jackson suggested.

He said: “Russian military doctrine has always relied on using quantity rather than quality and focuses on overwhelming enemies using this tired and tested method.

“Russia does not have a good track record when it comes to managing insurgencies successfully, and the longer the war goes on, the more doubt may emerge in Putin and his leadership.

“In the world of dark charisma, the infallible autocratic leader would find it difficult to explain away a defeat of this magnitude.”

However, Mr Jackson warned a war of attrition would only further damage the already low morale of Russian troops.

He explained: “Insurgences always favour the defender rather than the attacker, and with Russian morale already dangerously low, the longer the conflict drags on, the worse it will get for maintaining the military initiative.

“NATO also shows no intention of reducing supplies to Zelensky’s government, and this has already proven to be significant when understanding why the country’s resistance has been so strong.”

As the war approaches its third month, the fallout is becoming increasingly clear.

Russia is a major supplier of a number of natural resources, as is Ukraine. Reduced supplies of these has seen their prices increase dramatically.

The global food supply chain is feeling the effects of war, with prices rising, which in turn is expected to cause an increase in social unrest in poorer countries.

Ultimately, the depth of the consequences depends on how long the war lasts, but there are no signs Russia is ready to relent any time soon.

Despite the raft of sanctions imposed upon Russia, Putin appears to be undeterred from his objectives in Ukraine.