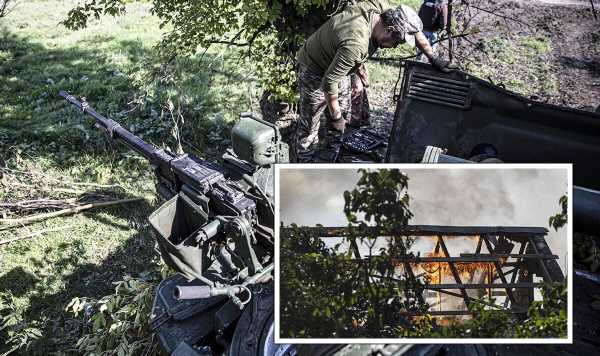 Ukrainian forces could push Vladimir Putin’s soldiers out of the occupied southern city of Kherson within days or weeks, Express.co.uk has been told, as the Russian leader hurriedly institutes martial law across the four annexed regions.

Speaking on Wednesday afternoon to Russia’s security council, Putin announced that the Kherson, Zaporizhzhia, Donetsk and Luhansk regions of eastern and southern Ukraine would be subject to new restrictions, with Russian figures in the areas gaining new emergency powers.

Kherson holds a certain symbolic value for both Ukraine and Russia, as it was the first major city to fall as Moscow’s February invasion first got underway.

Several settlements in the southern Ukrainian region have been heralded as “liberated” by Kyiv, and estimates say Russia has lost around 30km of ground in recent weeks.

But late on Tuesday night, Russian officials sounded the alarm for the Black Sea city’s residents to evacuate ahead of a suspected Ukrainian attack.

Kirill Stremousov, the Russian-backed deputy administrator for the region, told inhabitants that Kyiv’s forces “will shortly begin an offensive against the city of Kherson”.

Posting on Telegram, he wrote: “I ask you to take my words seriously and take them to mean: the fastest possible evacuation.”

He continued: “In the very near future, the battle for Kherson will begin.”

Stremousov urged civilians still in the port city “to leave the area of ​​the forthcoming fierce hostilities, if possible, so as not to expose themselves to unnecessary risk”.

On Wednesday morning, he reiterated the plea for civilians to evacuate, saying: “Move as fast as possible, please, to the left bank.”

Retired British Army colonel Hamish de Bretton-Gordon OBE told Express.co.uk on Wednesday that Russia’s openness in admitting the Ukrainian advance threatens the city “shows really how much on the front foot Ukraine is now and how much on the backfoot Russia is”.

He suggested that a sweeping Ukrainian victory could play out “fairly quickly” in the city, despite Ukrainian forces being likely to pay considerable attention to the possibility of civilian collateral damage.

The Ukrainian armed forces “appear to have all the troops and all the various elements that they need in place” for such an assault, he added.

He commented: “If the Russians are true to form, they’re not going to put up a fight, they’re going to run.”

Retd. Col. de Bretton-Gordon continued that although a decisive victory will not be declared “today or tomorrow”, it is certainly on the cards in the coming days and weeks.

Sergei Surovikin, the notorious general and newly-appointed head of Russia’s armed forces in Ukraine, said citizens from Kherson city were being “resettled” in what he conceded was a “tense” situation.

Vladimir Saldo, the Kherson region’s Russian-appointed governor, echoed that residents of the west bank of the Dnipro were most at risk.

It is thought around 10,000 people will be evacuated daily for six consecutive days.

The Kherson oblast, along with the three other regions annexed by Russia since February, were supposedly inducted into Russian territory after Vladimir Putin signed a decree, following the ratification by the two Russian houses of parliament, and a set of sham referendums.

The votes have not been recognised as legitimate or binding by the international community.