The latest hot weather maps from Netweather show temperatures soaring in the south east of England as the week progresses. On Tuesday, areas including Peterborough and Cambridge will be hit with 25C. Northern areas such as Sheffield and Leeds will also bask in highs of 23C.

Paul Michaelwaite at Netweather predicted temperatures to soar on Tuesday.

He said: “Some heavier bursts will remain in the west as it moves through England and Wales during Monday, but those further east are likely to stay mostly, if not entirely dry.

“That should have cleared through into Tuesday to leave England and Wales with some warm sunshine and temperatures head up into the high teens or twenties.

“Another front will move into Scotland and perhaps also Northern Ireland though, bringing outbreaks of rain, which are liable to become heavier as the day wears on.

“That will then slide southeast into midweek, but as it runs into the high pressure further south, it’ll fade quickly to become little more than a band of cloud by the time it reaches southern England.” 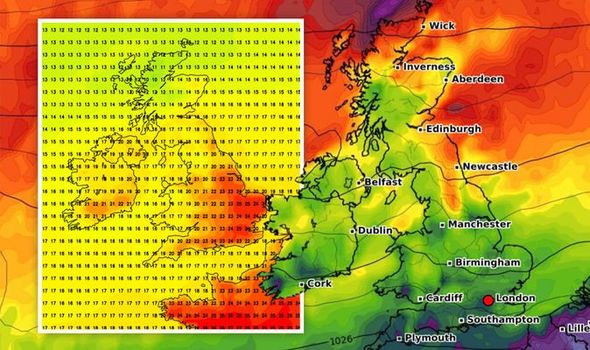 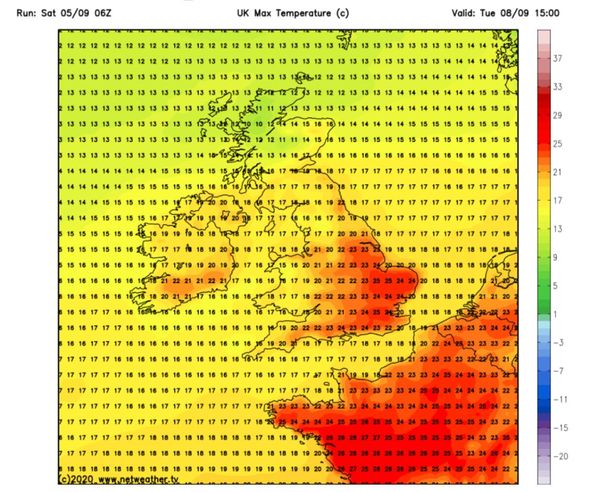 But Mr Michaelwaite added that the hot weather will pick up after a weekend of scattered showers.

He said: “This weekend has started in that style as well, with sunny spells and a scattering of showers.

“These are going to be most frequent in the north and west, with some southern and southeastern parts likely to miss them altogether.

“It’ll be breezy just about everywhere, and those winds are blowing in from a relatively cool west or northwesterly direction which will keep a lid on the temperatures. Southern regions are likely to reach 18-19c, but 14-17c will be about the limit elsewhere. 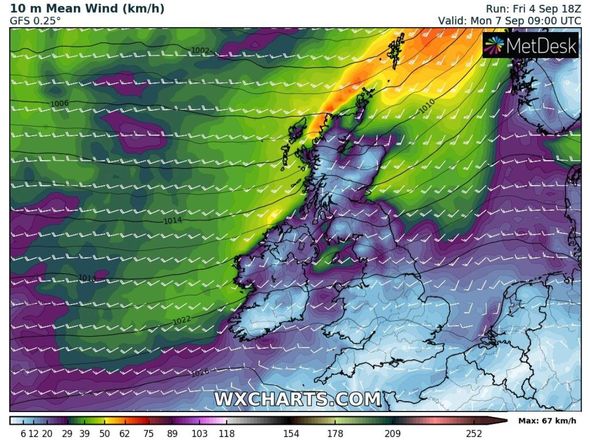 “Sunday will buck the trend as any showers in the north will tend to die out early on, leaving Scotland and the far north of England will a mainly dry day once they do.

“Elsewhere, there’ll be some sharp downpours about – all moving northwest to southeast before easing during the evening.”

Wind maps from WxCharts show the hot air will be brought in from the Atlantic, as swathes of high pressure will sweep in from a westerly direction.

Weather Outlook’s latest forecast stated: “Saturday starts with showers in the north. Southern and central regions are dry. Through the day the northern half of the UK has showers and a few may push into central regions. There will be sunny spells too and in the south it should remain dry. 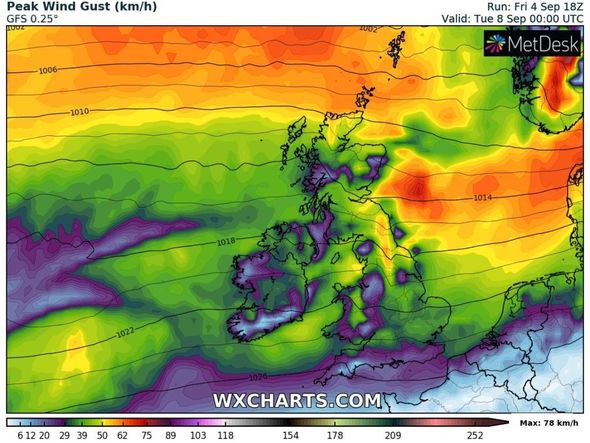 “Tonight showers become more scattered in Scotland but there will be some heavy ones in northern and western England as well as Wales. Chilly with a touch of ground frost possible in the Scottish glens.”

It said: “Today is breezy, especially in the north, with a mixture of sunny spells and showers, most frequent in the north-west, whilst some southern areas remain dry. Temperatures near normal. 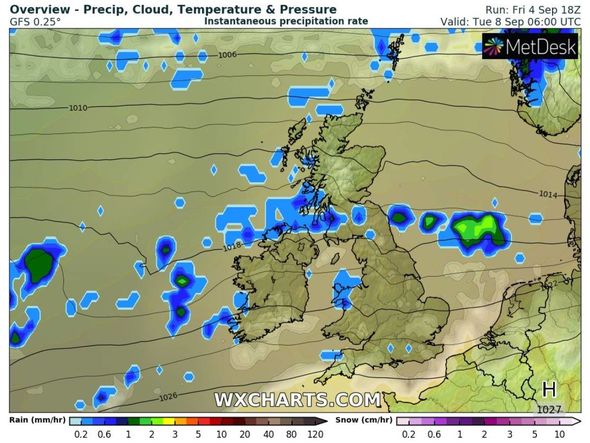 “Tonight, showers becoming more widespread across western areas, whilst it is mostly dry in the south and east of the UK.

“On Sunday, sunny spells and scattered showers, some heavy across northern and western England and Wales in the morning. Fewer showers in the north.

“Dry start Monday, before cloud and some rain in the northwest pushes erratically southeast across all areas through Tuesday and into Wednesday.

“Rather warm ahead of this, particularly Tuesday.”