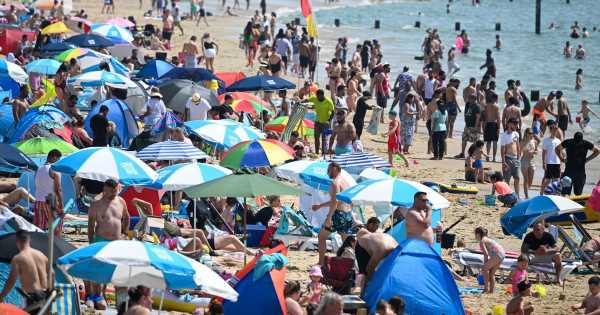 It could get that hot in the UK later this month, that there is a danger some roads could melt, experts have claimed.

With a heatwave on the horizon, that could see temperatures reach 40C and above, there could be the bizarre sight of the roads being gritted, in order to help them stand the heat.

RAC spokesman Rod Dennis said: “As the weather warms up, so too will the roads and you can pretty much guarantee that the road temperature will be significantly hotter than the air temperature.

READ NEXT: Larry the No 10 cat seen refusing to go inside while Boris Johnson refuses to resign

“The heat can lead to some softening of road surfaces – blacker patches of tarmac is the tell-take sign.

“If temperatures really shoot up, it might also be the case that gritting trucks will need to be brought out as salt can help improve vehicle grip on melting roads.”

It should turn warmer today (July 7), with the temperature hitting the mid-20Cs and even touching on 30C by the weekend, with the current drought continuing as not much rain is forecast.

Jim Dale, meteorologist for British Weather Services, said: “I see a period of between 10 days to two weeks where in parts of the country there will be no rainfall whatsoever.”

A 10-day scorcher is then set to be triggered at the weekend, with forecasters warning of sustained, extreme heat across Britain, with records set to tumble.

Exacta Weather meteorologist James Madden thinks sights should be set a bit lower than 40C, as he revealed: “We are looking at a sustained period of very hot weather from the weekend until the middle of the month.

“This could push temperatures into the 30Cs, with highs of 35C possible in some isolated spots.”

Weathertrending’s John Hammond also believes there won’t be any new temperature records set, as he added: “One or two computer models are indicating temperatures as high as 40C in the next week or two. That would be unprecedented, but highly unlikely.”

Bookmakers have cut the odds on a raft of hot weather odds with Coral offering 4-5 on the 38.7C record being broken.