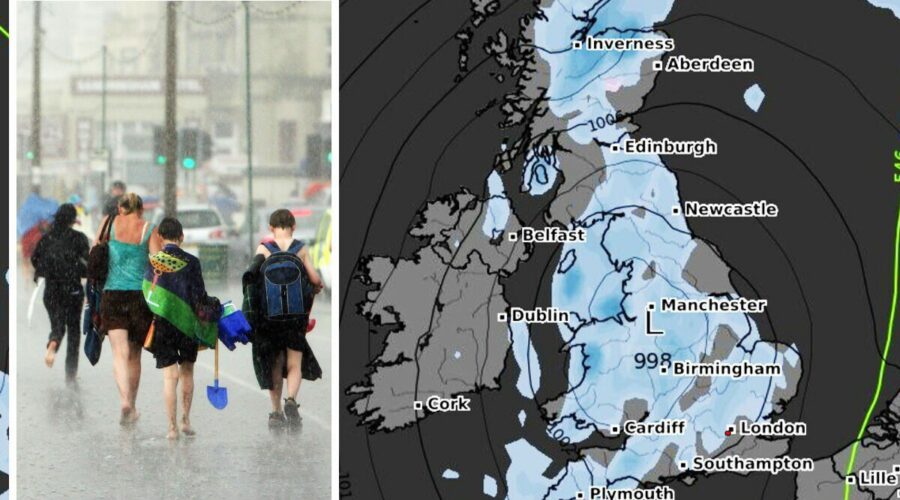 Netweather forecaster Paul Michaelthwaite warned that there is a risk of frost overnight this weekend. The cold spells will also bring an “increased threat” of rain over the bank holiday weekend, he said, primarily in the northern part of Scotland. Weather forecaster Jim Dale told Express.co.uk that the risk of wet weather will increase throughout the first two weeks of May, caused by the Atlantic and frontal systems.

Both weather forecasters warned gardeners of the impending frost, with Mr Dale explaining that the cold weather is a “threat” to small and budding plants.

Temperatures are set to reach lows of -1C overnight on Thursday, leading into the May bank holiday weekend.

Weather forecaster WXCharts predicted increasing amounts of rain throughout the first two weeks of the month, with up to 64mm falling in Scotland by May 13.

A maximum of 43mm is due to fall in the north of England and up to 30mm will fall in the south.

Netweather forecaster Paul Michaelthwaite said: “Today is actually the final day where high pressure will be to the north of the British Isles, as it’s going to be sinking south into tomorrow, settling itself over the top of the country for the remainder of the week.

“The risk of less settled weather playing a part over the weekend is because of the possibility that it’ll sink further south still, allowing Atlantic fronts to have a crack at moving in over the top of it.

“Overnight, where skies clear, there will be the risk of some frosts, and that’ll be ongoing into the weekend as well – so gardeners beware.

“Looking toward the long weekend, it’ll be the northern half of Scotland which’ll be the first area to see the increased threat of some rain off of the Atlantic.

“With that potentially then spreading further south as the weekend progresses.

“Southern and central England look well placed to avoid that though, probably throughout and there is the probability that the risk will recede elsewhere as we get closer to the time.”

Meanwhile, senior meteorologist at British Weather Services, Jim Dale, said the likelihood of frost will increase as you move North.

He told Express.co.uk: “[Frost] will depend on the cloud cover.

DON’T MISS:
UK weather forecast: Snow in MAY? Polar blasts threatens big freeze [REPORT]
‘Dense fog’ set to plague the UK as spring sunshine ‘stuck in a rut’ [ANALYSIS]
How to keep your plants watered while you’re on holiday [INSIGHT]

“The further north you go the more likely.

“The cloud cover will start to break up over the weekend, a little bit more than it is at the moment.

“It’s basically keeping the frost at bay for the most part over the next few days, but over the weekend the cloud breaks up a little bit more.

“If we do see [frost], and I think there’ll be one or two around, it’s dry air, so we’re not going to see white frost.

“You’re just going to see minus temperatures – -1C, 0C, 1C or 2C – particularly if we get sufficient cloud breaks, particularly in valley areas.

“So it’s obviously the Glens, the valleys of the Pennines and Cumbria and places like that.

“Gardeners need to be aware. It is a threat to small plants, budding plants.”

Speaking about the possibility of rain, he added: “We’re going to start to get involved with the Atlantic and frontal systems, with low pressure rather than high.

“So the rain situation will build across that first and second week in May.

“So then we won’t be using that word drought at all, it will be the opposite, particularly the western areas, they’re going to see some reasonable amounts of rain.”