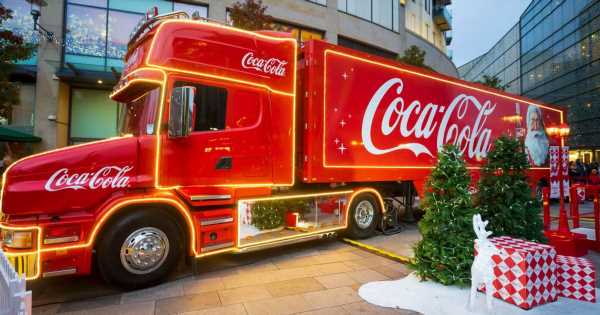 The Coca-Cola Christmas Truck is officially moving down the UK even further as two new locations have been added to the 2021 tour dates.

As this week starts, Brits have been treated to more dates and locations the famous Coca-Cola Christmas truck will visit proving 'Holidays Are Coming' indeed.

Last week, Manchester enjoyed two days over the weekend with the drinks giant as the big red vehicle was spotted at The Trafford Centre.

But the HGV, with a large drawing of Father Christmas himself with rosy cheeks, is now on the move this week.

When is the Coca-Cola Christmas Truck's next stop and date?

Tomorrow, (December 8) it'll stop in Wolverhampton as it continues its travels down the British Isles.

Fans will be able to see it for themselves in Market Square for nine hours, between 11am and 8pm.

Next, it'll rev its engine to venture into Wales for its first stop in the country – with Cardiff being the initial location.

Over two days, between December 9 and 10, Coca-Cola fanatics will see the Real Magic Christmas Truck at St David's Centre.

Where has the Coca-Cola Christmas Truck been?

The tour began in Scotland, with Glasgow in the final week of November before it drove down to the northern parts of England.

Brits living in Gateshead, Leeds, Castleford, and Sheffield have all enjoyed the festive lights and iconic colour of the truck as the festive season approaches.

The Christmas truck, which has become a tradition ever since it first appeared in Coca-Cola's iconic 'Holidays Are Coming' advert, is now a vital marker that Christmas is on the way.

Fans were devastated last year when the tour had to be cancelled to avoid crowds gathering amid the UK's fourth lockdown over the holiday season.

Where is the Coca-Cola Christmas Truck going?

Have you had a chance to see the Coca-Cola Christmas Truck this year? Let us know in the comments below!

The drinks company is doing things differently this year. Usually, they'll tell fans a full list of locations and dates ahead of time so families can plan when to come down to see the event.

However, to ensure crowds remain at a minimum, Coca-Cola is instead, announcing dates and locations of the truck tour a mere few days beforehand.

It means fans will have to be on the lookout and follow the truck on the journey to ensure they don't miss the opportunity to see if near them.

Not only is it a perfect chance to grab a gorgeous festive photo for December, but Brits also love receiving a complimentary can of the tasty drink when they arrive.

So you can get your hands on a free Coke if you venture down.