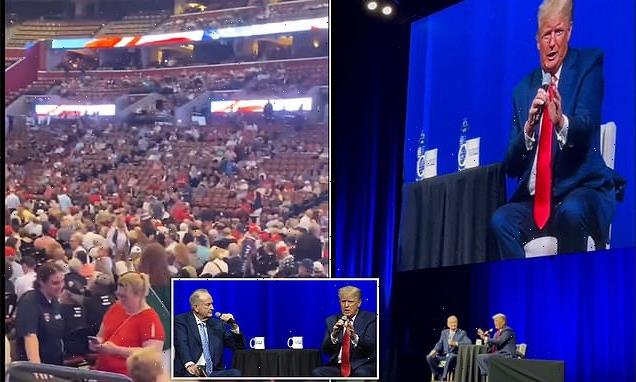 ‘I liked him,’ Trump said of Obama, The Sun Sentinel reported – even though the crowd booed upon hearing the former president’s name.

Trump added he thought Obama was ‘smart and sharp.’

During the event, Trump continued to excuse the events of January 6, claiming there was ‘love in the air’ during the Capitol riot.

He said only a ‘tiny fraction’ of his supporters were the ones invading the Capitol that day, claiming most people were there to protest the electrons results and ‘loved each other.’

‘There was love in the air,’ Trump said. 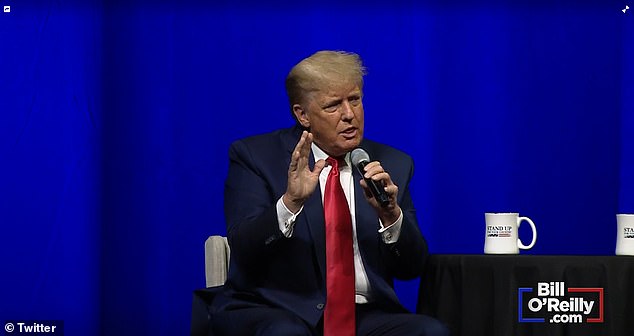 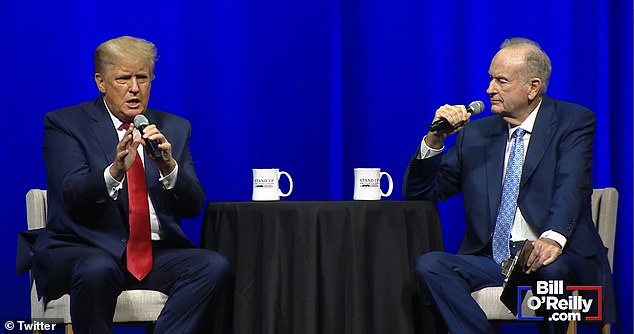 O’Reilly joined Trump Saturday for the first night of their four-day History Tour in Sunrise, Florida.

‘We had a great time in Sunrise, FL yesterday,’ Trump wrote in a statement Sunday afternoon. ‘Very exciting, informative, and fun.’

He previewed a rally there in the future, writing: ‘We will be back in the area for a major rally in the not too distant future. See you then!’

According to the Sentinel, the event location at FLA Live Arena had many empty seats – so much so that the top level of the venue was closed and ticket buyers were ‘upgraded’ to the lower levels.

The Huffington Post noted that tickets remained for the event in Sunrise on Saturday. And there are still available tickets for the remaining three days of the tour in Orlando, Florida on Sunday; Houston, Texas next Saturday; and Dallas, Texas next Sunday. 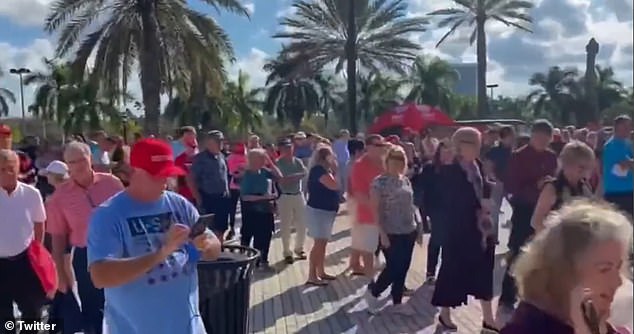 Video posted Sunday showed supporters arriving at the FLA Live Arena to watch Trump and O’Reilly on their ‘History Tour’, which will also travel to Orland on Sunday and Houston and Dallas, Texas next weekend

The remaining tickets for the event on Sunday at the Amway Center are going from between $36-$252.

The Texas events have far from sold out with Houston tickets starting at $59 for nosebleeds in the Toyota Center and the best seats going for $1887 each. In Dallas’s American Airlines Center, Trump supporters can buy their tickets between $50-$4687.

During his first of four events with O’Reilly for the History Tour, Trump suggested there should be new libel laws to help quell the media.

‘That’s better than my solution, which is a machine gun,’ the former Fox News personality responded.

Before Trump’s positive comments aimed at Obama on Saturday, he spent several years in a feud with the former president. Trump, while still a private citizen, spent years promoting the ‘birther’ conspiracy that Obama was not born in the U.S. – and therefore could not serve as president.

After becoming a politician, Trump claimed that Obama was the ‘founder of ISIS’ and ‘one of the worst presidents in the history of the United States.’

Despite a rocky election season in 2016, Obama still wrote Trump an Inauguration Day letter and left it in a drawer in the Oval Office. Trump said at the time it was ‘beautiful.’