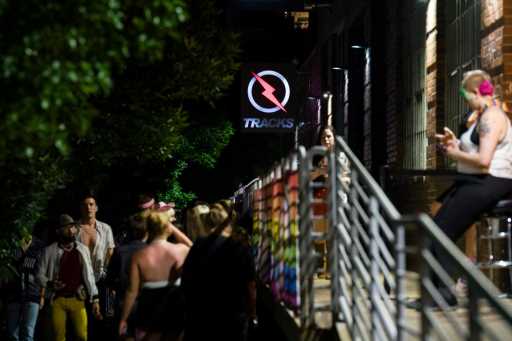 The story of beloved Denver LGBTQ bar Tracks is about $2 million away from being made into a movie.

One of Denver’s oldest and most well-known LGBTQ nightclubs, Tracks originally opened in the 1980s in what is now the Union Station neighborhood (but what was then a warehouse district lined with railroad tracks and known as the Bottoms because of its proximity to the South Platte River). It later moved to the River North Art District, where it now hosts theme nights and dancing.

But in addition to being a popular nightclub, Tracks also once served as a place of refuge — even a home — for members of the LGBTQ community who had nowhere else to go.

That broader significance is something Denver-based filmmaker and Colorado native Shawna Schultz realized while conducting interviews for a memorial video that her production company had been asked to do about Tracks co-founder Marty Chernoff, who died in 2019.

Through these stories, Schultz discovered that Chernoff not only housed members of the LGBTQ community in the Tracks building, but also helped pay health care bills for people with AIDS.

“When I was digging deeper into the stories that we were hearing, ultimately, the goal was to hear about Marty … but what came out of those interviews was this deep, deep sense of belonging for people that had no place to belong, or maybe they felt that way,” Schultz said.

Schultz re-edited the memorial video into a short documentary about Chernoff’s life that aired on Rocky Mountain PBS in June 2021, during Pride week (the doc, “Remembering Marty Chernoff,” was nominated for a Heartland Emmy in the Nostalgia category last month). Still, she couldn’t shake a strong feeling that she wanted to do more with Tracks’ story.

Now, her idea for a feature-length film, tentatively titled “Making Tracks,” has raised about half of the $4 million needed to start production. In the past, Schultz’s company, Mass FX Media, has created graphics packages for films like “The Social Dilemma” on Netflix and “Friends: The Reunion,” but this would be its first feature.

If the fundraising goals are met, Schultz and her team — which includes Andrew Feinstein (current Tracks owner and son of Tracks’ other co-founder Neil Feinstein) as executive producer, Stephen Beer as screenwriter, and Marin Lepore, Anthony Morgan, and Mitch Dickman as producers — intend to film the entire movie in Colorado, and as much as possible in Denver. Schultz’s dream is to transform the inside of the current Tracks into an ’80s version of itself for the film.

The scripted drama is set in the late 1970s and follows a narrative arc into the early ’90s. It tells the stories of Marty, a character based on Chernoff, and Ricky, a fictionalized teenager who winds up at Tracks and finds a place to belong after being kicked out of his home when he comes out to his family as gay. Ricky is a composite character based on the interviews Schultz did.

Schultz said she’s always dreamed of directing a film, and is excited to see it rapidly becoming a reality. Her team is pausing fundraising for the time being to cast its two main characters, and she hopes attaching big-name actors to the project will help it raise the rest of the money from distributors, sales agents, and other funders.

Schultz said Chernoff was an unlikely leader when it came to gay rights. A straight businessman, he never described himself as an activist. But after researching his life, Schultz believes his actions proved he was.

“I think it was a cover. I think he was an amazing activist, but I don’t think he wanted the credit,” she said. “My perspective is that I think he also respected the agency of the LGBTQ community to be their own leaders. I feel like he felt, as an ally, he needed to make the space and then step aside and allow them to fill that space with what it needed to be.”