Footy-mad Melburnian Gary Marchant was ready for "whatever it takes, whatever pain, whatever risks" to keep his remarkable grand final attendance streak alive. 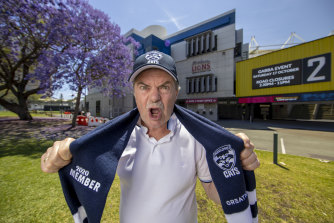 But the odyssey does not end on Saturday: Mr Marchant will fly from Brisbane to Sydney to watch his beloved Melbourne Storm play off in the NRL decider the very next day.

Before COVID-19 wiped out crowds at the beginning of the 2020 season, he had even managed to get to every Melbourne Demons game – home or away – since 1981.

Round one this year was the first time he'd ever watched a Demons game live on TV.

"I’d basically given up on the grand final and then I heard someone say 'just go to the Northern Territory'. That triggered it," said Mr Marchant, who bought a $1600 corporate package to bypass the uncertainty around ticket allocation and crowd sizes.

"They're just in my blood, I guess. I just love the whole thing and I think it will be great to be at a grand final [at the Gabba] – not that I want it there all the time."

But Mr Marchant, the president of the Melbourne Football Club volunteers, had to leave behind his 91-year-old mother Joy, who will be missing only her second grand final since 1945.

The first time was in 1958, when she gave birth to twin daughters right about the quarter-time siren, Mr Marchant says. Most years, he and Joy can be found first in line outside the MCC members to snare coveted seats in front of the coaches boxes. 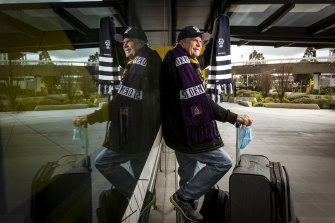 Gary Marchant when he set off from Melbourne to Darwin in late September to make sure he didn’t miss the footy finals in Brisbane.Credit:Chris Hopkins

"She's a Geelong supporter and I think if they made [the grand final] that would be sad for her.

"But I know she’d rather be safe at the moment and she does feel safe at home. That’s why she couldn’t come and isolate. I brought a Geelong scarf for her. I have a Richmond scarf, too, to represent my wife."

Mr Marchant was made a Melbourne life member in 2005 and has even served stints as a stats man to coaches Ron Barassi, Neil Balme and Neale Daniher.

If that wasn't enough, he also does the laundry for the Storm and A-League soccer club Melbourne Victory.

Why Darwin? Queensland's borders are closed to Victorians, meaning the only viable route to the grand final was via the Northern Territory and a mandatory fortnight quarantine at an unused workers' village in Darwin's rural area.

For $2500, COVID refugees get three meals a day, regular testing and, upon leaving, a certificate looking very much like a diploma that declares they are COVID-free and safe to travel.

While frowned upon by the Victorian Health Department, which maintained no one was supposed to leave the state for the purpose of fun, the Northern Territory government has been welcoming southerners, so long as they spend a little money before leaving for Queensland. 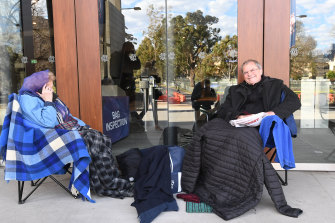 Gary Marchant and his mother Joy camp out for seats at the 2018 grand finalCredit:Justin McManus

In a stroke of good fortune while in quarantine, Mr Marchant met another Dees fan, Mick, who offered up the spare room in his Gold Coast apartment.

For the last week, Mr Marchant has been enjoying the sunny weather and open nightlife with a new ready-made set of Queensland friends.

But for all the planning, and luck, there have been nervous moments. Mr Marchant was warned by staff at Melbourne Airport the Northern Territory government could effectively deport him back to Victoria upon landing.

"I said to her, 'I think I'm going to faint' and she lifted the barrier and told me to sit on the chair. She asked if I was OK and I said 'no not really'." Mr Marchant made some calls and, discovering the threat was false, he boarded the plane.

"I'm very conscious about an outbreak still," he said from Brisbane. "I'm not counting any chickens yet. But every day that goes past it's another day until the final hurdle."