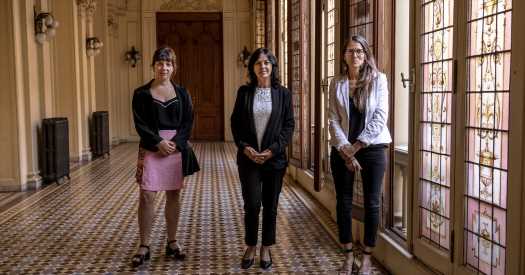 “We’re not against men. All we want to do is take apart a system that has abused and hurt women.”

— Vilma Ibarra, the top legal adviser to the president of Argentina

In Her Words is available as a newsletter. Sign up here to get it delivered to your inbox.

In his annual speech before Congress in March, President Alberto Fernández of Argentina did something few, if any, of his predecessors had done before: He dedicated a large chunk of the 90-minute speech to the “rights of women.”

He vowed to help mothers get back to work by building more preschools and said that “the fight against gender violence” should be a top priority for everyone in Argentina.

The speech came just months after the country became the most populous in Latin America to legalize abortion, fulfilling one of Mr. Fernández’s key promises during his campaign for president.

Mr. Fernández may be the spokesman for this feminist agenda, but behind the scenes, three womenwho refer to themselves as “feminists” and “activists”, are driving the change: Elizabeth Gómez Alcorta, the country’s first minister of Women, Genders and Diversity; Vilma Ibarra, the president’s top legal adviser who has the authority to write bills and decrees (she wrote the country’s landmark abortion bill); and Mercedes D’Alessandro, the country’s first national director of economy, equality and gender within the Economy Ministry, and the author of “Feminist Economics.” 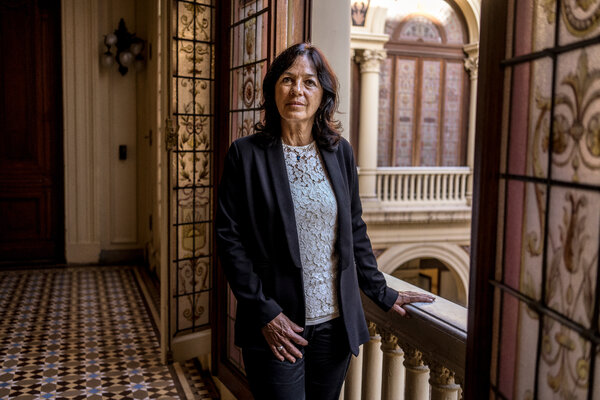 Mr. Fernández was inaugurated in December 2019, just months before the coronavirus pandemic hit Argentina. Almost immediately, the three women — Ms. Alcorta, Ms. Ibarra and Ms. D’Alessandro — sprang into action. They worked across government departments and organizations to classify shelters for survivors of gender-based violence as essential services during the lockdown. They turned pharmacies into spaces where survivors could use a code word (“red face mask”) to discreetly indicate they were being abused so that the pharmacist would then call the police for them. They set up emergency food delivery systems and sent cash payments to the unemployed, as well as informal workers and domestic helpers — a majority of whom are women — to make up for lost income.

The country was quickly ranked by the United Nations as having the highest number of gender-sensitive Covid-19 responses in the world.

Ms. Alcorta, Ms. Ibarra and Ms. D’Alessandro spoke with In Her Words from the Presidential Palace in Buenos Aires about the next big items on their policy agenda and how their WhatsApp group of female government leaders is helping to shake up what is still a male-dominated space.

The conversation has been translated and condensed.

Argentina leads the world in its gender-sensitive responses to Covid-19. Could you outline exactly what those measures are?

Elizabeth Gómez Alcorta: Most of the measures we adopted fall within three groups.

The second group is focused on food emergencies, especially with regards to the trans community. Trans people are particularly vulnerable in our country and many, even today, earn a living from prostitution. So we established measures for them, including food delivery to their homes and protections to prevent them from being evicted.

The third group is focused on emergency family income, which reached nine million people in Argentina, a large share of whom were women and people in highly vulnerable situations.

Mercedes D’Alessandro: The emergency family allowance was done with the understanding that many women work in the informal sector. So when we introduced the support measure, we focused specifically on women in precarious positions. We also gave women access to this emergency allowance if they work at home, so-called housewives. This was a way to recognize unremunerated, unpaid work.

For all of us, it’s a priority. We understand that the work done by women at home, including care work, is a fundamental pillar of social life and the economy. Often, when you use the word “worker,” you think about someone collecting a salary. But here, we look at a “worker” as someone who does work, even if it’s unpaid, to support her family.

How do you respond to critics who say that a focus on women and gender equality should not be a priority when we’re dealing with an economic crisis and a pandemic?

Alcorta: From Day 1 of his administration, President Fernández said he was going to start at the bottom, with the most disadvantaged, and there is no doubt that it is always women who are worse off in all societies; especially poor women.

There may be criticism but where do you want to begin? And who do you want to support with your policies? The president has made it very clear that this is especially important not just institutionally, but also — if you look at it in terms of investment — every peso that has gone into the budgets for these areas helps make our societies more fair.

D’Alessandro: When the pandemic broke out in Argentina and the lockdown was put into effect, economic activity for men and women fell by 10 percent. When things started to open up, men recovered their jobs much faster than women. Today, based on the data we have for the third quarter of 2020, we see that women’s economic activity mirrors their economic activity from 2002 — so we went back two decades! We can’t pause the agenda right now — on the contrary, we need to boost it and keep going.

In August, the Economy Ministry published a report on the unpaid care economy. It found that unpaid care and domestic work amount to almost 16 percent of G.D.P. — making it the largest sector of Argentina’s economy — and that 75 percent of care work is carried out by women. What are your plans to address the gender gap in unpaid domestic work and care?

Alcorta: The Ministry of Women, Genders and Diversities has created a special office to deal with care policies. In February 2020, we put together an inter-ministerial commission, including 14 ministries and strategic departments, focused specifically on crafting care policies.

We’ve also announced the creation of 800 kindergartens, nurseries and day care centers around the country, and we also want to look at leave policies to be shared by parents — so paternity and maternity leaves — to create more equality at the workplace. Before President Fernández’s administration, we didn’t have any of these things that we are now looking at.

D’Alessandro: In the pandemic, we found that activity in the unpaid care sector is the only sector that went up, while all other sectors fell. So, it’s important from an economic standpoint. And those 800 day care centers — they are not just creating a physical space where children will be looked after, but they’re also a way to create jobs and opportunities. When you create a new system, you are professionalizing the care work and you are also recognizing the value of that work.

Violence against women is a big problem in Argentina. The number of women killed reached a 10-year high during the lockdown, and there have been major protests against violence dating back to almost six years ago. Why is this still happening?

Alcorta: The femicide rate in Argentina has remained high for the past 20 years and those of us who study this phenomenon know that there are many issues that create the conditions for extreme violence. Often, higher inequality is correlated with more violence. Gender stereotypes also have a lot to do with this as does the culture — some Latin American societies are more tolerant of this violence. And of course, there are the shortcomings in the state agencies, like the police. Until 2015, Argentina didn’t officially track femicides. They used to be called “crimes of passion.” And there was no institutional structure that looked into violence against women, so we created a nationwide, federal agency.

The changes needed are huge and structural in nature so they can’t be resolved in a couple of years or with one administration.

The president has made gender equality a priority, but women are still a minority among ministers and other high positions in government. Will that change?

Ibarra: Not so many years ago, there weren’t any women at all in high-ranking positions and the creation of the Ministry of Women is a major highlight of this administration. Now, is that enough? No. But we are much better off than where we used to be.

We started a group on WhatsApp called “Women in Government” — a network of more than 250 women. And we get together, we have discussions, we share experiences and help one another. It’s important because we come from a culture that is male dominated and it’s easier for men to team up. So each woman and feminist who joins the government is opening up doors to change things.

Alcorta: This administration has the highest share of women in high-ranking positions — 37.5 percent, compared with the previous administration which had 22 percent. Certainly, as you go up to the level of ministers, you see that share get smaller. Argentina was also the first country in Latin America and the Caribbean that set a gender quota for Congress in 1991 and, since 2017, we have a parity law for Congress.

Until we took office 13 provinces had parity laws, and there was still another 10 left. Last year, seven provinces implemented provincial parity laws as well and now we have three left. One of our goals is to work with those remaining provinces so that all provinces have parity. This is a process — participation in Congress allows women to also become officials in the executive branch.

D’Alessandro: We can advocate laws related to gender parity and request that women are represented in the high levels of government and in Congress, but we still have many serious problems. In the judiciary, there’s a clear gender gap, but also in trade unions and in the business sector. I think this demonstrates the difficulties of society, which, at its core, is still a male-dominated patriarchal, unequal structure with clear discrimination against women. That’s what we need to fight.

It’s fascinating that you often call yourselves feminists and activists. That kind of language is rare — maybe even radical — for government officials. Do you face any backlash for that?

Ibarra: Yes, but we welcome that. Whenever someone says, “Where is the ministry for men?,” we say, “Well, men don’t need to get together and defend their rights and that’s great. But we need to make sure that women have the same rights.” That’s why we are feminists. We’re not against men. All we want to do is take apart a system that has abused and hurt women.