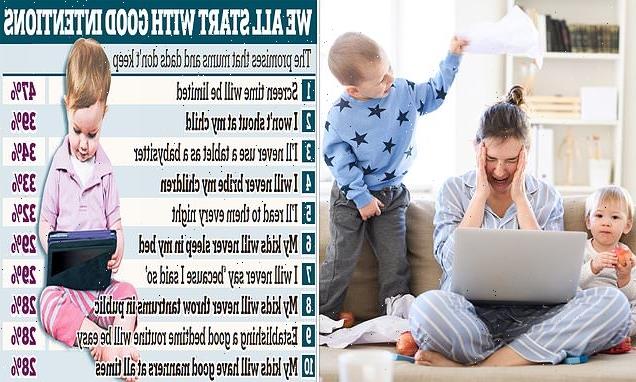 Limiting screen time, never shouting and not using a tablet as a babysitter are the top vows we break on becoming parents, a poll reveals.

The survey of 2,000 British mums and dads found 85 per cent look back and laugh about the sort of parent they thought they would be.

Some 81 per cent said it was impossible to know how hard being a parent was until you had children, with the same proportion saying it was the biggest learning curve of their lives.

Top of the list of broken vows, with 47 per cent of the vote, was the intention to always limit kids’ screen time. 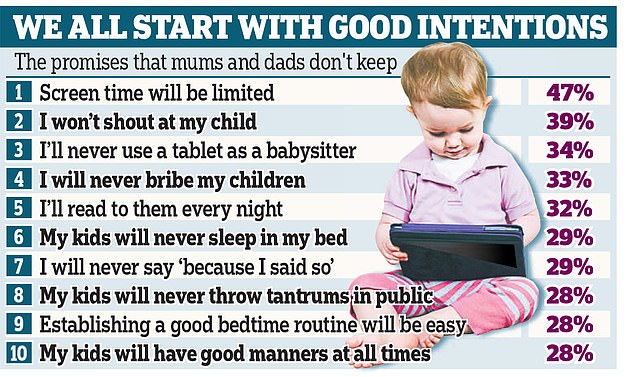 More than two thirds (67 per cent) of those polled by Play-Doh said there was often overwhelming pressure to be a ‘perfect’ parent, which left them feeling like a failure – with 72 per cent blaming social media. Other factors that pile on the pressure include fellow parents (46 per cent), family members (40 per cent) and friends who don’t have children (34 per cent).

The study also revealed the tips parents would give to those planning to have children. Topping the list was ‘there will be hard days but it’s worth it’ (68 per cent), along with ‘don’t feel embarrassed if your child has a meltdown in public as it’s normal’ (62 per cent), and ‘you’ll miss these days when your kids are older’ (51 per cent).

Play-Doh has launched a Parenting is Messy campaign in a bid to celebrate the unspoken truths of having kids.

Spokesman Nicola Fox-Haggarty said: ‘Our research reveals the expectations versus reality of parenting – and how many of the preconceptions we have about family life turn out to be completely wrong. Parenting is Messy is all about celebrating the less polished moments in people’s lives as parents.’