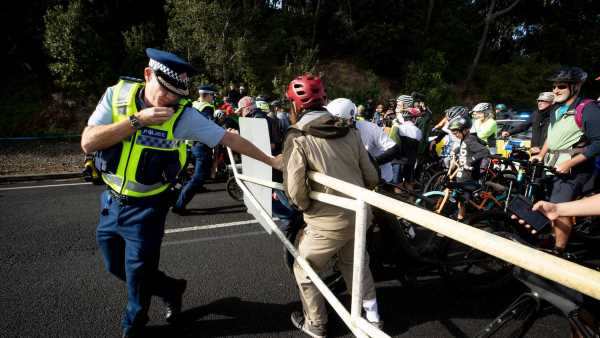 Exactly what are we missing out on so that bike/pedestrian bridge can be made?

It’s a question that has framed the rather binary parameters of Auckland’s road space debate in the past few weeks.

Sparked by the May 30 harbour bridge protest, all sorts of arguments have highlighted the apparent lack of consideration and sense, as well as entitlement in both the initial protest and subsequent government announcement of a new stand-alone crossing for cyclists and pedestrians.

For those of us who have never given a thought to biking over the harbour bridge, unfortunately, some of these basic phrases may seem far more relatable than a lot of the proposed benefits for a cycle-friendly bridge. Particularly in the context of the estimated $685 million price tag for the recently announced crossing.

For me, that disconnect was best captured by Auckland Councillor Fa’anana Efeso Collins and Manurewa’s Rowandale School principal Karl Vasu. Speaking to 1 News, the pair pointed out how different the police presence looked at the May 30 protest to events and occasions in their communities.

“When you’re handling poorer people out south, you’re treated one way by the police, and when you’re managing people who are wealthy and in lycra you’ve got a completely different approach by the police,” Fa’anana said.

For the record, Fa’anana supported the premise of the protest. Police also arrested a 47-year-old man for breaking the police cordon at the protest. He has since been cautioned in relation to obstruction and resisting police. Unsurprisingly, police also rejected claims of lenient treatment, and pointed out that a number of protests occurred each week in Auckland “more often than not” without incident or arrests.

Despite that, the sentiment summarised by Fa’anana and Vasu shouldn’t be dismissed. It delves into the tough territory of what access via bike and on foot to the Harbour Bridge actually means for all Aucklanders – not just those who made it to that Sunday protest.

Absolutely, there’s a mass of research that shows freeing up space for cyclists and pedestrians will have long-term benefits around congestion, lifestyle and health for all road users. But it’s a point easily missed when you don’t see yourself, or anyone around you being able to live a better life by having more ways to get to and from the North Shore.

It then seems even more abstract when points of comparison on the issue are around police behaviour – and how crowds in that part of town seem to get off lightly. In a city cut along socio-economic and often ethnic lines, that means a lot. It amplifies that distance between communities, and the haves and have nots of issues like infrastructure, roads and public transport.

It also means discussions about moving towards a more liveable, bikeable city can, and often do, descend into super-charged tribalistic bashing. And, as much as we’d like to disregard it and repeatedly point to “evidence” and “best-research”, being too dismissive further alienates those keen for genuine change but unable to see where their communities fit in.

Manurewa-Papakura councillor Angela Dalton homed in on the issue this week. Referring to the recent central government announcement to effectively suspend the Mill Rd arterial road project between Manukau and Drury, Dalton said the recent spate of decisions raised questions about funding disparities for south Auckland, particularly given the public perception that cyclists on the Harbour Bridge broke the law then were rewarded for it the next week with the announcement of a special crossing.

In this instance, perhaps the best place to start is to acknowledge that while some households firmly understand the benefits of a cycle and pedestrian-friendly harbour crossing, others see it simply as another mark of differential treatment in Auckland.

From there, we can talk about why people are really divided over cycling – and the misapprehensions and mistruths the debate has managed to promote so far.