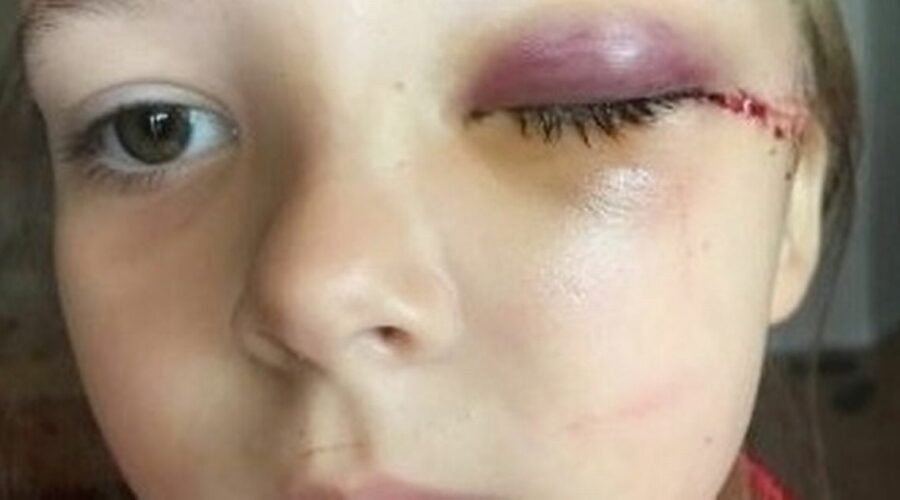 A distraught mum has sent a warning to other parents after her six-year-old daughter almost lost her eye when she collided with a ceiling fan.

Savana was playing on her friend's bunk bed when the ceiling fan slashed below her left eye before she had a chance to duck.

The laceration was more than 8cm long and 2cm deep and needed a metal plate, four screws and over 100 stiches.

Jess Pierce, Queensland mum, said: "An MRI scan showed Savana had a shattered cheekbone. Her eye was so swollen, it was impossible to tell if her vision had been compromised.

"The following day, Savana went into theatre for plastic surgery. In a three-hour procedure, the surgeon put her cheek back together with a metal plate, four screws and 100 stitches.

"Amazingly, the fan blade had missed her eyeball by just one millimetre, skimming her lower eyelid and across to her ear."

Jess says she warned her daughter about the ceiling fan when she spotted it in her friend's bedroom. Her niece had recently been injured by one.

Savana is still recovering five months on from the incident and has permanently lost the lower eyelashes on her left eye.

Jess said: "She loved playing outside, but now has to avoid the sun to minimise scarring. It’s likely it will never completely fade.

"Instead, she’s been practising dancing and listening to music with her siblings inside."

Six-year-old Savana has been taking part in pageants since she was four-years-old and has always loved dancing and giving speeches on stage.

She had been invited to take part in a contest in Las Vegas to represent Australia before the incident.

"Incredibly, she just took it all in her stride. Discharged two days later, we still didn’t know about her eyesight.

"Back home, though, Savana suffered nightmares and was too afraid to go to school in fear of what her peers would think.

"Around 10 days after the accident, Savana could open her eye for the first time."

Despite the traumatising injury, Savana is already practising for a pageant in July and is hoping to defend her title as Petite Miss Australia Regency International.

Jess added: "No matter the outcome though, she’s always a winner to me."