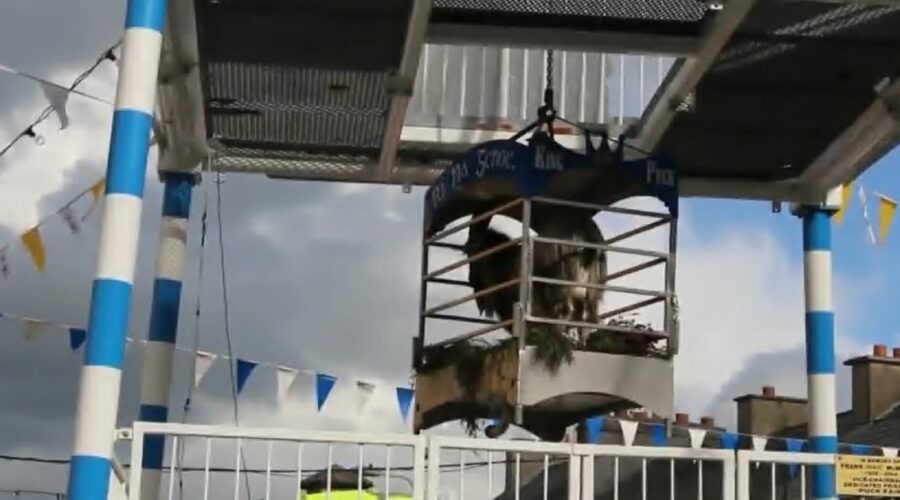 Animal lovers have been left horrified after seeing a video of a goat that had been left hanging in a cage above the noisy County Kerry’s Puck Fair, Ireland.

The clip, which was shared on Twitter by Ban Blood Sports, shows the animal locked inside a small metal cage that is swinging with every movement it makes as a bloke below is heard loudly speaking over a microphone.

It has been alleged that organisers left the goat there for three days, prompting animal activists to call for an end to the "cruel" treatment of goats at the festival, which is held in every year.

READ MORE: Intoxicated bear cub high on ‘mad honey’ had to be rescued from the forest

One user said: "This is shocking. A new low in abuse and cruelty. To capture a wild animal and subject him to this is hideous and obscene. Please let him go."

Another added: "Stop this madness and cruelty."

A third commented: "I'm staggered! Why do they feel the need to do this to the poor animal!?!"

A fourth wrote: "Maybe one of the organisers would be better suited to sitting in the cage for 3 days."

Ban Blood Sports tweeted: "Caging a wild goat and holding him captive in an elevated cage for 3 days and 2 nights in the middle of a noisy festival should not be allowed. Join us in urging Minister @McConalogue to order #PuckFair organisers to RELEASE THE GOAT."

The Puck Fair traditionally takes place each year on August 10, 11 and 12, seeing a wild goat spend the bulk of its time on 50ft stand overlooking the town.

The ‘puck’ is looked after by a team of goat catchers, while a local vet monitors the goat’s health and he is given a full health check before his coronation and being hoisted on the stand.

However, people have started to object to the 400-year-old tradition as it has had three years off during the Coronavirus pandemic.

More than 20,000 people have signed an online petition to stop Puck Fair as they claim the tradition is “unacceptable”.

The fair’s spokesman Declan Falvey has now been forced to defend the festival, as he said: “The water is changed on a regular basis and a local farmer sources the best of heather. We will make sure we will look after the goat.

“This is a wild mountain goat, used to living on heights. We will do everything in our power and if it means keeping him down we will keep him down."