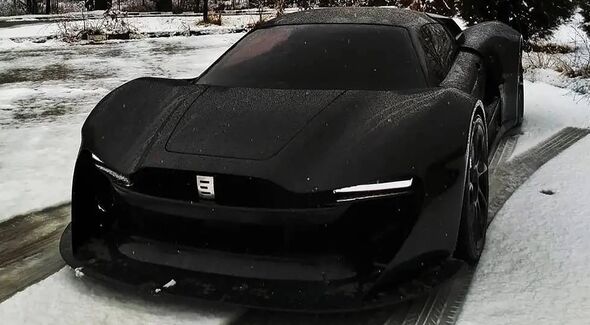 The Taliban claims to have produced the first-ever supercar designed and built in Afghanistan. The hardline Islamic fundamentalist regime unveiled the sleek black sports car sharing videos of it surrounded and fawned over by crowds of bearded men.

Express.co.uk has approached the country’s Technical and Vocational Education Department for the specifications of the vehicle, including top speed and production expectations but has yet to receive a response.

The regime did say the Mada 9 was created by makers ENTOP and Mohammad Reza Ahmadi and that a prototype was produced over five years by 30 engineers led by Ahmadi.

The Mirror reports the supercar-looking creation has an engine under the bonnet from a Toyota Corolla so it is not clear if the vehicle has the performance to match its looks.

Various videos have been shared online showing the Mada 9 and in some of them, the car is moving, but not at great speed.

Zabihullah Mujahid, a spokesman for the Taliban, posted a video on Twitter of the car in the snow and said it was the honour of the country.

The warlords’ mouthpiece said: “I would like to thank the Department of Vocational Education, under their umbrella, the country has been provided with valuable services.”

“It will start its journey in Afghanistan and will one day maybe go international,” he said.

In a New Year’s Eve tweet, Ahmadi added: “I thank God very much that I was able to finish the construction of Afghanistan’s first car.

“I would like to thank the great national businessmen and the dear people of Afghanistan who stood by my side during this time.”

Since seizing power in August 2021 the Taliban’s reputation for innovation has not been high, with many accusing the regime of regressing Afghanistan by taking away the rights of women to free speech and education.

A bizarre target of the Islamist group after they took power were shop mannequins, that some in the new government wanted beheading in the clothes shops of the capital Kabul. Instead many of the clothes-wearing objects have had their heads cloaked in cloth sacks or wrapped in black plastic bags.

On Friday a strong majority of the U.N. Security Council urged Afghanistan’s Taliban rulers Friday to immediately reverse all “oppressive” restrictions on girls and women.

The council then went into a closed meeting to discuss the Taliban’s latest ban on woman working for humanitarian groups, a move that is exacerbating the already critical humanitarian crisis in the country. The joint statement from 11 of the 15 council members said female aid workers are crucial to addressing Afghanistan’s “dire humanitarian situation” because they provide “critical life-saving support to women and girls” that men can’t reach. It reiterated the council’s demand for “unhindered access for humanitarian actors regardless of gender.”

The four council nations that didn’t support the statement were Russia, China, Ghana and Mozambique.

The 11 council members also urged the immediate reversal of the Taliban’s ban on girls attending secondary school and girls and women attending university as well as restrictions on women’s human rights and freedoms.

Diplomats said that some countries are pushing for a Security Council resolution demanding the Taliban reverse all its edicts on women and girls, that but it was too early to say if that would happen. David Miliband, CEO of the International Rescue Committee, a group that has worked in Afghanistan since 1988, said that last year its 8,000 staff, including 3,000 women, served 5.3 million Afghans across the country including 2.7 million women and girls.

Yesterday tributes poured in for Mursal Nabizada who was among the few female parliamentarians who stayed in Kabul after the Taliban seized power. She was shot and killed by gunmen at her home in Kabul on Sunday.

Karen Decker, the U.S. chargé d’affaires for Afghanistan, tweeted: “Hold the perpetrators accountable! Angered, heartbroken by murder of Mursal Nabizada – a tragic loss. I offer Mursal’s family my condolences and hope to see them receive justice for this senseless act.”