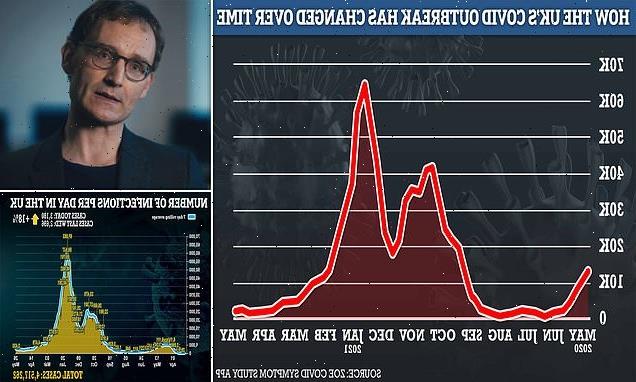 Britain’s coronavirus outbreak may not be spiralling out of control, despite fears the rapid spread of the Indian variant could threaten plans to ease lockdown restrictions next month.

The number of people falling ill with symptoms of coronavirus has fallen by up to 10 per cent over the last week, according to a symptom-tracking app.

Academics at King’s College London and health-tech firm ZOE estimate that 2,550 Britons — and 1,919 people in England — were becoming ill every day on May 23. For comparison, figures a week before stood at 2,750 and 2,132, respectively.

Professor Tim Spector, the epidemiologist behind the Covid app, admitted that the Indian variant was becoming dominant in the UK. But he said national figures ‘remain unaffected’, despite numerous measures saying that the outbreak is starting to get bigger with the quick growth of the B.1.617.2 strain.

Professor Spector claimed cases appeared to be spiking in hotspots including Bolton, Kirklees and Leicester but added: ‘Reassuringly, we aren’t seeing numbers rise in other surrounding areas.

‘Our data also indicates vaccines are still effective against the Indian variant and this is likely the reason why cases haven’t increased and hospitalisation and deaths remain low.’

The figures come after one of the Government’s top scientific advisers today warned that No10’s plan to ease all restrictions in England on June 21 hang ‘in the balance’ because of the Indian variant.

‘Professor Lockdown’ Neil Ferguson, an Imperial College London epidemiologist and key member of SAGE, said it would trigger a ‘small third wave’. But he said the next two or three weeks would be ‘critical’ in deciding whether it was safe to move to step four on the roadmap.

Meanwhile, another SAGE expert last night called for ministers to delay next month’s ‘freedom day’. Asked whether he would advise Boris Johnson to continue with plans to unlock fully next month, Professor John Edmunds, of the London School of Hygiene and Tropical Medicine, answered ‘no’ because ‘at the moment it looks a little bit risky’.

Top scientists are waiting for more data on transmissibility of the variant to model how badly the country could be hit by relaxing restrictions. Ministers are also waiting on hospital admission data to prove jabs are breaking the link between infections and serious illness.

But the picture on the Covid outbreak in England, as well as Britain, remains a mixed bag. Daily positive tests in the UK yesterday breached the 3,000 mark for the first time since April, and other surveillance studies have warned of a rise in cases across the nation. 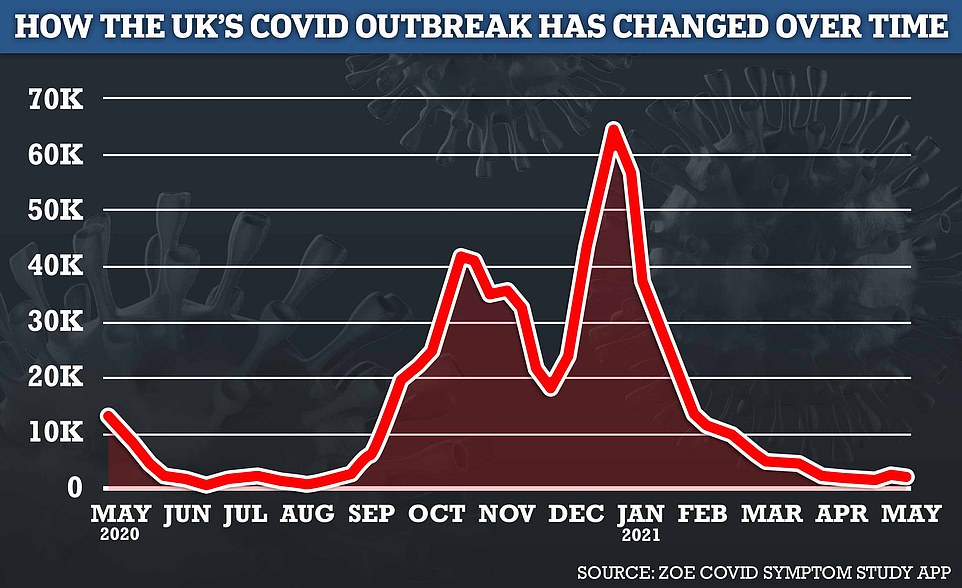 Academics at King’s College London and health-tech firm ZOE estimate that 2,550 Britons — and 1,919 people in England — were becoming ill every day on May 23. For comparison, figures a week before stood at 2,750 and 2,132, respectively 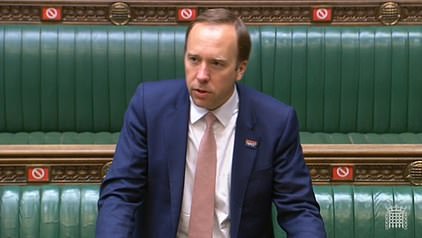 Matt Hancock today hit back at Dominic Cummings’ vicious attacks on his pandemic record including allegations he lied repeatedly, failed care home residents and should have been ‘sacked daily’ for ‘criminal, disgraceful behaviour’.

The Health Secretary told the Commons that the government had been ‘straight with people’ about the challenges that coronavirus posed and the difficult decisions.

‘These unsubstantiated allegations around honesty are not true,’ he said. ‘I have been straight with people in public and in private throughout.’

Mr Hancock also dismissed Mr Cummings’ criticism of his testing target, saying it was ‘how you get stuff done in government’.

‘I am proud of everyone in my department,’ he said.

The defiant comments came after he and Boris Johnson’s were accused of ‘disastrous’ handling of the pandemic that had cost tens of thousands of lives.

Mr Hancock will face the media at a Downing Street press briefing this evening as he tries to brazen out the storm.

Meanwhile, the PM set to answer questions as he visits a hospital this morning.

Government sources called the extraordinary onslaught from Mr Cummings a ‘character assassination’ that was ‘not backed by evidence’.

Senior Tories told MailOnline that the former No10 chief was engaged in epic ‘score settling’ and had a ‘selective memory’. ‘He should really have words with whoever was in charge last year,’ one said wryly.

Mr Hancock told the Commons: ‘Every day since I began working on the response to this pandemic last January, I’ve got up each morning and asked: ‘What must I do to protect life?’

‘That is the job of the Health Secretary in a pandemic.

‘We’ve taken an approach of openness, transparency and explanation of both what we know and of what we don’t know.’

The King’s College London estimates — made alongside healthtech firm ZOE, rely on daily reports from more than 700,000 Britons on whether they are feeling unwell, what symptoms they have and if they have tested positive for Covid.

But it is only able to pick up infections which trigger symptoms and misses asymptomatic cases — those which spark no tell tale signs of the virus — which officials estimate could be behind a third of all cases.

The app updated how its estimates are calculated last week because a large proportion of participants had already been vaccinated against the virus.

In its update today, the KCL academics said the figures suggest that new variants are ‘yet to have an impact on the number of new symptomatic cases’.

Around one in 1,500 people in the UK currently have symptomatic Covid, data suggested. But the rate is thought to be five times higher in the North West (one in 744) where the Indian variant is spreading rapidly, compared to the South West (one in 3,237).

Professor Spector said: ‘The Indian Variant is probably becoming the dominant strain in the UK but the national figures remain unaffected, despite fears the variant might start a third wave.

‘The hotspots we’ve detected this week include Leicester, Bury and Bradford and we are still seeing higher numbers in Aberdeen, Kirklees and Bolton.’

Matt Hancock is expected to be asked about the threat the mutant B.1.617.2 strain poses to England’s lockdown-easing plans when he holds a 5pm Downing Street press conference tonight.

No10 yesterday refused to rule out imposing local lockdowns to tackle the spread of the variant.

The Health Secretary is also likely to hit back at Dominic Cummings’ vicious attacks on his ‘disastrous’ pandemic record including allegations he lied repeatedly, failed care home residents and should have been ‘sacked daily’ for ‘criminal, disgraceful behaviour’.

Discussing the threat of the Indian variant on BBC Radio 4’s Today programme, he said: ‘We’re still working to assess exactly how much more transmissible it is.

‘But it has gone from being a small minority to a majority variant and that’s clearly of concern.

‘We know it partially evades the immunity generated by vaccines, thankfully if people have had two doses there’s still a large amount of immunity remaining but it’s not quite as much as before.

‘Step four is rather in the balance, the data collected in the next two or three weeks will be critical.’ He said by then ministers will be able ‘to come to a firm assessment of whether we can go forward’.

Professor Ferguson, whose grim modelling that hundreds of thousands of Brits could die without action prompted the first lockdown last March, said it was promising that infection levels were still low despite the new variant, with the latest ONS survey suggesting one in a thousand people in England are Covid positive.

He added: ‘The key issue on whether we can go forward is will the surge caused by the Indian variant – and we do think there will be a surge – be more than has been already planned in to the relaxation measures.

‘It was always expected that relaxation would lead to a surge in infections and to some extent a small third wave of transmission, that’s inevitable if you allow contact rates in the population to go up, even despite immunity. It’s just we can’t cope with that being too large.’ 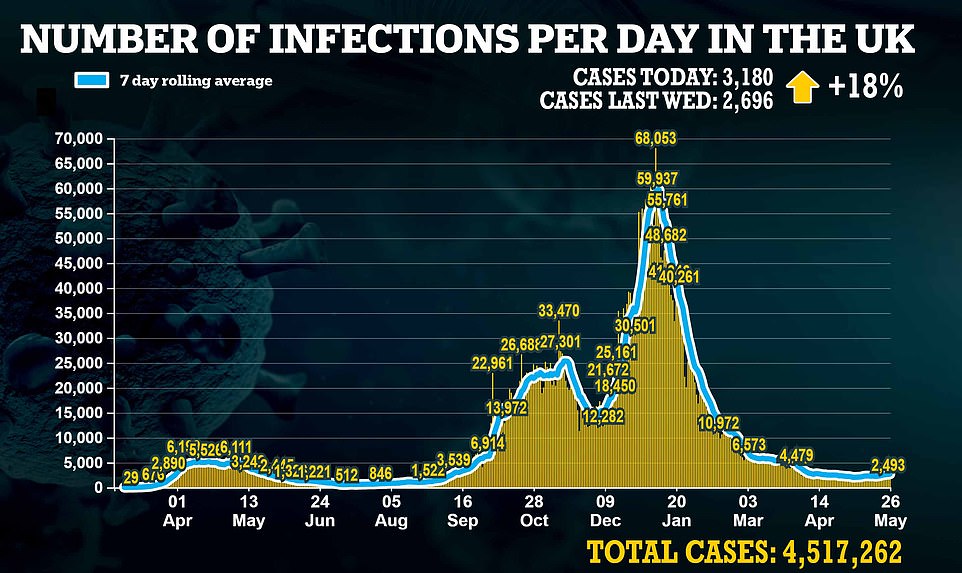 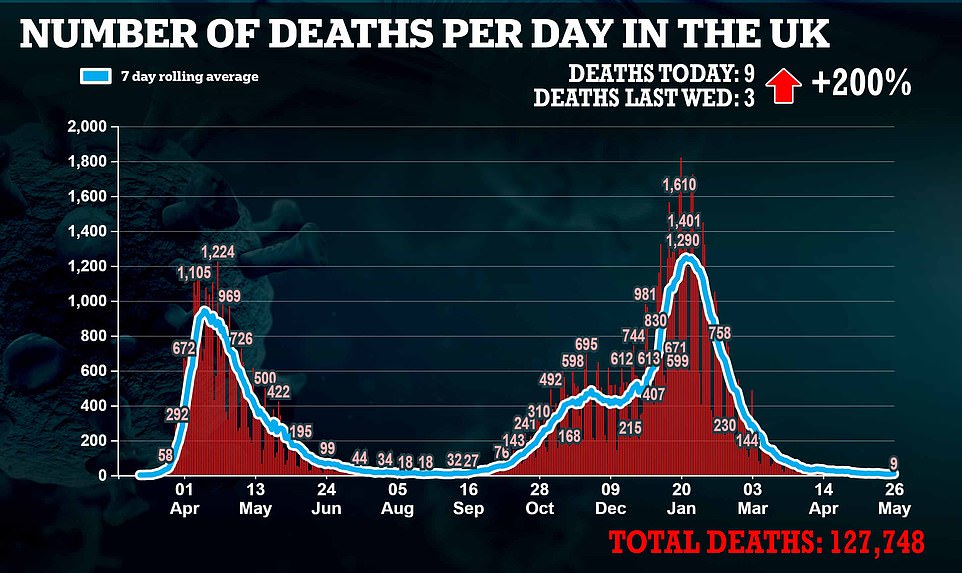 Daily infections (3,180) spiked by 18 per cent compared to last Wednesday’s figure, reaching their highest level since April 12 (3,568). But deaths remained in single figures, with nine fatalities today up slightly on the three posted last Wednesday 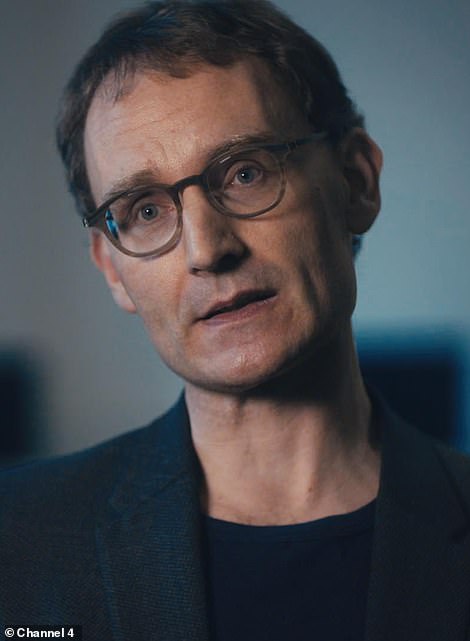 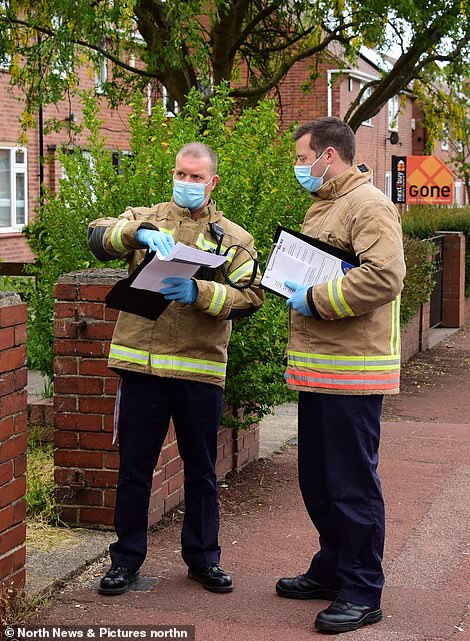 Professor Neil Ferguson (left) today warned the Indian variant would bring a ‘small third wave’ but the next two or three weeks would be ‘critical’ in deciding whether it was safe to move to step four on the government’s roadmap. Pictured right: Surge testing yesterday in North Tyneside 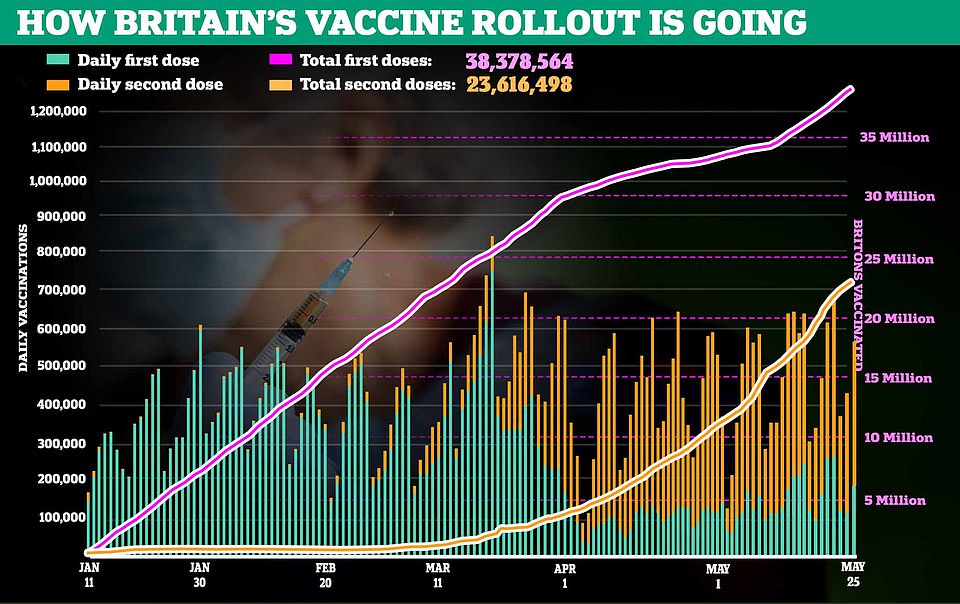 Britain’s mammoth vaccine drive continued at full steam ahead, with 387,987 top-up jabs dished out across the country yesterday. It takes the UK’s number of fully vaccinated adults to more than 23.6million

German scientists claim they have discovered why some coronavirus vaccines cause blood clots — and say jabs could be tweaked to stop the complication.

Two vaccines, one manufactured by Oxford-AstraZeneca and the other by Johnson & Johnson, have been linked to rare clotting disorders, particularly among women under the age of 50.

The clots — which can occur in the brain — are happening alongside abnormally low platelet levels, known as thrombocytopenia.

Now, researchers at Goethe-University of Frankfurt and Ulm University, in Helmholtz, say the problem lies in the adenovirus vector — a common cold virus used so both vaccines can enter the body.

They say the vaccines can be adapted to prevent the rare side effect from occurring, reported the Financial Times.

It comes after 18-year-old student Ellie Peacock, who suffered clots after receiving AstraZeneca’s jab in Australia, yesterday urged recipients to be aware and monitor any potential side effects.

Observing the rise in cases, Professor Ferguson — who is  dubbed ‘Professor Lockdown’ because of his role in the Government’s handling of the pandemic — said the increase had been anticipated.

Though he suggested restrictions could be extended beyond June 21, he also reassured that the country’s jabs roll-out meant the UK is in a ‘much better place’ than during the second wave in December.

The professor also suggested the country could cope if the Indian variant was proven to only be 20 to 30 per cent more transmissible — which SAGE scientists have argued is feasible.

‘Luckily we’ve still got low levels, but it is concerning.

‘And we are still not back to normal. We measure people’s contact patterns and we’re still at less than half of our normal contact patterns at the moment. So I think that is helping to keep the lid on it, to some extent.’

While hospital admissions (115) jumped by around 11 per cent compared with the previous seven days, according to the same statistics.

But he insisted they were not increasing ‘at an alarming rate’ and added: ‘The next seven days will be crucial, and trusts will be monitoring the data closely.’

He added that hospital admissions appeared to be of patients who had not been vaccinated, explaining: ‘This hammers home just how important it is to have a vaccination.’

28/05/2021 World News Comments Off on Symptomatic Covid cases in Britain FALL by 10% in a week, data says
Markets