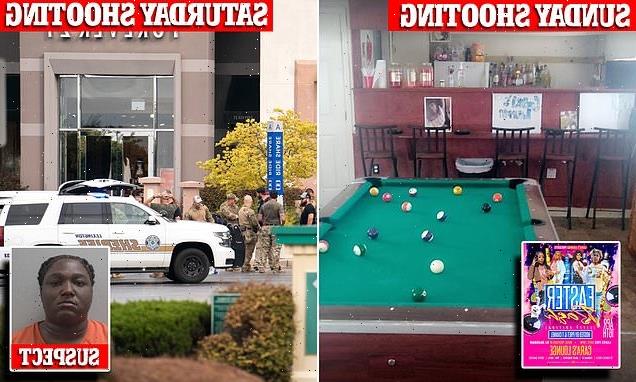 At least nine people were shot at a venue in South Carolina early Sunday morning just hours after 14 people were injured in a separate shooting at a mall in the state’s capital, capping off a deadly Easter holiday in the US.

The nine victims were shot at Cara’s Lounge in the small town of Furman.

The shooting happened while the venue hosted an ‘Easter Bash’ featuring exotic dancers and live music, according to an event flier posted on Facebook.

The South Carolina Law Enforcement Division is leading the investigation. There are no reported fatalities.

Information about the victims, the shooter or a motive has not been released.

About 98 miles north, a 22-year-old man was arrested in connection with a shooting at Columbia’s Columbiana Centre mall that left 14 injured on Saturday. Jewayne M. Price, 22, was arrested early Sunday and is expected to be charged with unlawful carrying of a pistol.

In Pittsburgh, two minors were killed and at least eight people were injured during a shooting at a house party early on Sunday during a holiday weekend that has ended in three mass shootings. A horrific video shows the moment hundreds of partygoers fled the scene of the Airbnb where the party was hosted as shots were fired. 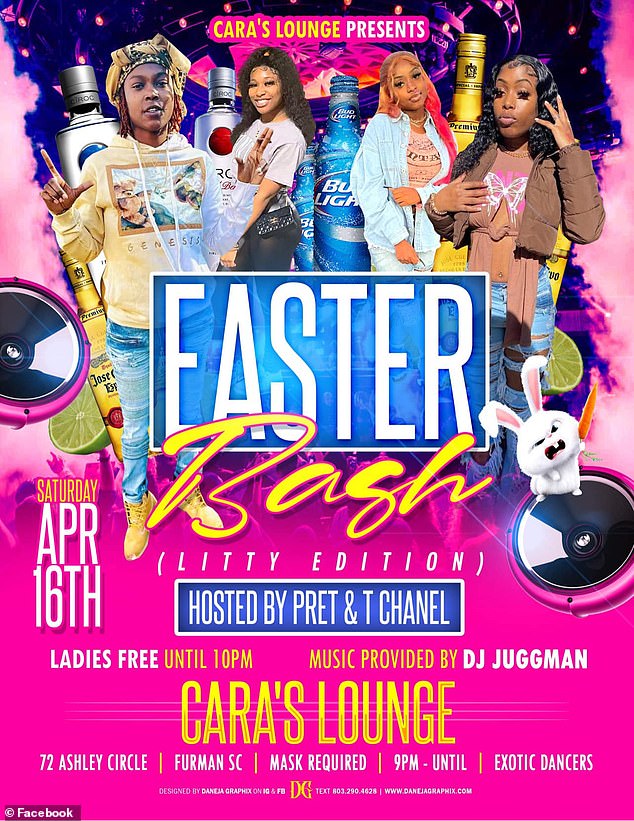 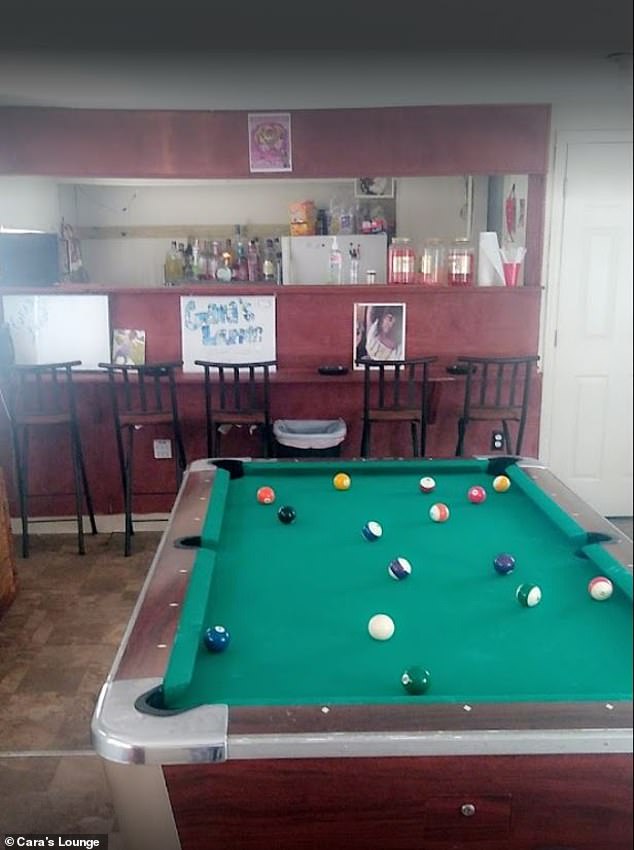 There are no reported fatalities from the early Sunday morning shooting at the venue (above). Information about suspects or motives has not been released by state law enforcement 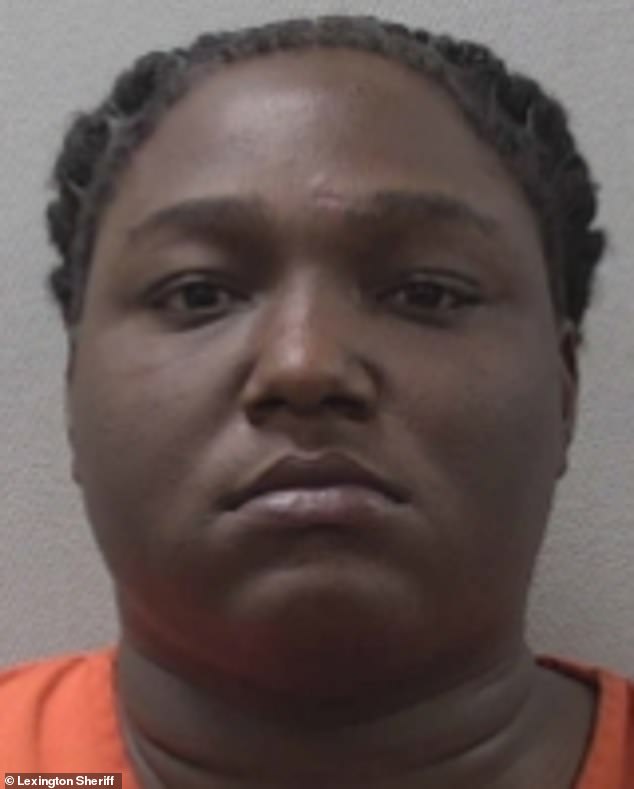 Jewayne M. Price, 22, was arrested early Sunday in connection to the South Carolina mall shooting that left 14 injured in Columbia, 98 mi from Furman. He is expected to be charged with unlawful carrying of a pistol 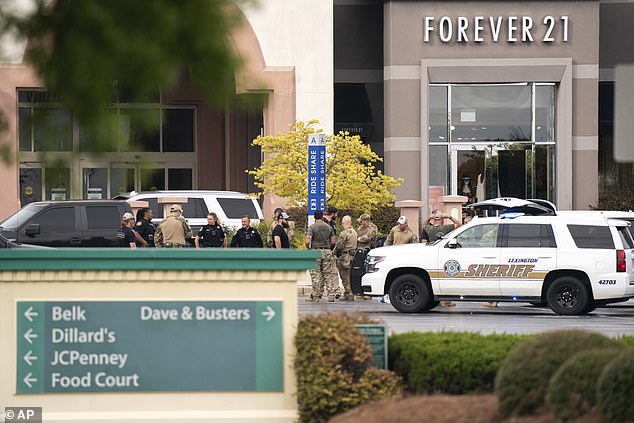 No fatalities have been reported in Saturday’s mall shooting, but nine people were shot and five people suffered injuries while attempting to flee Columbiana Centre for safety

There have been no reported fatalities in Sunday’s shooting in Furman, which has a population of 224 people. The closest city is Savannah, Georgia, about 46 mi away.

A flier for the event promoted the ‘litty’ bash, which required masks, as a party with exotic dancers and a DJ. It said the party started at 9pm but did not specify an end time.

It’s the second mass shooting in South Carolina in 24 hours.

No fatalities have been reported in the Saturday shooting at the Columbia mall.

Nine people were shot and five people suffered broken bones, lacerations and head injuries while attempting to flee the mall for safety.

Police said the 73-year-old victim continues to receive medical treatment, but the other victims have been released from local hospitals or will be released shortly.

Officials are still looking for two other suspects believed to be connected to the shooting.

Preliminary examination of ballistic evidence collected from the scene indicates that at least two different firearms were used by two suspects. At least one firearm was seized.

Police believe the shooting was an isolated incident between the suspects and likely stemmed from an on-going conflict.

‘We don’t believe this was random,’ Columbia Police Chief W.H. ‘Skip’ Holbrook said during a press conference Saturday. ‘We believe they knew each other and something led to the gunfire.’

Inmate records indicate Price has not yet been formally charged in the shooting, however he remains in custody at the Lexington County Detention Center.

His initial court date has not yet been set, nor has bond. 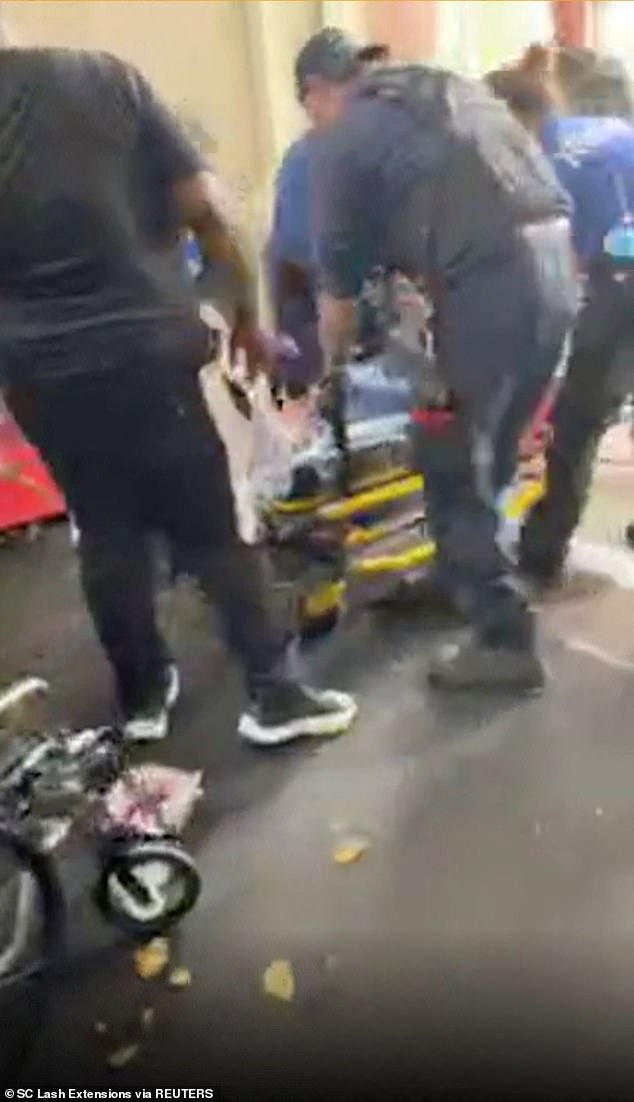 A person is carried away in a gurney in the aftermath of a shooting that took place at a shopping mall in Columbia, South Carolina on Saturday

Heavy police presence continued in the area hours after the shooting, though officers began letting more traffic through the streets surrounding the shopping centers and strip malls that are usually packed on weekends.

Officers were also stationed outside a nearby hotel designated as a reunification area for people at the scene of the shooting and their families.

Workers from a couple of stores remained clustered in the mostly empty parking lot Saturday evening, waiting for police to let them back inside to retrieve their car keys and personal belongings so they could leave.

They said they did not hear or see anything during the shooting but followed the mall’s alert system and were evacuated by police shortly after. They declined to give their names, citing company policies.

‘Today’s isolated, senseless act of violence is extremely upsetting and our thoughts are with everyone impacted,’ Columbiana Centre said in a statement. ‘We are grateful for the quick response and continued support of our security team and our partners in law enforcement.’ 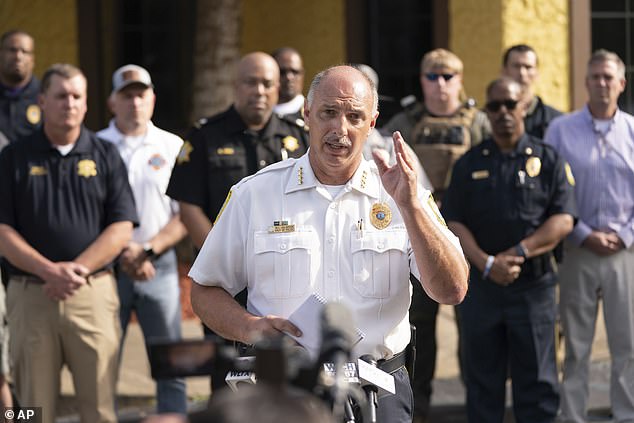 Columbia Police Chief W.H. ‘Skip’ Holbrook said officials ‘don’t believe this was random’ and alleged the suspects knew each other 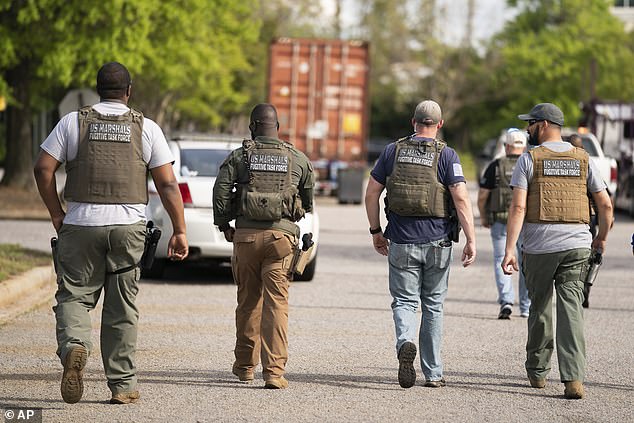 Members of the U.S. Marshals fugitive task force are seen on Saturday afternoon outside the Columbiana Centre mall in Columbia, South Carolina 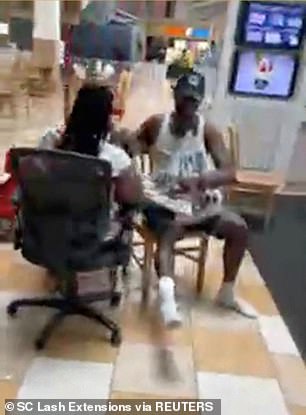 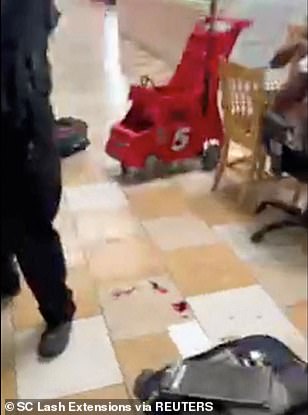 People could be seen sitting in the mall in the aftermath of the shooting (left), and blood was left on the floor (right)

Shopper Daniel Johnson said he and his family were visiting from Alabama and were eating in the food court when they first heard shots ring out and started seeing people running.

Johnson said people were screaming for their children and spouses, knocking over tables in the food court as they fled.

‘Everybody was trying to get outside,’ Johnson said. ‘When I was coming out, you could see baby strollers turned over, people’s phones and left keys. It was kind of a hectic situation.’

Johnson said he gathered his wife, daughter and son and began heading toward the exit after letting the crowd clear out for a bit.

‘My biggest thing was – and not to sound selfish – was to make sure that our family was OK and to get them out safely because this is not something that we love to do for Easter weekend.’ 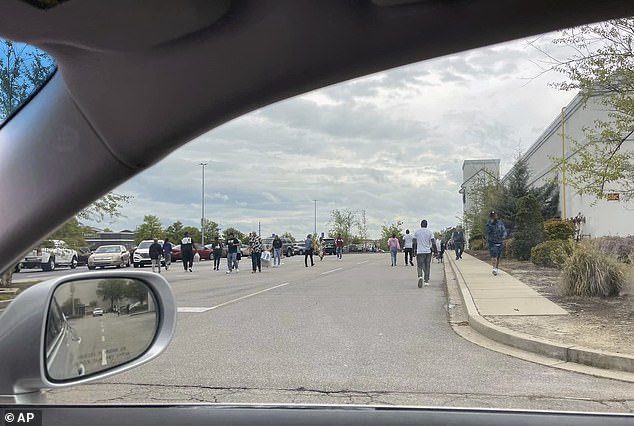 People are seen evacuating the mall in Columbia on Saturday afternoon 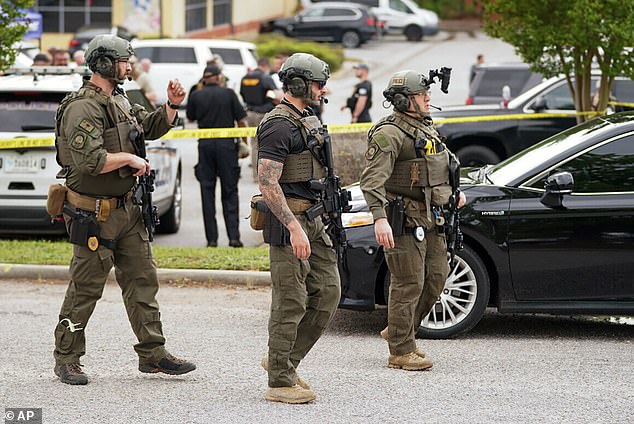 The shooting is the latest in a rash of shootings at or near malls across the country.

A 15-year-old boy was shot in the head Wednesday outside Brooklyn’s Atlantic Terminal Mall. His injuries were not believed to be life-threatening. Officials said he was with a group of boys when they got into a dispute with a second group.

On Tuesday, a Southern California shoe store owner mistakenly shot a 9-year-old girl while firing at two shoplifters at the Mall of Victor Valley, police said.

And earlier this month, police said six people were killed and 12 others wounded in Sacramento, California, during a gunfight between rival gangs as bars closed in a busy area near the Downtown Commons shopping mall and the state Capitol.

On Sunday morning, two teenage boys were killed during a shooting at a house party at an Airbnb in Pittsburgh.

A horrific video shows the moment hundreds of partygoers fled the scene of an Airbnb early Sunday morning as shots were fired.

The video, posted online by KDKA editor Ed Thompson, shows the underage partiers in an argument before one man yells, ‘He’s got a gun, he’s got a gun get the f*** down.’

He could be heard urging others to flee the scene as he, too, runs down the stairs of an apartment at the intersection of Suismon Street and Madison Avenue in Pittsburgh’s North Side at around 12.30am, stumbling over others, as the unknown gunman started shooting. 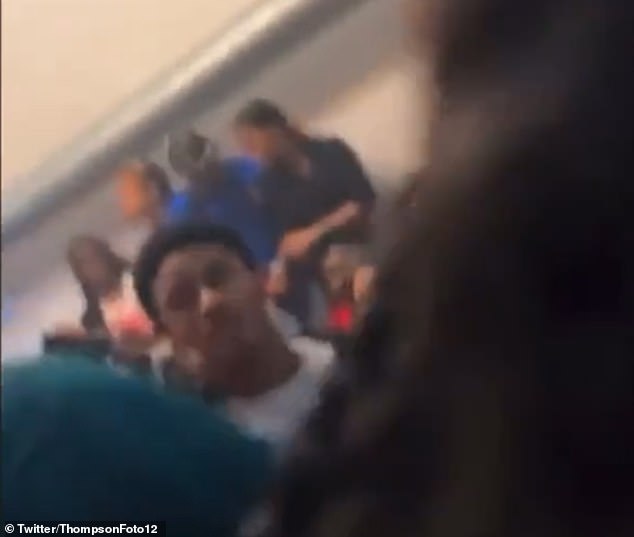 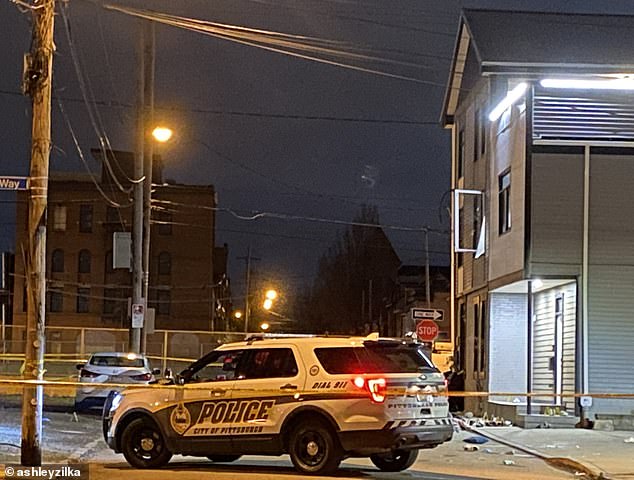 The shooting occurred at around 12.30am at an Airbnb at the intersection of Sussman Street and Madison Avenue in Pittsburgh’s Deutschtown neighborhood (pictured)

Police say there were more than 200 people inside the Airbnb at the time, many of whom were underage, when multiple gunmen opened fire, killing two teenage boys and injuring eight others. Three are now in critical condition.

As many as 50 shots were fired inside the apartment, authorities say, prompting some attendees to jump out the windows. At least two of those partygoers sustained broken bones and lacerations from the jump, according to WTAE.

But officials said at a news conference Sunday afternoon they now believe there were a total of 90 shots fired in what Police Chief Scott Schubert described as a ‘very chaotic scene.’