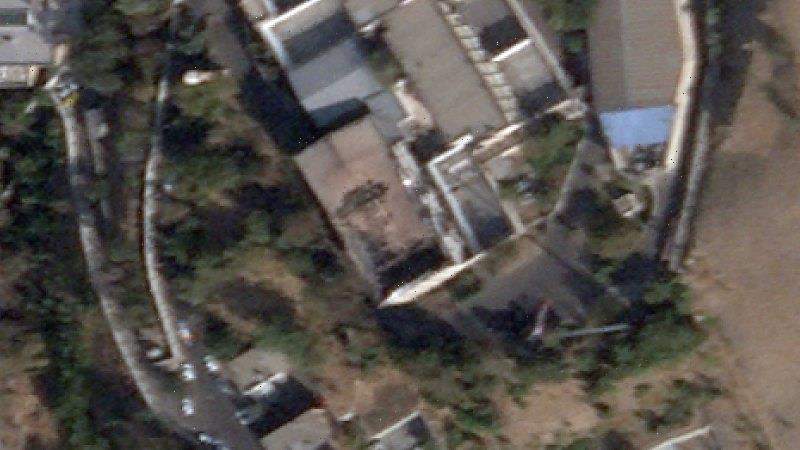 Dubai: A weekend fire at Iran’s notorious Evin Prison damaged one of the largest buildings in the complex, according to satellite photos analysed on Monday. Authorities raised to eight the number of inmates killed, doubling the initial toll.

What happened on Saturday night at the prison — for decades the main holding facility for political detainees and a centrepiece of the state’s systematic crushing of dissent — remains unclear. Online videos purport to show chaotic scenes with a prison siren wailing as flames rise from the complex, the apparent crackle of gunfire and people screaming: “Death to the dictator!” 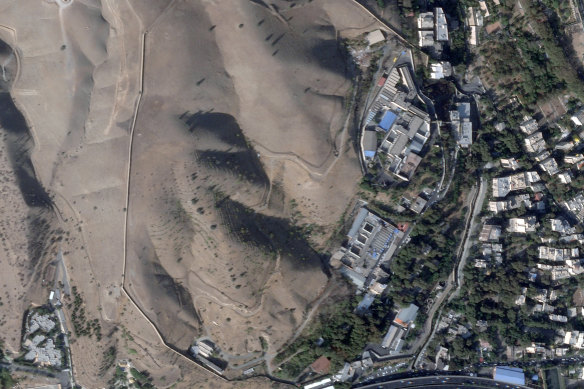 This satellite photo from Planet Labs PBC shows Evin prison in Tehran, Iran, on Sunday, October 16, after a fire at the complex.Credit:AP

The fire erupted as nationwide anti-government protests triggered by the death of a young woman in the custody of the country’s morality police entered a fifth week. Tensions have escalated to a point unseen since the mass demonstrations that accompanied the country’s 2009 Green Movement protests.

The fire at one of Tehran’s most heavily guarded facilities potentially raises the stakes for those continuing to rally against the government and the mandatory headscarf, or hijab, for women after the September 16 death of Mahsa Amini.

Satellite photos taken Sunday by Planet Labs PBC and analysed by The Associated Press show the roof burning away from a large building that’s part of the northern section of Evin Prison. The prison also houses prisoners convicted of criminal charges.

The Iran Prison Atlas, a project by the California-based rights group United for Iran, which collects data on Iranian prisons and prisoners, had previously identified the structure’s wards as housing prisoners convicted on fraud and theft cases — not those held on political charges. However, the Iran Prison Atlas has said that wards have changed over the years. 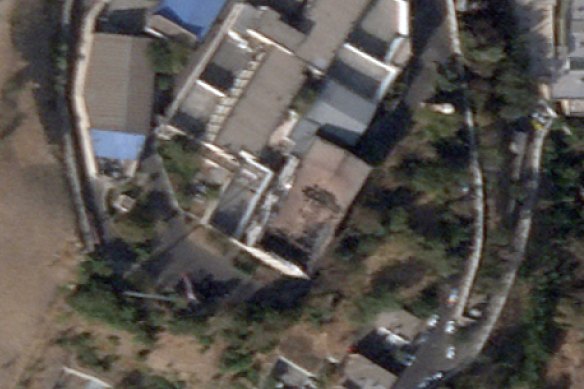 Evin prison in Tehran, Iran after the fire.Credit:AP

He also said political prisoners in Ward 4 of the prison inhaled tear gas during the incident. The semiofficial Tasnim news agency also said Evin’s Wards 6 and 7 sustained damage as well. Iranian state television rushed a camera crew to the site early Sunday morning, filming a reporter walking through one ward with prisoners asleep in bunks as firefighters doused the embers of the blaze.

The TV described the fire as having taken place at a sewing workshop, something Iran’s judiciary chief Gholamhossein Mohseni Ejehi repeated on Monday. He blamed the incident on “the enemy’s agents.” Iran has been portraying all unrest in the country as stirred up by the United States, Israel and other nations it views as enemies.

Earlier Monday, Iran’s judiciary raised the death toll from the blaze to eight, after initially reporting four deaths over the weekend.

Authorities have blamed “rioters” for setting the blaze, though they haven’t described what measures they took against the prisoners on site. Video of the fire purports to show people on the roof of the building, tossing liquid on the flames at first. Apparent gunfire echoes through other videos, including what appears to be some sort of ordinance being lobbed into the prison complex, followed by the sound of an explosion.

As the fire grew larger, one video includes voices shouting: “Death to the dictator!” That cry against Iran’s Supreme Leader Ayatollah Ali Khamenei has become common at night in Tehran amid the protests, even though it carries the risk of a death sentence in a closed-door Revolutionary Court.

Evin Prison, in northern Tehran abutting the foothills of the Alborz Mountains, first opened under Iran’s Shah Mohammad Reza Pahlavi in 1972. Iran’s theocracy took over the facility after the 1979 Islamic Revolution. Iran’s paramilitary Revolutionary Guard, which answers only to Khamenei, operates its own prison cells at the complex, as does Iran’s Intelligence Ministry, which reports to the country’s presidency.

The Guard typically holds dual nationals and those with ties to the West there — prisoners often used in swaps with the West. Jason Rezaian, a Washington Post journalist detained by Iran on flimsy spying allegations for 544 days was held there before being freed as Tehran’s nuclear deal with world powers took effect.

“Evin is no ordinary prison,” Rezaian wrote on Twitter, sharing videos of the fire this weekend. “Many of Iran’s best & brightest have spent long stretches confined there, where brave women & men are denied their basic rights for speaking truth to power.”

Australian Kylie Moore-Gilbert was also held in Evin prison. “It looks completely horrific,” said Moore-Gilbert, who was released from Evin in November 2020.

Deputy State Department spokesman Vedant Patel, speaking to reporters in Washington on Monday, said three US-Iranian citizens it knows are detained at Evin Prison are safe. He did not say where that information came from.

“The wrongfully detained US citizens are accounted for and they are safe,” he said, adding that they remain in detention and their safety is relative considering the conditions of their imprisonment.

Iran carries out executions, as well as punishments such as amputations, prescribed under Islamic laws and ordered by the country’s hard-line court system, at Evin. Human rights activists have long documented abuses at the site. Last year, an online account purportedly by an entity describing itself as a group of hackers, leaked a series of videos to the AP showing fighting and grim conditions at the prison.

The wider protests now rocking Iran erupted after public outrage over the death of 22-year-old Amini in police custody. She was arrested by Iran’s morality police in Tehran for violating the Islamic Republic’s strict dress code. Iran’s government insists Amini was not mistreated in police custody, but her family says her body showed bruises and other signs of beating after she was detained.

So far, human rights groups estimate that over 200 people have been killed in the protests and the violent security force crackdown that followed. Iran has not offered a death toll in weeks. Demonstrations have been seen in over 100 cities, according to the group Human Rights Activists in Iran. Thousands are believed to have been arrested.

Meanwhile, the European Union on Monday slapped sanctions on 11 Iranian officials and four Iranian entities over their suspected role in the crackdown against the protests, imposing travel bans and freezing assets.