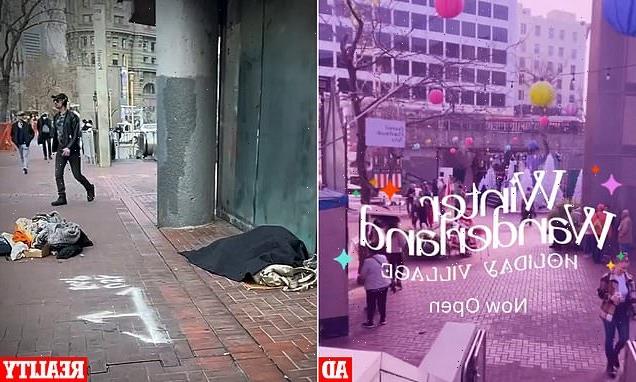 San Francisco’s taxpayer-funded open air Christmas market, hoped to be a wholesome holiday outing for families, is in fact a dystopian hellhole besieged by the city’s famed drug addicts.

At least that’s what concerned residents living near the market have revealed to DailyMail.com, with one property owner filming and posting to social media what she’s described to be a ‘horrible decline’ in the area.

Her clip shows a homeless person under a blanket just a few yards away from the Winter Wanderland market in the sunken Hallidie Plaza, near City Hall.

The camera then pans down to the market itself, where two people dressed as cuddly characters perform on a small stage. Our camerawoman then zooms off to the left, and films a man swigging from what appears to be a bottle of brown liquor.

The ‘Winter Wanderland’ has been set up at Union Square in downtown San Francisco, just minutes from the now closed Tenderloin Linkage Center. It was set up to help addicts get clean, but DailyMail.com soon revealed widespread illegal drug use had been taking place.

The footage filmed by the concerned mother of two is in stark contrast to promotional material posted by the organizers of the holiday market on social media channels, who described the event as ‘family friendly.’ 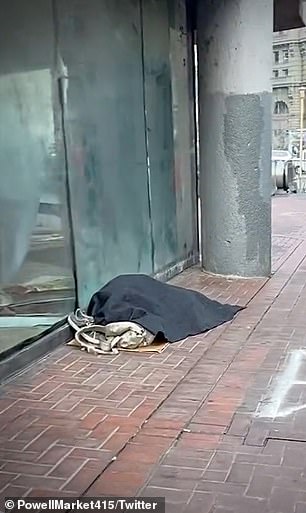 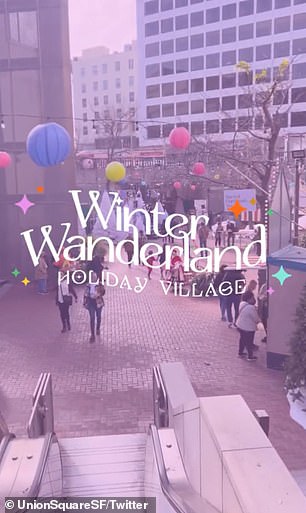 San Francisco’s taxpayer-funded open air Christmas market, hoped to be a wholesome holiday outing for families, is in fact a dystopian hellhole besieged by the city’s famed drug addicts. The reality is pictured left, while a scene from an advert promoting it is pictured right

In the footage filmed by the concerned mother, viewers can see a person sleeping next to what appears to be a pile of clothes, with used syringes scattered among the belongings.

The video then speeds up to show their proximity to the Hallidie Plaza and Powell BART station ‘Winter Wanderland Holiday Village.’

The 25 second video finishes on a near-to-empty plaza with two people dressed up dancing on a stage – one wearing a snowman costume, the other a reindeer.

In a caption the woman, who asked to remain nameless, writes: ‘Misery, drug abuse, overdosing, drug dealing and mayor’s ‘Winter Wanderland’ at Hallidie Plaza and Powell BART station at downtown San Francisco. Who is this charade for?’

Promotional footage uploaded to social media by the organizers of the ‘Winter Wanderland Holiday Village’ however tells a different, more polished, version of events.

The video starts with a performer juggling, soundtracked by Christmas carols before panning to a group of children eagerly watching on. 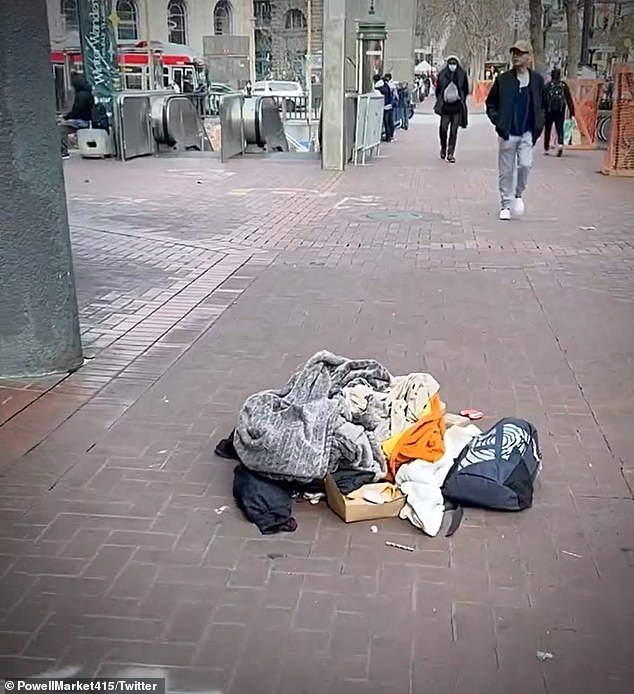 In the footage filmed by the concerned mother, viewers can see a person sleeping next to what appears to be a pile of clothes, with injections scattered among the belongings 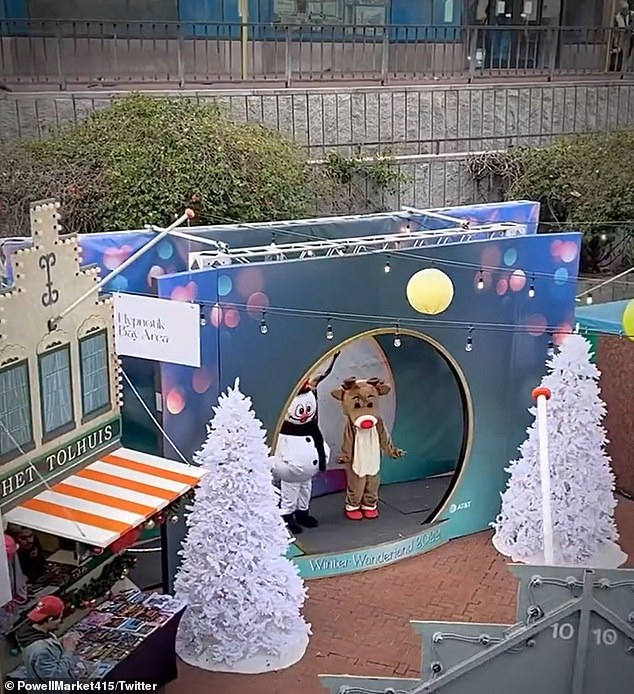 The 25 second video finishes on a near-to-empty plaza with two people dressed up dancing on a stage – one wearing a snowman costume, the other a reindeer 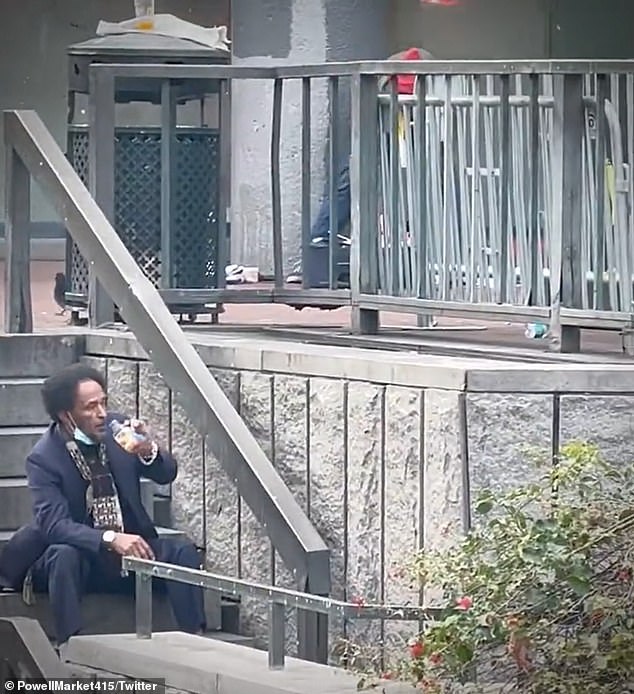 The camera zooms across to a man sitting on the steps watching the show, who appears to be swigging from a bottle of brown liquor 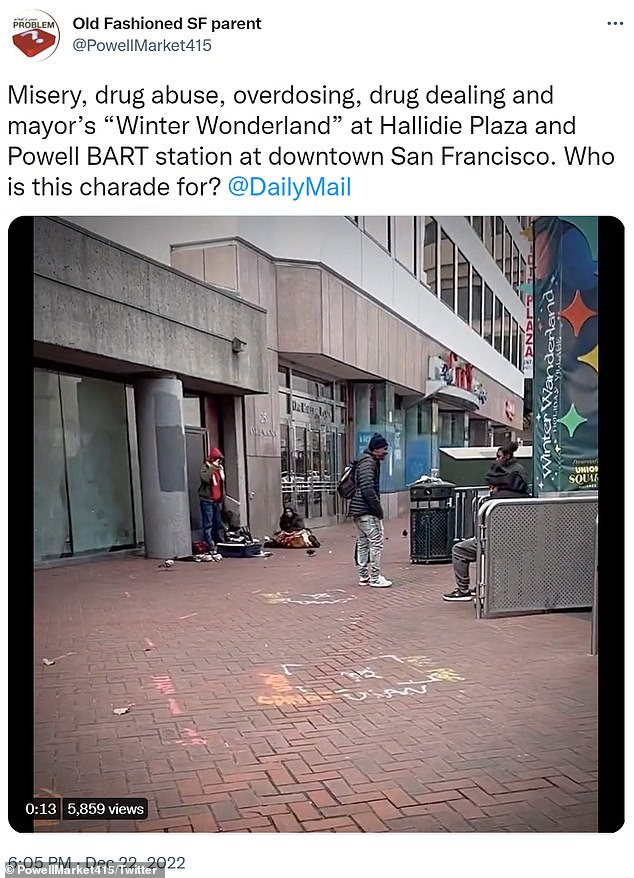 The advertisement then cuts to a woman dressed as the beloved Children’s character ‘Minnie Mouse’ while wearing a COVID-safe face mask, with the caption ‘balloon twisting fun and face painting’ at the bottom of the screen.

The woman is seen politely waving to viewers and saying ‘hi, there’ before the video ends on festive Christmas tree display.

While preparing Christmas Eve dinner for her family, the mother of seven-year-old twins told DailyMail.com of the ‘nightmare’ her once beloved city has turned into.

‘I am a property owner just above that Powell BART station,’ she said.

The San Francisco resident said she had a love/hate relationship with the city but was being forced to move due to the declining situation.

‘We just made offer on a house in Alameda, we can’t take this anymore,’ she said.

‘I have a love/hate relationship with the city. I don’t want to move but I have no choice.’ 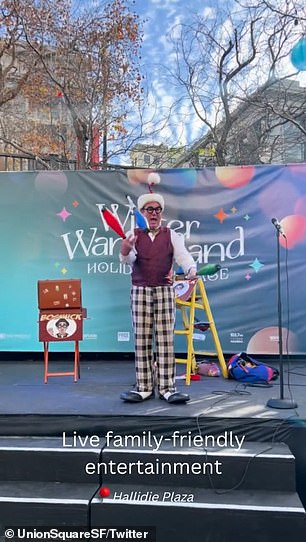 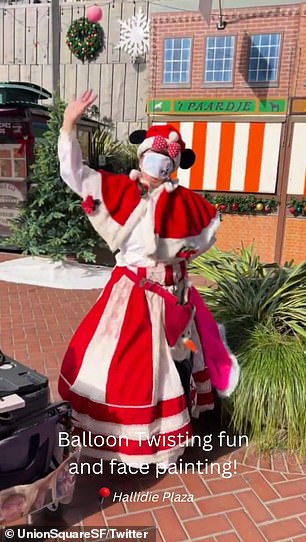 Promotional footage uploaded to social media by the organizers of the ‘Winter Wanderland Holiday Village’ however tells a different, more polished, version of events 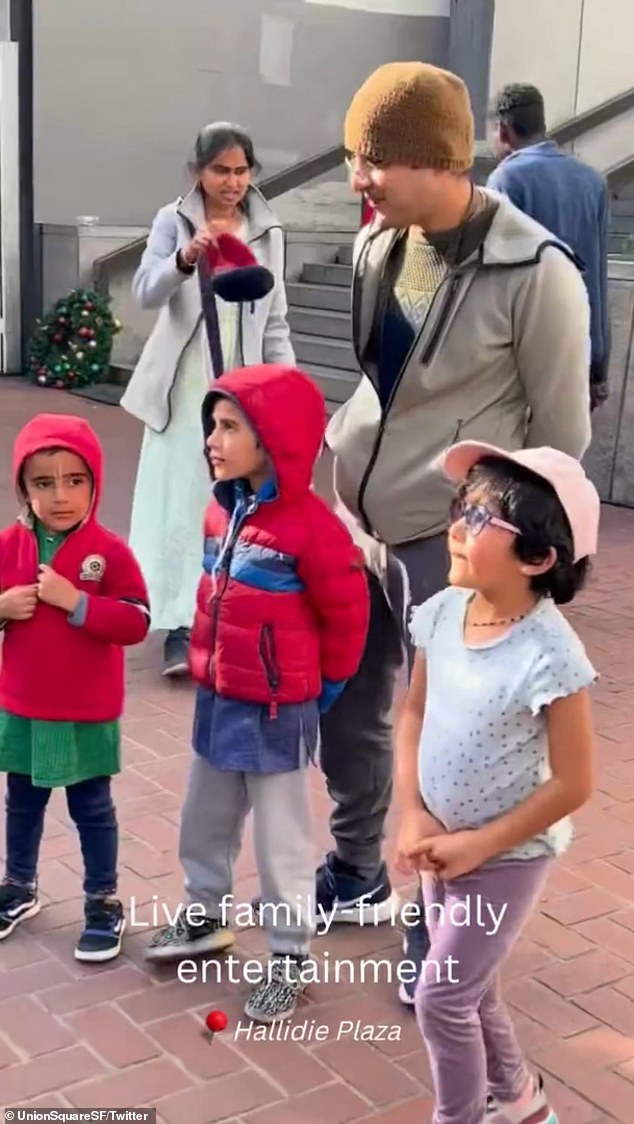 The video which starts with a performer juggling, soundtracked by Christmas carols, then  pans to a group of children eagerly watching on

The Union Square Alliance, through a $500,000 grant from the Office of Economic and Workforce Development, installed Christmas trees, wreaths, snowflakes and other hanging ornaments, along with a slew of booths for vendors at the location.

The city’s offices have the lowest occupancy of any major city, as its tech-focused workforce continues to work from home. That has shuttered many businesses and left the streets eerily empty, further allowing crime to proliferate.

Union Square’s holiday tree saw some mischief and vandalism earlier in the month but organizers weren’t worried going into the festive season.

San Francisco is governed by a leadership who appear to have set their priorities on masking the ever-present and deteriorating situation in its downtown district.

Its progressive, humanitarian self-image has been at odds with lawmaking – even when looking to solutions to save people’s lives like controlling drug sales and consumption throughout the city.

The festive market sits but a 15 min walk from the now shut Tenderloin center which was supposed to put addicts in touch with rehab facilities, but was revealed by DailyMail.com to operating as a secret illegal drug use site has since closed.

The Tenderloin Center was opened by San Francisco Mayor London Breed at the beginning of the year to tackle the city’s ongoing drug crisis and cost about $22million to operate. 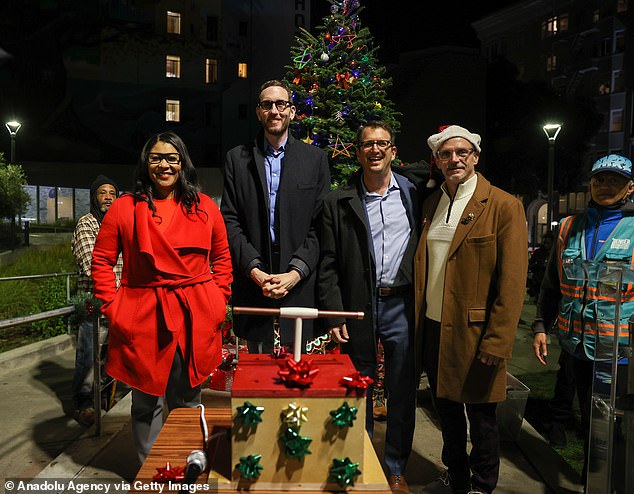 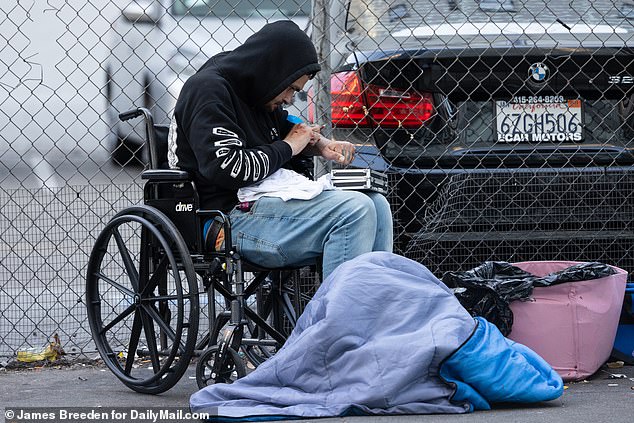 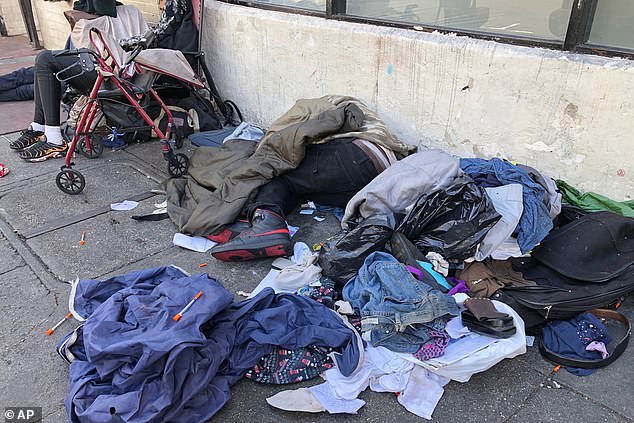 Supervised drug consumption sites remain illegal under federal law, and the health department said the Department of Justice ‘has yet to articulate a path forward’

The site was often referred to as a ‘safe place’ for addicts to ‘get high without getting robbed,’ according to one person who used the center.

In the first four months of the center’s opening, was said to only refer 18 people of the more than 23,000 it welcomed into the site.

Overall less than one per cent of visits ended in a ‘completed linkage’ to behavioral health programs.

City leaders, including Breed, now say the site was a ‘temporary solution’ offered up as a way to avoid the more than 640 overdose deaths San Francisco saw in 2021.

Despite their efforts, 2022 has been nearly just as deadly as more than 500 people have died from overdoses throughout the California city. In 2021, there were 641.

Officials had also hoped the site would offer a place to deal with the homeless crisis the city has faced in recent months and years.

Some estimates indicate that hundreds of people visited the Tenderloin Center while it was open, and more than 350 overdoses were reversed at the location.

Mayor Breed had originally allotted just $10 million for the project but it quickly ballooned to more than double that estimate.

In total, some 400 individuals were provided with assistance each day, according to the San Francisco Department of Public Health.

A large portion of those who took advantage of the site used it specifically for shelter or food.