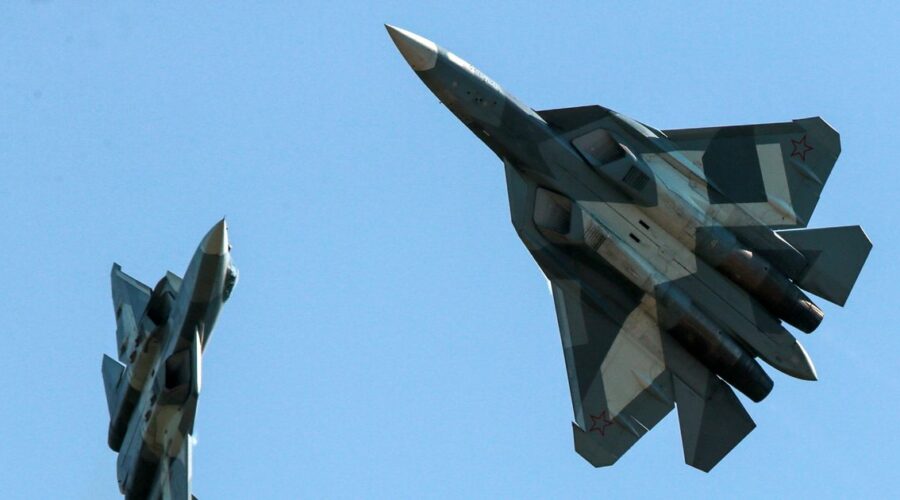 One of Russia's most lethal fighter jets has apparently been used during the invasion of Ukraine – despite rumours of it still being in development.

The Sukhoi-57 is the next generation of Russian warplane and is said to be more than a match for its US and Chinese rivals.

Each unit costs around £120 million and can fly at more than 1,600mph and altitudes of up to 12 miles, and it has been in development for more than 20 years.

It has K-77M missiles with a range of up to 125 miles – which is claimed to out-range any of its American rivals.

Sukhoi-57 jets are said to be near-invisible to enemy radars and were set for military service in 2019, but this was never confirmed.

Russia originally ordered 52 of the planes, but this has been reduced to 12 after repeated delays with project since its inception in 2010.

However, the fifth generation of the plane was spotted in Ukraine when Zhytomyr was bombed around four weeks ago.

It is claimed that the unit was tasked with bombing the Berdychiv bridge which stretches over the Teterev river.

According to several reports, local residents claimed that the aircraft had made an unusual sound and looked very similar to the fifth-generation Su-57 in terms of its design.

While it has not been confirmed by either Ukraine or Russia that the bomber was used, it does appear that footage filmed locally shows that it has been.

According to the experts from Popular Mechanics, the plane is nicknamed “Felon”.

They said: “The Su-57 is a flatter, more angular airframe than earlier jets, with a blended wing and body configuration to give it built-in stealth.

“It was initially fitted with two Saturn/Rybinsk AL-31F1 after-burning turbofan engines, each with a thrust rating of 19,842 pounds.

“In 2017, an Su-57 flew with the aircraft’s permanent engine—the brand new, higher-performance Izdeliye 30, which generates 24,250 pounds of thrust.

“The 'Felon' is designed to engage adversaries in the air and on the ground while remaining stealthy, and like the F-22 Raptor, it stores armament in four internal weapons bays, including two large main bays and two small bays.