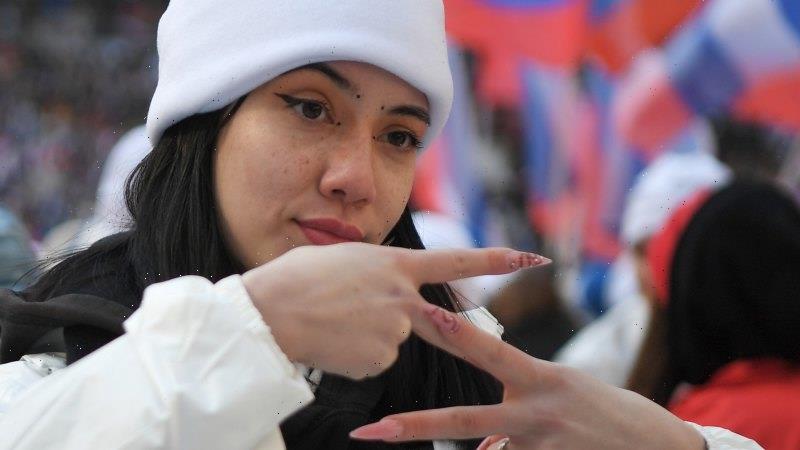 Riga, Latvia: When Irina Gen’s students in western Russia asked why a European sports competition had barred them from attending, the 55-year-old teacher let loose with a tirade against Russia’s invasion of Ukraine.

“So long as Russia doesn’t behave itself in a civilised way, this will go on forever,” she fumed, adding that she endorsed the European ban. Russia “wanted to get to Kyiv, to overthrow Zelensky and the government. This is a sovereign state,” she said. “There’s a sovereign government there.”

People walk past the letter Z, which has become a symbol of the Russian military, on an advertisement screen in St Petersburg, Russia.Credit:AP

Little did she know that her students were recording her outburst and that a copy would make its way to law enforcement authorities, who opened a criminal investigation under a new national law banning “false” information about the military.

Gen is one of at least four teachers recently turned in by students or parents for antiwar speech, in some of the starkest examples of the government’s quest to identify and punish individuals who criticise the invasion.

It’s a campaign with dark Soviet echoes, inspired last month by President Vladimir Putin, who praised Russians for their ability to identify “scum and traitors” and “spit them out like a fly”.

“I am convinced that this natural and necessary self-cleansing of society will only strengthen our country,” Putin said March 16 in a televised speech, accusing the West of wanting to use a “fifth column” to destroy Russia. 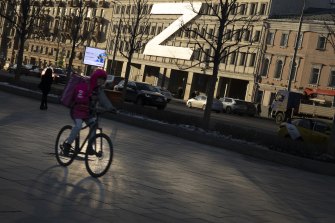 A food delivery courier rides a bicycle along a street with a huge letter Z, which has become a symbol of the Russian military, and a hashtag reading “We don’t abandon our own” on a building during sunset in Moscow, Russia.Credit:AP

In the last several weeks, a list of “traitors and enemies” has cropped up online, published by the Committee for the Protection of National Interests, a shadowy group claiming a duty to expose public figures who support “anti-Russian” sanctions and political pressure.

The regional government of Kaliningrad sent text messages to local residents urging them to report “provocateurs and scammers” who were undermining the “special operation in Ukraine,” according to the Russian newspaper Novaya Gazeta. And a string of activists, journalists and opposition politicians have found the word “traitor” and vile graffiti painted on their front doors. 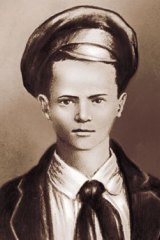 Pavlik Morozov was celebrated in the Soviet Union for dobbing in his father. Credit:Internet

“After a rather significant period of freedom … fear has returned to Russian society, and informants have become more active against those who express disagreement with the authorities,” said Nikita Petrov, a longtime historian at the human-rights group Memorial, which a Moscow court abolished in December after years of government pressure on the group.

New censorship restrictions make it easy for war opponents to run afoul of the law. Recent additions to the criminal code make it illegal to discredit the armed forces or to spread “fake” information about the military – which in practice means anything contradicting official government reports.

The cases of children informing on teachers recall the young Soviet folk hero Pavlik Morozov, who, legend had it, betrayed his father to the authorities for anti-Soviet activity. Generations of Soviet children were encouraged to be like Pavlik, to show loyalty to the state above all else.

In the weeks since the invasion began, Russian social media have been flooded with photos of schoolchildren attending special patriotic lessons or posing for pictures as they formed the letter Z – a symbol signifying support for the war.

Education Minister Sergey Kravtsov said in early March that more than 5 million children across Russia had watched a lesson called Defenders of Peace. It was part of a government-produced series reviewed by The Washington Post that promotes many of the Kremlin’s arguments and justifications for the attack on Ukraine.

Until her resignation under pressure this month, Gen taught English to eighth-grade students in the city of Penza, 400 miles (643 km) southeast of Moscow, according to Pavel Chikov, the head of an association of human rights lawyers now representing Gen. She did not respond to requests for comment.

Gen’s answer to the students’ questions about why they couldn’t compete in the sports event was “emotional,” Chikov said.

“Somebody recorded this conversation and then reported it to the police.”

The recording was passed to federal authorities, who on March 30 opened a criminal investigation under the new censorship law.

A copy of the recording spread quickly online. In it, Gen can be heard sparring with her students. One girl seems to object to the teacher’s criticism of the invasion, saying “we don’t know all the details.”

Informants have turned in a variety of war critics, including a church deacon who shared his views with parishioners and colleagues, according to a Russian media report.

A 17-year-old in the Siberian city of Novosibirsk is being investigated for a news report about the war that he shared in a chat group on the social media platform Telegram, according to his lawyer, Stanislav Seleznev. He said it was possible that law enforcement was monitoring the group or that one of the 400 participants reported his client. 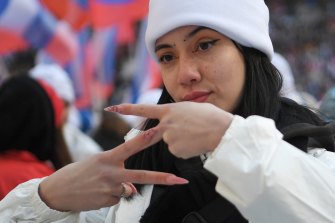 A young woman shows the letter Z, which has become a symbol of the Russian military. Credit:AP

Several other teachers have also been targeted, including a university lecturer in the Siberian region of Amur, who was fined for disseminating “false information” to her students about Russian military actions in Ukraine, according to a local court. Witnesses to the offending lecture gave testimony that helped establish the teacher’s guilt, the court added.

On Sakhalin Island, off Russia’s Pacific Coast, another teacher of English was secretly recorded by a student last month. She was fired from her job and fined 30,000 roubles, about $500, by a court that said she had discredited Russian troops.

The teacher, Marina Dubrova, told a Siberian news site affiliated with the US-funded Radio Free Europe/Radio Liberty that she had called the war a mistake during after-class discussions. The student’s tape of her comments ended up with the police – possibly through the parents, Dubrova said, though she wasn’t certain. She did not respond to The Post’s requests for comment.

“On Monday morning at school I was greeted with the words: ‘Marina Gusmanovna, the police are here for you,’” Dubrova said in the interview, using her formal name with patronymic.

“A protocol was drawn up against me, and the trial took place on the same day. I explained my position that the president of our country is just a person, like everyone else, that he can make mistakes. And I think this decision is wrong,” Dubrova continued.

“I was told that, as a teacher, I cannot say such things to students. But I don’t agree,” she said. “Teaching is a humanistic profession, first and foremost, to teach people to hear different opinions, to form positions based on different points of view. Is that really a bad thing?”