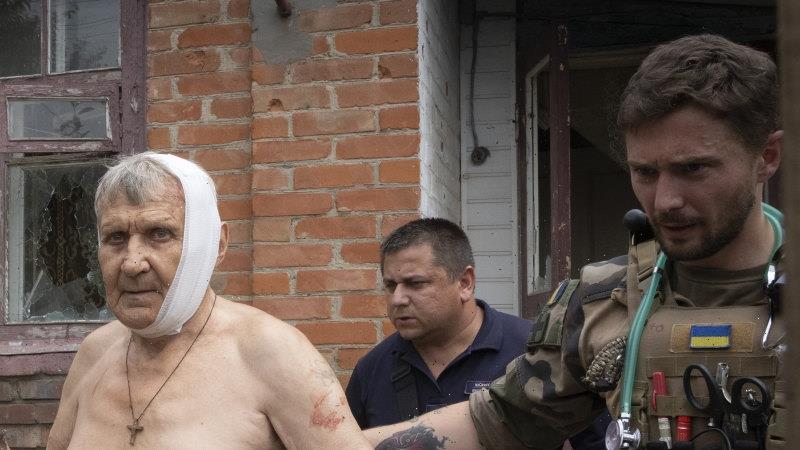 Kyiv/Konstyantynivka: At least three people were killed and dozens of homes damaged in the Russian city of Belgorod near the Ukraine border, the regional governor said on Sunday, as Kyiv acknowledged it could lose its last big bastion in eastern Ukraine to Kremlin forces.

Governor Vyacheslav Gladkov reported a number of blasts in the city of nearly 400,000 some 40 kilometres north of the border with Ukraine. 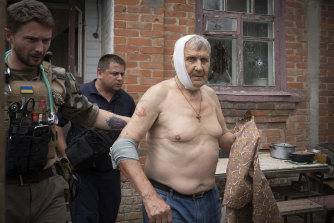 A paramedic helps a man wounded by Russian shelling to leave his house in Slovyansk, Donetsk region, Ukraine, on June 30.Credit:AP

At least 11 apartment buildings and 39 houses were damaged, including five that were destroyed, Gladkov said on the Telegram messaging app.

“The death of civilians and the destruction of civilian infrastructure in Belgorod are a direct act of aggression on the part of Ukraine and require the most severe – including a military – response,” Klishas wrote on Telegram.

Moscow has accused Kyiv of several attacks on Belgorod and other regions bordering Ukraine since Russia’s February 24 invasion. Ukraine has not claimed responsibility but has described the incidents as payback and “karma” for Russia’s invasion. 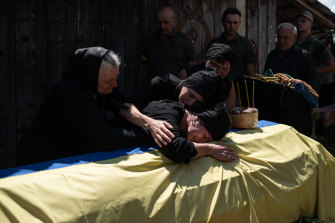 Maryna Hrynchuk, 27, wife of Oleksandr Hrynchuk cries over his coffin after his memorial service on June 27, 2022 in Bila Krynytsia, Ukraineafter he was killed on June 21 in the Luhansk region. Credit:Getty Images

There was no immediate reaction from Ukraine to the latest attack and Reuters could not independently verify the Russian accounts.

Thousands of civilians have been killed and cities levelled since Russia invaded in what Ukraine its Western allies say is an unprovoked war of aggression. Russia denies targeting civilians in what President Vladimir Putin calls a “special military operation” to demilitarise and “denazify” its neighbour.

Russia is focussed on driving Ukrainian forces out of Luhansk and Donetsk provinces in the Donbas, where Moscow-backed separatists have been fighting Kyiv since Russia’s first military intervention in Ukraine in 2014. 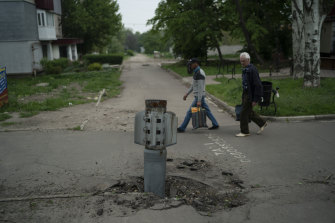 People walk past part of a rocket that sits wedged in the ground in Lysychansk, Luhansk region, in May. The region is not almost entirely under Russian control.Credit:AP

Russian forces seized Lysychansk’s sister city Sievierodonetsk, across the Siverskiy Donets river, last month after some of the heaviest fighting of the war.

Rodion Miroshnik, ambassador to Russia of the pro-Moscow self-styled Luhansk People’s Republic, told Russian television, “Lysychansk has been brought under control,” but added: “Unfortunately, it is not yet liberated.”

“Now there are fierce battles near Lysychansk, however, fortunately, the city is not surrounded and is under the control of the Ukrainian army,” Muzychuk said.

Reuters could not independently verify the battlefield reports.

Oleksiy Arestovych, adviser to Ukraine President Volodymyr Zelensky, said Russian forces had finally crossed the Siverskiy Donets river and were approaching the city from the north.

“This is indeed a threat. We shall see. I do not rule out any one of a number of outcomes here. Things will become much more clear within a day or two,” he said.

Arestovych said, however, that taking Lysychansk would complicate matters strategically for the Russians as they would have to focus on six major cities in the industrialised eastern Donbas region, spreading their forces more thinly.

He added: “The more Western weapons come to the front, the more the picture changes in favour of Ukraine.” Ukraine has repeatedly appealed for more weapons from the West, saying its forces are heavily outgunned.

Far from the eastern fighting, Russia said it had hit army command posts in Mykolaiv near the vital Black Sea port of Odesa, where the mayor on Saturday had reported powerful explosions.

Ukrainian authorities said another missile slammed into an apartment block near Odesa on Friday, killing at least 21 people. A shopping mall was hit on Monday in the central city of Kremenchuk, killing at least 19.

Zelensky denounced the strikes on Friday as “conscious, deliberately targeted Russian terror and not some sort of error or a coincidental missile strike”.

In his nightly television address on Saturday, Zelensky said it would be a “very difficult path” to victory but Ukrainians must maintain their resolve and inflict losses on the “aggressor … so that every Russian remembers that Ukraine cannot be broken”.

Troops on a break from the fighting in Konstyantynivka, a market town about 115 kilometres west of Lysychansk, said they had managed to keep the supply road to the embattled city open, for now, despite Russian bombardment.

“We still use the road because we have to, but it’s within artillery range of the Russians,” said one soldier as comrades relaxed nearby, munching on sandwiches or eating ice cream.

“The Russian tactic right now is to just shell any building we could locate ourselves at. When they’ve destroyed it, they move on to the next one,” he said.

Despite being battered in the east, Ukrainian forces have made some advances elsewhere, including forcing Russia to withdraw from Snake Island, a Black Sea outcrop southeast of Odesa that Moscow captured at the start of the war.

Russia had used Snake Island to impose a blockade on Ukraine, one of the world’s biggest grain exporters and a major producer of seed for vegetable oils. The disruptions have helped fuel a surge in global grain and food prices.