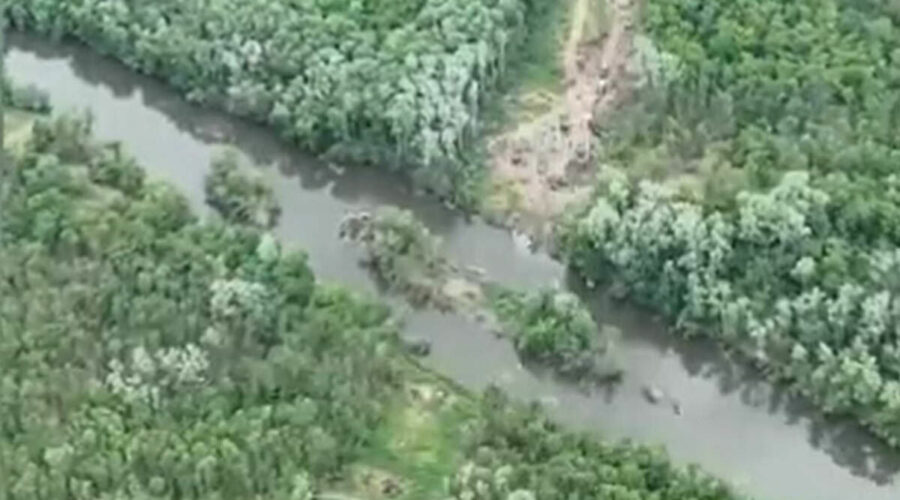 Ukrainian military have released footage of Russian troops near the village of Dronivka in the Donetsk region attempting to create a platoon bridge but failed after three weeks. Drone imagery has captured dozens of broken-down armoured vehicles. The Ukrainian army has also destroyed multiple platoon bridges in Luhansk and Donetsk.

The Defence of Ukraine said: “Artillerymen of the 17th tank brigade of the Ukrainian Army have opened the holiday season for racists.

“Some bathed in the Siverskyi Donets River, and some were burned by the May sun.”

Russia has recently claimed that it lost nearly an entire battalion while attempting to cross the Siverskyi Donets River.

It comes as Ukraine’s industrial Donbas region, the focus of recent Russian offensives, has been destroyed, President Volodymyr Zelensky said as some of the world’s richest countries pledged to bolster Kyiv with billions of dollars.

Since turning away from Ukraine’s capital, Russia is using massed artillery and armour to try to capture more territory in the Donbas, comprised of the Donetsk and Luhansk areas, which Moscow claims on behalf of separatists.

“The occupiers are trying to exert even more pressure.

It is hell there – and that is not an exaggeration,” Zelensky said in a late Thursday address.

“(There are) constant strikes on the Odesa region, on the cities of central Ukraine. The Donbas is completely destroyed,” he said.

Moscow calls its invasion a “special military operation” to rid Ukraine of fascists, an assertion Kyiv and its Western allies say is a baseless pretext for an unprovoked war.

As the invasion nears the three-month mark, the U.S. Senate overwhelmingly approved nearly $40 billion in new aid for Ukraine, by far the largest U.S. aid package to date.

The Group of Seven rich nations also agreed to provide Ukraine with $18.4 billion. Ukraine said the money would speed up victory over Russia and was just as important as “the weapons you provide”.

US Treasury Secretary Janet Yellen told reporters: “The message was, ‘We stand behind Ukraine. We’re going to pull together with the resources that they need to get through this.'” The White House is working to put advanced anti-ship missiles in the hands of Ukrainian fighters to help defeat Russia’s naval blockade, officials said.

US Secretary of State Antony Blinken accused Russia of using food as a weapon by holding “hostage” supplies for not just Ukrainians, but also millions around the world.

The war has caused global prices for grains, cooking oils, fuel, and fertiliser to soar.

In a further sign of Western action hurting the Russian economy, five foreign vice-presidents of Russia’s Rosneft have resigned because of EU sanctions forbidding European citizens or Russians living in the EU to work at the oil company, sources said.

The EU said it is looking into ways of using the frozen assets of Russian oligarchs to fund the reconstruction of Ukraine, while the United States has not ruled out possibly placing sanctions on countries that purchase Russian oil.