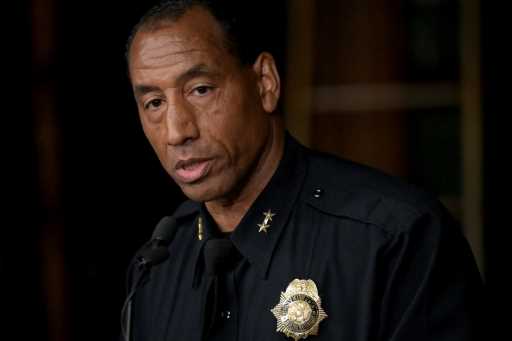 A frequent, trusted presence at community meetings and a self-described man of few words will take the helm of the Denver Police Department as it navigates a slew of problems.

Division Chief Ron Thomas this week effectively took over leadership of the department from retiring Chief Paul Pazen as the agency struggles with recruitment and retention, rising violent crime, increasing response times, and faltering public trust that Thomas said was at a “low point.”

Thomas committed to addressing the problems at a news conference Thursday introducing him as Denver’s new police chief.

“I am a man of very few words,” he said. “I do believe that actions speak louder than words.”

Mayor Michael Hancock thanked Pazen for his decades with the department and his leadership during his four-year stint as chief. Hancock said Pazen made the decision to retire and that he did not ask Pazen to step down. Pazen will be eligible for full retirement benefits on Oct. 15 and will use paid time off until then, Hancock said.

“We’ve been in the foxhole on some unprecedented times and issues, including the pandemic, the unprecedented social justice efforts and protests that occurred in our city and around the region,” Hancock said.

Hancock said Pazen, who didn’t attend Thursday’s news conference, was on a previously scheduled vacation. The mayor said he learned of Pazen’s plans to retire on Tuesday.

Pazen has not publicly spoken about his decision to step down aside from a quote in a city news release Wednesday. He did not return a call or email for comment Thursday.

Thomas said he effectively took control of the department Tuesday, though he will not officially become chief until Pazen retires Oct. 15 and he is confirmed by the City Council.

Hancock said Thomas’s priorities under his administration will be reducing crime, improving recruitment and retention, and rebuilding community relationships — especially in communities of color.

“We have 300-plus days to make this the model city in the nation on how to restore trust in the community,” said the term-limited Hancock, who will leave office next summer.

Thomas graduated from Thomas Jefferson High School and worked as a Denver police cadet before joining the police department in 1989. He then worked in nearly every division of the agency, including investigations, patrol, special operations and internal affairs.

Community leaders in Montbello said they were thrilled to hear about Thomas getting the top job. Thomas was a reliable presence at community meetings and events, they said. He may not be the loudest voice in the room, but residents and organizers knew that if you invited Ron Thomas, he’d be there.

“He has a stoic look to him, but once you start having conversations and interacting with him, he’s very open,” said Latoya Petty, director of partnerships and collaboration with the Montbello Organizing Committee.

She recalled long talks she had with Thomas about everything from police culture and the Black Lives Matter movement to gang violence and innovative approaches to getting guns off the streets.

“He’s definitely someone who’s willing to work toward a person-first approach to policing instead of a systems-first approach,” Petty said. “That’s an awesome quality that he has.”

Thomas always seemed willing to break down issues into language that ordinary citizens could understand, said Dianne Cooks, who runs Families Against Violent Acts, a Montbello nonprofit organization. If someone requested more information about robberies or other types of crimes, she said, Thomas would always follow up.

“He brought the community and the police department a lot closer when he was commander out here in Montbello,” she said.

That’s one of the reasons Hancock nominated Thomas to be chief.

“When you see community gatherings on the issue of safety… you see Chief Thomas there listening, building bridges,” Hancock said. “He’s everywhere.”

With his mayoral term coming to an end in July, Hancock said he didn’t have time to conduct a lengthy search for a new chief. Thomas’s name was the first one out of every person’s mouth when he asked his staff and advisers who should become chief, Hancock said.

Thomas needs to focus on the tasks left undone by Pazen and prepare the department for the mayoral administration change in 2023, said Lisa Calderón, a longtime city activist who worked with Thomas on a project examining racial profiling data.

Thomas never seemed motivated by internal politics, she said. That’s a good qualification for a chief — it allows them to put the politics aside and work, she said.

“He’s an even-keeled guy who is open to feedback,” Calderón said. “I’ve seen him in meetings where the community has been very frustrated and angry with DPD and he never lost his cool — he took in the feedback.”

Thomas wasn’t afraid to hold other cops accountable during his time as a lieutenant and commander in the Internal Affairs Bureau, said Nick Mitchell, who worked as the city’s independent monitor from 2012 to 2021. Thomas was willing to take criticism and use it to improve the bureau.

“When he has something to say, people stop and take notice because it’s always thoughtful and careful and factual,” Mitchell said.

Pazen’s decision to retire gives the department a chance to create new approaches to the city’s most difficult problems, like homelessness and addiction, said Al Gardner, immediate past chair of the Citizen Oversight Board.

“(Pazen) was bogged down and overwhelmed with the issues,” he said. “We need the new chief not to be stuck in the issues but have new ideas and a growth mindset.”

Thomas was not specific when asked about his plans to restore community trust and improve recruitment, but said he will make changes.

He gave a 13-word answer when asked what he wants the department to be in two years.

“I want this department to be what the people want it to be,” he said.

02/09/2022 World News Comments Off on Ron Thomas takes over Denver Police Department as it struggles with trust, crime
Markets