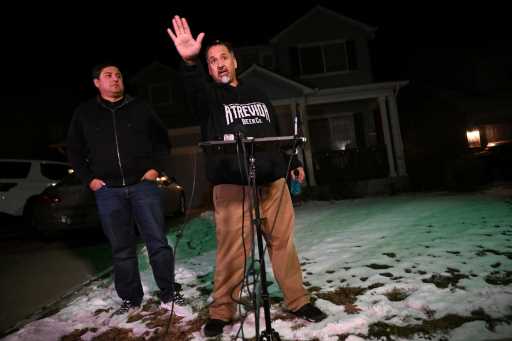 The U.S. Army veteran who stopped the active shooter at Club Q in Colorado Springs on Saturday night said he wasn’t thinking when he rushed the man, grabbed his gun and beat the shooter with it — just reacting.

Fierro was one of two people who stopped the gunman within minutes after the man entered Club Q. The first 911 calls came in at 11:57 p.m., and the shooter was subdued by the time police officers arrived. He was arrested at 12:02 a.m., police said.

Fierro was at the club with his wife and daughter to watch a drag performance. He said he first dove for cover when the gunman entered and started shooting.

“I smelled the cordite, I saw the flash, I dove, pushed my buddy down,” he said.

But when there was a lull in the shooting, he said his combat training kicked in. He ran to the shooter and grabbed the back of the body armor he was wearing, pulling the heavy-set man to the ground.

The man dropped his long gun, which Fierro described as an “AR,” and Fierro told a person nearby to move the rifle away from the shooter, which the man did. Colorado Springs police on Monday identified Fierro and Thomas James as the two club patrons who stopped the gunman.

Fierro said the shooter tried to go for his pistol after losing the long gun, but Fierro took the handgun from the man and beat him with it. James kicked the shooter in the head while Fierro beat the man.

He shouted for people to call 911. He cussed at the shooter and told the shooter he was going to kill him. When a drag performer ran by, he told her to kick the shooter, too.

“She took her high heel and she stuffed it in his face,” Fierro said.

Fierro’s daughter was injured in the mass shooting, and his daughter’s boyfriend, Raymond Green Vance, 22, was killed. His daughter, who said online that she broke her knee, watched her father speak to the media from a wheelchair on the family’s porch Monday evening.

“Raymond was a beautiful man,” Fierro said. “I loved him.”

He was brokenhearted that he could not have done more to save the people who were killed, he said.

“That guy is still alive and my family is not,” he said, adding that he considers everyone in the club that night to be his family. “I tried. I tried to finish him.”

Fierro said he was handcuffed and put in a police car for an hour after officers arrived at the shooting, adding that he did not fault them for doing so. He served in the U.S. Army for 15 years, he said, with three tours in Iraq and one in Afghanistan, leaving with the rank of major.

Fierro and his wife own the Atrevida Beer Co., a brewery in Colorado Springs.

Authorities on Monday heralded Fierro and James as heroes and said the death toll would have been much higher without their actions. Colorado Springs Mayor John Suthers said he spoke with Fierro on Monday afternoon and was struck by his humility.

“I have never encountered a person who had engaged in such heroic actions that was so humble about it,” Suthers said. “He simply said to me, ‘I was simply trying to protect my family.’”