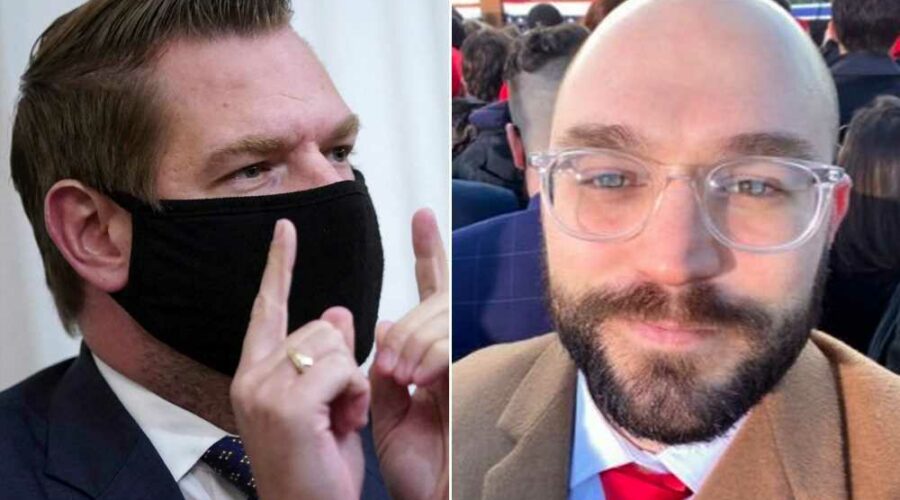 Rep. Eric Swalwell on Friday gave an ironic spit-spewing defense of wearing masks to protect against COVID-19, shouting into the face of a congressional staffer, “You don’t tell me what to f—ng do!”

The China spy-linked California Democrat later admitted to his actions on social media, saying he didn’t like to be “bullied” on face-masking — one day after the CDC said all vaccinated people can scrap their masks when indoors.

Although Democrats often accused Republicans of “not following science” on COVID-19 the past year, conservatives have flipped the script as many Democrats hesitate to accept the CDC’s guidance on putting away masks if you’ve been fully vaccinated.

Swalwell gave his non-socially distanced defense of mask-wearing when Nick Dyer, a spokesman for Rep. Marjorie Taylor Greene (R-Ga.) said to him, “Biden says you can take off your mask.”

The Democrat marched over to Dyer and shouted at him, “You don’t tell me what to f—ing do!” according to an account that Dyer gave to reporter Scott Wong of The Hill, who watched the confrontation but could not hear Swalwell’s words.

Swalwell confirmed the synopsis tweeted by Wong. The congressman added that he wished he was even “more explicit.”

“I had a mask on as I stepped off the Floor. An aide with @mtgreenee yelled at me to take my mask off. No one should be bullied for wearing a mask. So I told the bully what I thought of his order. Predictably, he went speechless. I regret I wasn’t more explicit,” Swalwell tweeted.

“You got Eric Swalwell, who had sex with a Chinese spy, on the Intel Committee,” she said, referring to Swalwell’s alleged relationship with suspected Chinese spy Fang Fang, which he has not denied.

“They don’t care to remove him off the Intel Committee, and then Swalwell wants to assault my staff … they’re out of control.”

House Speaker Nancy Pelosi (D-Calif.) has kept in place a pandemic rule requiring face masks on the House floor, saying that some Republicans aren’t vaccinated. But in adjacent hallways, there’s a noticeable partisan chasm — just as there was early in the pandemic, when Republicans were more reluctant to don masks.

.The White House immediately made masks voluntary indoors after the CDC pivot on Thursday. Most reporters and politicians in Washington are vaccinated. Nationally, 59 percent of US adults have had at least one vaccine shot and almost 46 percent are fully vaccinated, according to CDC data.

“If you’ve been vaccinated, you don’t have to wear your mask and you can shake hands. You can even give each other a hug. But if you’ve not been vaccinated, please wear a mask,” Biden said.