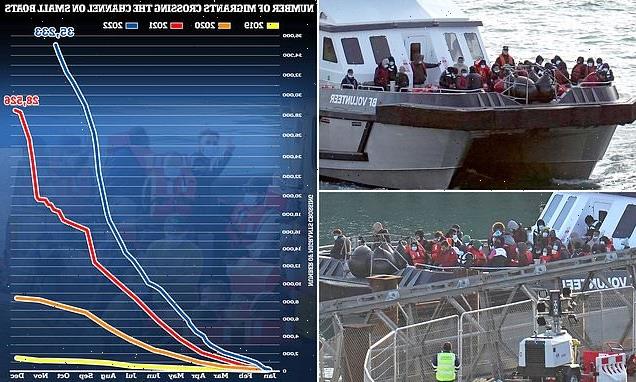 More than 35,000 migrants have reached the UK by boat so far this year – with 2,232 Channel crossings recorded in October alone

According to stats from the Ministry of Defence (MoD), 35,233 people have made the perilous journey across the 21-mile Dover Straits in 873 boats – an average of 40 people per vessel – so far in 2022.

Last year saw 28,526 asylum seekers reach British soil in inflatable dinghies and other small craft, while in 2020 just 8,410 made the crossing.

Meanwhile, analysis of the number of people illegally arriving to the UK this month shows there have been 2,232 crossings recorded – with 539 migrants being escorted into Dover, Kent, by Border Force officials on Monday, and a further 1,065 arriving the day before.

Natalie Elphicke, Tory MP for Dover, was worried about the number of people making the dangerous journey across the Channel.

She said: ‘With these shocking record numbers of illegal crossings, getting the small boats crisis under control should be a key priority. 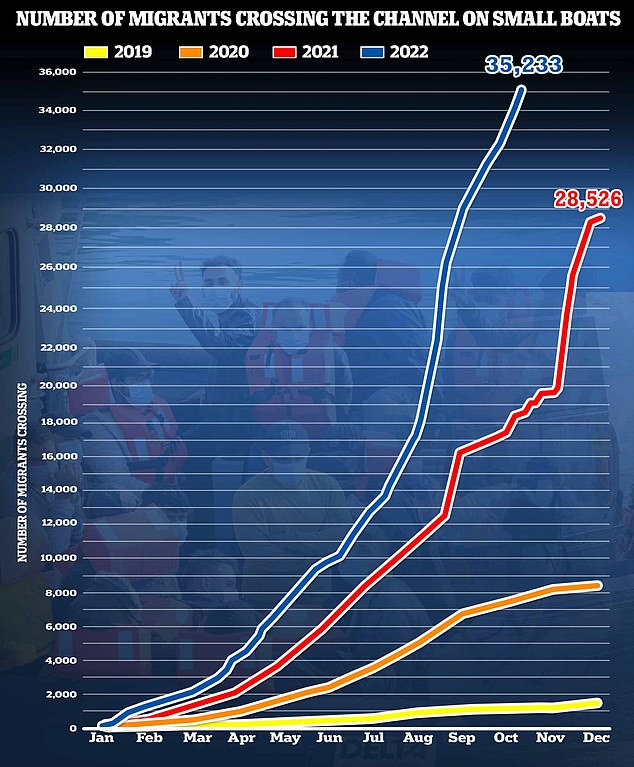 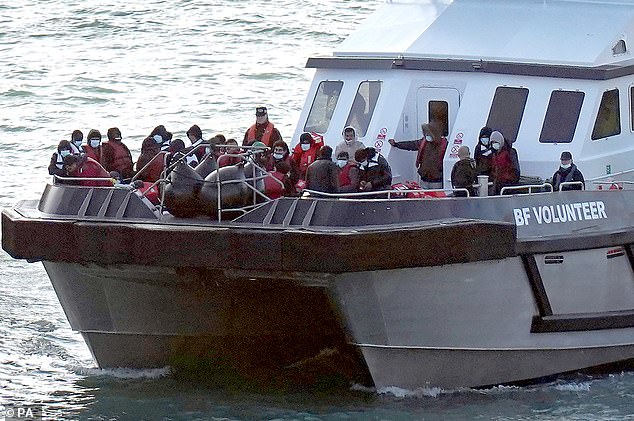 539 migrants being escorted into Dover, Kent, by Border Force officials on Monday, and a further 1,065 arriving the day before. Pictured are migrants arriving in Dover on Sunday 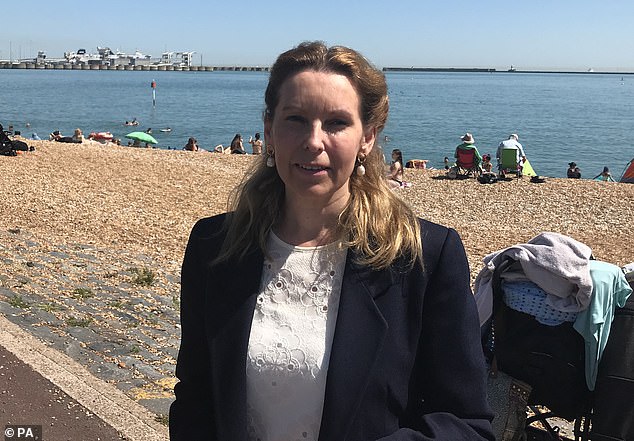 Conservative MP for Dover, Natalie Elphicke said: ‘With these shocking record numbers of illegal crossings, getting the small boats crisis under control should be a key priority’

‘With the approach of winter, the seas will get rougher and the weather colder- inevitably the risk of further loss of life will increase. That’s why urgent action is needed to stop these dangerous crossings.’

The latest milestone comes as the Government faces another legal challenge to its plan to send migrants to Rwanda.

Charity Asylum Aid’s case is due to be heard by High Court judges later this week after similar challenges were made last month.

Deportation flights are on hold while the legal disputes continue. The court is expected to give its ruling on all of the cases at the same time, at a later date.

Since former Home Secretary Priti Patel announced the deal with the east African nation in April, 29,965 people have arrived in the UK after making the journey from France.

Despite this, the number of people arriving here in small boats is still a fraction of those going to mainland Europe.

Data from the UN’s refugee agency shows at least 120,441 people arrived in Europe via the Mediterranean by land and sea last year.

Last week, Home Secretary Suella Braverman revealed it was her ‘dream’ to have the first batch of failed migrants on a plane to Rwanda by Christmas.

The senior Cabinet minister announced plans for a new blanket ban on Channel migrants and anyone else entering the UK illegally from claiming asylum.

During the Conservative Party Conference earlier this month, she also told an audience in Birmingham that her ultimate goal was to reduce net migration to ‘tens of thousands’. 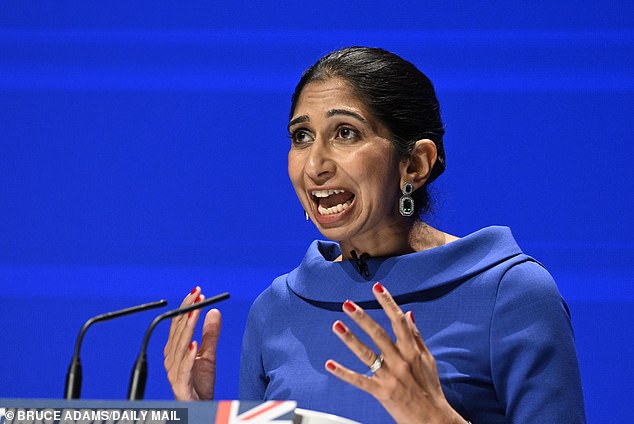 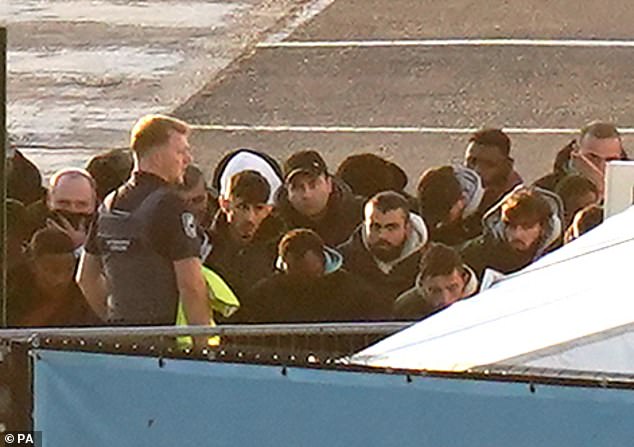 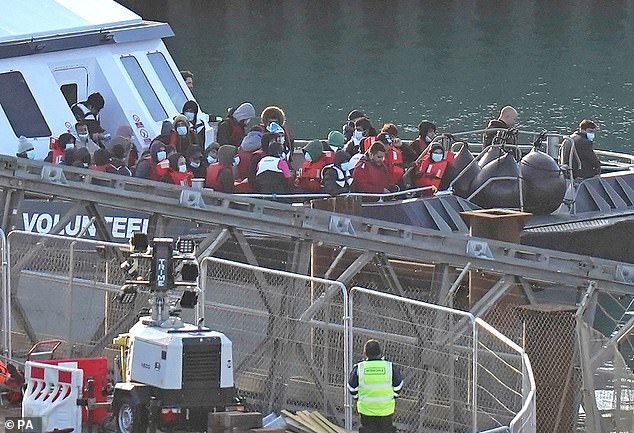 The latest milestone comes as the Government faces another legal challenge to its plan to send migrants to Rwanda. Images show asylum seekers docking at Dover on Sunday

This was a goal of the David Cameron government, but one it completely failed to score.

However she said that both measures would take time to implement due to the legal hurdles they face.

Speaking to the Choppers Politics podcast the Home Secretary said: ‘In the 90s it was in the tens of thousands under Mrs Thatcher, net migration, and David Cameron famously said tens of thousands, no ifs no buts.

‘I’m not going to commit to a number. I think we have got to definitely substantially reduce the number of students, the number of work visas and in particular the number of dependents on those sorts of visas.’

In the latest migrant arrival to Britain, some 50 people were brought into Dover’s harbour on an RNLI lifeboat at 6.30am on Monday.

They could be seen being led along the gangway to be taken for processing. Many of them sported blankets around their shoulders after battling wet and windy conditions in the Channel. 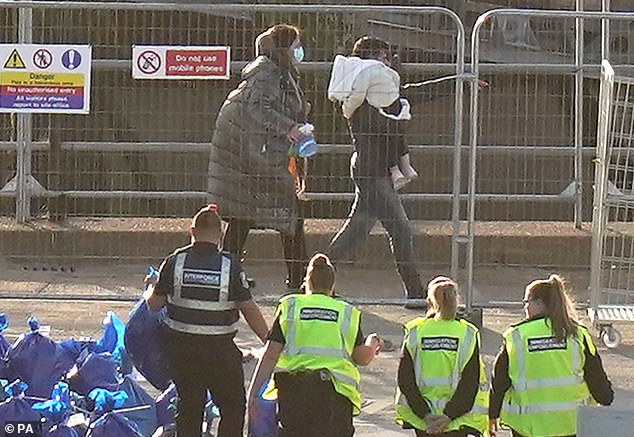 Analysis of the number of people illegally arriving to the UK this month shows there have been 2,232 crossings recorded so far. Pictured: migrants being processed in Dover on Sunday

The French coastguard rescued a further 160 people from the Channel the same day.

The French Navy patrol vessel, Flamant, was tasked with attending to 89 stranded migrants off the coast of Dunkirk and in the Oye-Plage sector. They were recovered from the water and taken back to the port of Calais.

While the national sea rescue boat, Jean Bart II, was also tasked with rescuing migrants whose boat had got into difficulty off the coast of Zuydcoote.. A total of 23 people were recovered on board and deposited at the port of Dunkirk.

The French Navy support and assistance vessel, Argonaute, also intercepted 48 people in one boat near Petit-Fort-Philippe and dropped them at the port of Boulogne.

Once docked, the stranded migrants were taken care of by the departmental fire and rescue service and the border police.

The MoD said its data was taken from ‘live operational systems’ and was subject to change, ‘including reduction’.