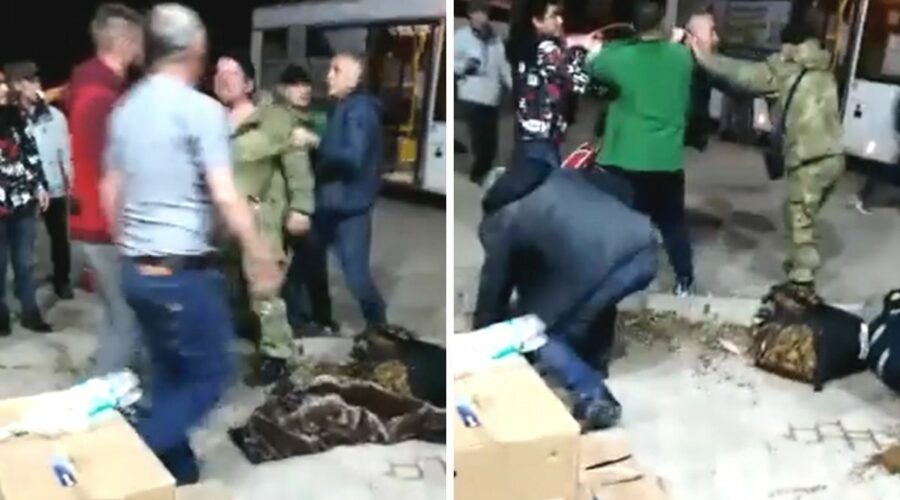 President Putin announced an additional 300,000 men would be mobilised from Russia’s reserve forces in order to continue the Kremlin’s “special military operation” in Ukraine. The decree has sparked fury among the Russian population as the country has been plagued by a series of fierce protests opposing the order to mobilise. The frustration of conscripted soldiers heading to the frontline has also been exposed after a video captured the moment tensions erupted into a drunken brawl among Russian troops.

Media organisation Visegrad 24 has published an unearthed recording that reportedly shows freshly mobilised Russian forces fighting among one another.

In the clip, several different altercations appear to break out among a group of Russian men who are clearly arguing.

One man, dressed in a khaki coloured kit is thrown to the ground, taking out another person standing close behind him as he crashes to the floor.

Some men attempt to intervene in the fight, grabbing the arms of others as punches begin to fly, although the situation quickly grows out of hand.

A caption above the video read: “Drunken Russian soldiers who have just been mobilised by Putin get into fights with each other. It’s a sham army.” 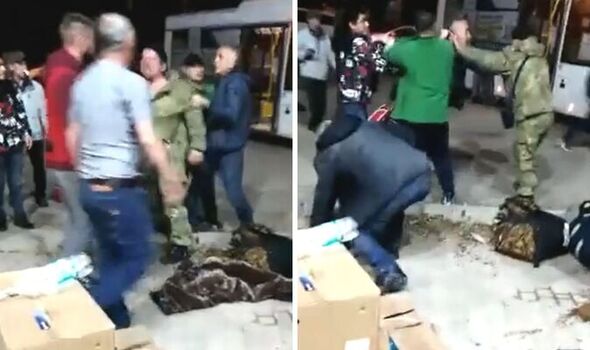 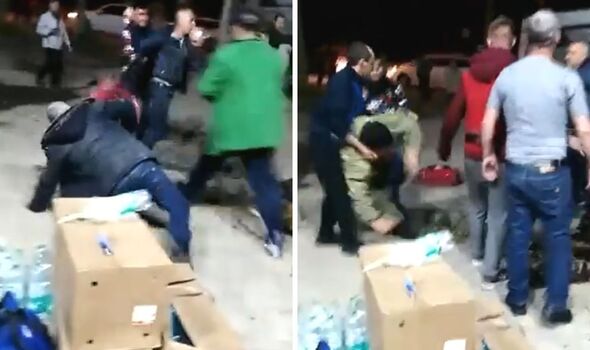 The news comes after another clip emerged allegedly showing a group of Russian conscripts sharing a bottle of alcohol into cups for a toast before they departed towards Ukraine.

While some have regretfully cooperated with the mobilisation order, the declaration has also sparked a mass exodus of civilians as thousands of Russians have attempted to flee the call to the frontline.

Shortly after President Putin’s announcement, demand for flights out of the country spiked and travel routes to open land borders quickly became congested with queues of traffic extending for miles. 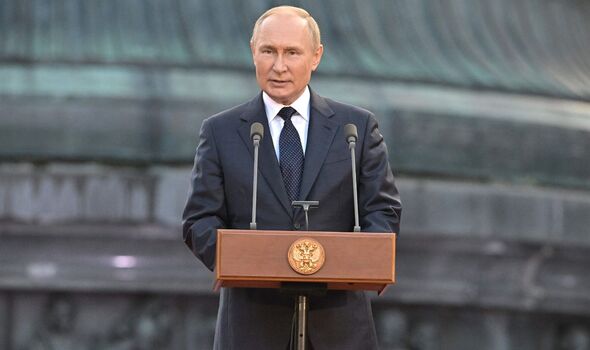 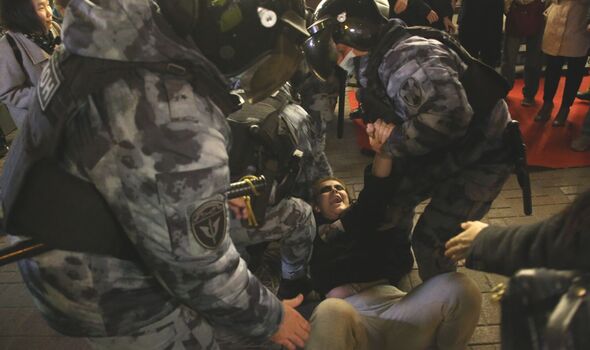 The Kremlin decree comes after months of pledges from President Putin that there would be no large-scale mobilisation of additional troops.

The UK Ministry of Defence reported the order is likely to be “highly unpopular” among the Russian population and the decision represents a “considerable political risk” for Vladimir Putin.

An intelligence report declared: “The move is effectively an admission that Russia has exhausted its supply of willing volunteers to fight in Ukraine.”

Conflict analysts have long reported a crisis in supply of both personnel and military equipment within Moscow’s armed forces. It is understood that the Kremlin did not anticipate a lengthy conflict and, as a result, many of Russia’s operating units are fighting within dwindling numbers and outdated weapons. 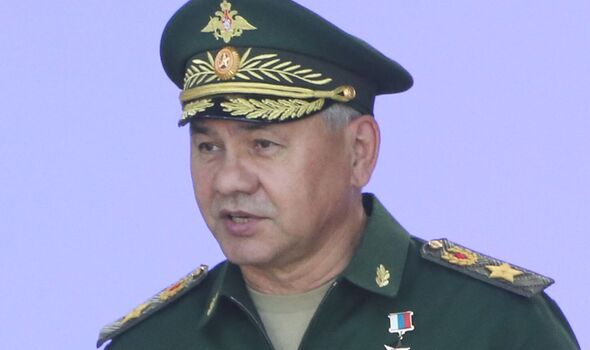 Russian Defence Minister Sergei Shoigu has confirmed the 300,000 additional conscripts will come from a pool of reserve troops with previous military training.

However, the BBC has reported instances of men being handed orders to report for service despite having no military experience. Avoiding the draft order remains a criminal offence under Russian law.

OVD-Info, an independent Russian human rights organisation, confirmed over 1,000 arrests had been made by police in connection with a series of anti-war protests fueled by the mobilisation decree.

The Institute for the Study of War suggested the Kremlin’s mobilisation plan, while boosting the physical number of troops, would most likely fail to generate “effective soldiers”.