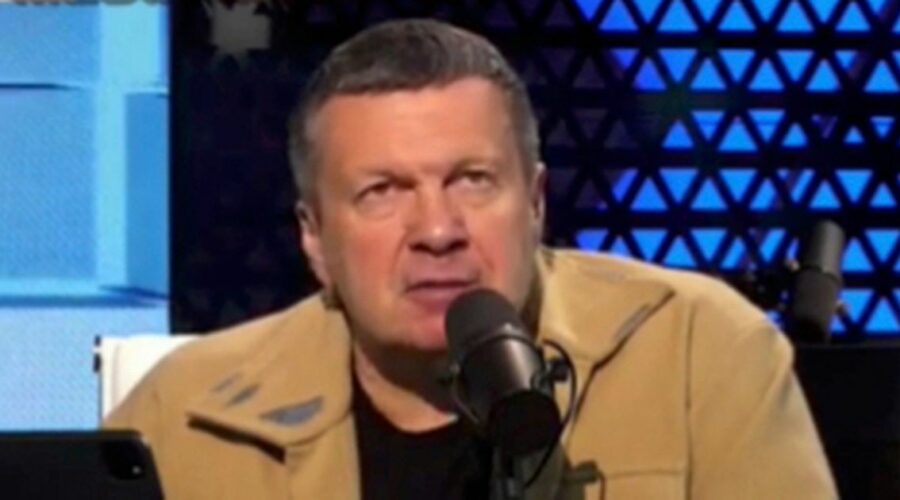 A top propagandist has wavered in his undying support to Vladimir Putin’s regime amid Russia ’s failing war in Ukraine, and appeared to question whether the despot’s supposed nuclear arsenal even exists.

Since Russia’s latest illegal invasion of Ukraine began on February 24, the threat of Putin resorting to nuclear weapons has lingered over the conflict.

The dictator has boasted about his country’s nuclear capabilities, posing for bizarre propaganda amid alleged nuclear missile tests, while his troops are slaughtered by superior Ukrainian forces on the battlefield.

And, during an exhausted rant on Russian State TV, top Kremlin mouthpiece Vladimir Solovyov turned on Russian officials for lying about their capabilities, before even questioning the status of his great leader.

“We started to roll out too late,” he claimed, in a clip translated and shared on Twitter by journalist Julia Davis. “Too many b******s have been lying!”

“From bottom to top, they’ve been lying; about what is in their storage depots, about the technical condition of our equipment, about the number of soldiers on the frontline.”

And, despite numerous deaths of leading Russian businessmen – who mysteriously appear to keep falling out of windows – Solovyov became increasingly furiated by the fact that no one had been punished for the country’s ailing war efforts.

“No one has been executed by shooting,” he moaned. “Not one scoundrel has been grabbed by the ear, not one of them committed suicide.

“And now the whole country has to rise up for war, gritting teeth, experiencing moments of bitter epiphany…”

As winter approaches and Russia shows no signs of taking Ukraine, Putin recently announced a rehearsal of nuclear strikes, which showed “Britain sinking into the Atlantic”, according to military experts.

But, during his rant, Solovyov appeared to challenge the despot, by questioning whether these weapons even exist.

“At least we’re holding exercises,” he observed, sarcastically. “With our strategic nuclear weapons. I hope we actually have them.

“I hope at least in this, we’re still capable. Ugh… Those at fault will still have to be punished… we’ll have to punish for lying in the harshest way.”

To get more news stories from Daily Star delivered straight to your inbox sign up to one of our free newsletters here.