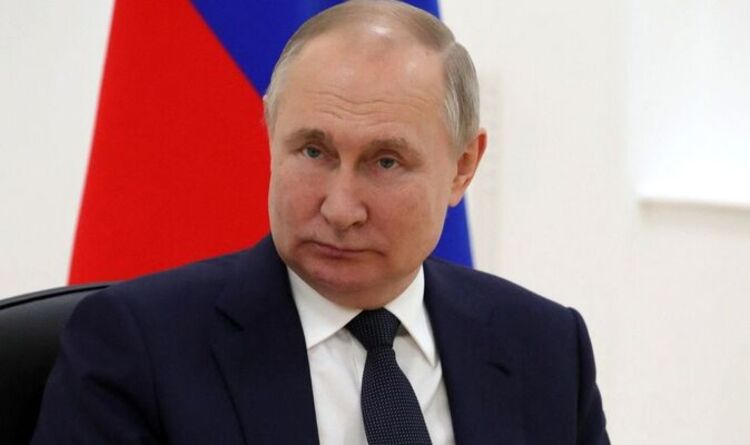 The Russian leader has been self-isolating since the start of the pandemic which psychotherapist Noel McDermott warns could have caused “irreversible psychological” damage and been a factor in his decision to brutally invade Ukraine.

Reports state the Kremlin leader has practically become a recluse since the start of the pandemic in early 2020.

Putin has seemingly been exhibiting paranoid behaviour in recent times including avoiding meetings in person – or across ludicrously long tables, using a body double and ensuring his security team test his food before he eats.

The Russian president has reportedly limited contact with most people, while those in his very close circle are understood to have to isolate themselves before being granted an audience with him.

Mr McDermott told Express.co.uk: “At the beginning of the lockdown, Putin isolated himself and stayed isolated from people even until this point. Even now, he is still physically isolating.”

Mr McDermott explained that being in isolation for a long period of time can have devastating impacts on a person’s mental health and cause them to make drastic decisions.

Speaking about the Russian leader, Mr McDermott said: “His behaviour is totally antisocial and indicates somebody who either has a personality disorder, which is a possibility, or it shows he is extremely afraid and paranoid.”

He added: “One of the ways you punish somebody in prison is by putting them in isolation and people don’t understand how damaging isolation is.

“It will cause irreversible psychological damage.”

He said that when people are placed in isolation, which is a form of torture, it can cause a person’s mind to become “broken”.

Mr McDermott added: “It is so horrific what it does to people.

“If he has self-isolated himself, in the way he seems to have done, he’s [Putin] going to be in a very, very strange psychological or distressed psychotic state.

“There are more and more reports of him exhibiting these behaviours.”

The psychotherapist, who has extensively researched the impacts of existential threats on human mental health, said that “psychosis is pretty common with lack of social contact”.

He said: “The voices inside Putin’s head would likely have become so much more real.”

Both Putin’s mental and physical health have come under scrutiny in recent months after experts try and make sense of his shock invasion of Ukraine.

Tatiana Stanovaya, of the political analysis firm R.Politik, previously said: “He (Putin) has withdrawn into himself a lot during the past two years. He has become distanced from the bureaucratic machinery, from the establishment, from the elite.

“He spends a lot of time alone stewing in his own fears and thoughts.”

18/04/2022 World News Comments Off on Putin health fears: Russian leader ‘in state of psychosis’ and haunted by ‘voices in head’
Markets