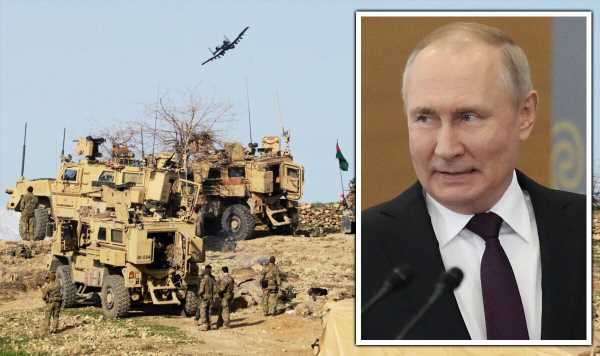 Russia would benefit on multiple fronts from recruiting military personnel trained by the UK and US into its forces in Ukraine, a military expert has told Express.co.uk, as reports allege Moscow is inducting Afghan commandos into its ranks. Several sources within the Afghan military and intelligence services told Foreign Policy that Russian military officials had contacted members of the Afghan National Army (ANA) Commando Corps about joining the Russian invasion in Ukraine.

Considered one of Afghanistan’s most elite military forces, they were trained in specialist weaponry by US and UK forces to combat the Taliban insurgency.

The commandos, numbering up to 30,000, received training from the likes of the British Special Air Service and the famed US Navy SEALs.

When the Taliban toppled the Western-backed government in Kabul, hasty exits saw the ANA commandos largely left to fend for themselves.

Many have remained in hiding from Taliban reprisals and persecution, according to Foreign Policy.

Sources have suggested to the outlet that the ANA commandos could make a real difference for the struggling and demoralised Russian forces facing a counter-offensive from Kyiv’s troops.

One anonymous former senior Afghan security official called the potential involvement of the ANA Commando Corps as a “game-changer” for Vladimir Putin.

As well as announcing a partial mobilisation, Putin is reported to have resorted to bringing convicts into the ranks of the notorious Wagner Group of mercenaries.

Their presence in Ukraine has long been established by Western intelligence and defence agencies, although Russia has officially denied links to the group.

An ex-commando said: “I am telling you [the recruiters] are Wagner Group. They are gathering people from all over. The only entity that recruits foreign troops [for Russia] are Wagner Group, not their army.

“It’s not an assumption; it’s a known fact.”

Another unnamed source said: “They have no country, no jobs, no future. They have nothing to lose.”

Dr Marina Miron, of the Centre for Military Ethics at King’s College London, told Express.co.uk that it was a “logical” move for Putin to recruit foreign fighters for his war effort.

She argued that Moscow has reason to court strategic ties with Kabul, as well as being pressed to act because they “cannot afford to lose people”.

Dr Miron remarked that the approach mirrored Russia’s actions during the Syrian civil war, “during which Russian commanders on the ground were in charge of Syrian and Arab units”.

But, crucially, she outlined: “The Afghan commandos are familiar with the way the US and the UK operate, hence they are better prepared to face the Ukrainians who have also been trained by both countries”.

She told Express.co.uk: “Russia was quick to recognise the ’new’ Afghan government after the Western withdrawal.

“Russia’s geopolitical orientation has been directed towards Southwest and Southeast Asia.

“Given Afghanistan’s geostrategic importance, it is only logical for Russia to want closer ties.”

With Russia’s population “watching closely”, she said: “The Kremlin has to tread carefully”, particularly with the domestic reaction to the partial mobilisation announced by Moscow last month.

Dr Miron continued: “Hence, it is a great opportunity for the Kremlin to solve the manpower problem.”

These foreign units will be “well prepared in military terms”, she said, and are “not as psychologically taxed to fight against and kill the adversary who is ethnically very close to Russians”.

“Last, but not least”, Dr Miron said, “getting fresh troops from abroad might help boost morale”.

She continued: “Casualties amongst foreign troops do not count for Russia which is a much more secure choice than mobilising its own troops.”