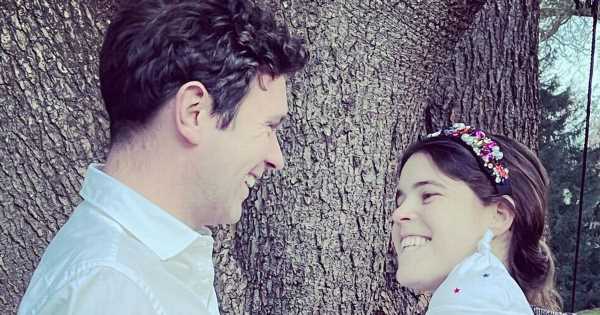 Prince Eugenie appeared to mimic Prince Harry and Meghan Markle as she shared images of her new baby for the world to see.

The royal and husband Jack Brooksbank welcomed their son August to the world in February and have posted a number of adorable snaps of the new arrival.

Many of the photos have been taken in a garden setting, appearing to mirror those of Eugenie's cousin Harry and Meghan cradling baby Archie in the garden of the Californian home.

The photos of Archie were taken by Vogue snapper Misan Harriman, who said the couple were "so comfortable chatting and being in the moment that they were not fully aware that he was shooting a piece of history".

Just days later Eugenie and Jack shared their own snap of August being cradled by his parents in their garden.

The royal revealed the picture was taken by their "wonderful midwife", adding: "Thank you to the wonderful essential workers including our midwife who came to discharge our boy."

Both sets of parents have also released shots of tiny hands and feet being caressed by their mothers' fingers.

Meghan and Harry recently announced they are expecting a baby sister for Archie. They are planning a home birth after a rush to reach the hospital in time for Archie's safe delivery.

A source said: "Meghan's plan was to have a home birth with Archie, but you know what they say about the best-laid plans.

"In the end, her doctors advised her to go to hospital and all she was interested in was about delivering Archie safely.

Harry and Meghan's second child will be the first royal baby to be born in the US. The live in a sprawling £11 million mansion in Montecito, Santa Barbara.

If Meghan is forced to go to hospital she is likely to attend Cottage Hospital in Santa Barbara.

The couple announced to the world they were having a girl during their bombshell interview with Oprah Winfrey earlier in March.

They have not revealed a due date but it is thought to be sometime this summer.