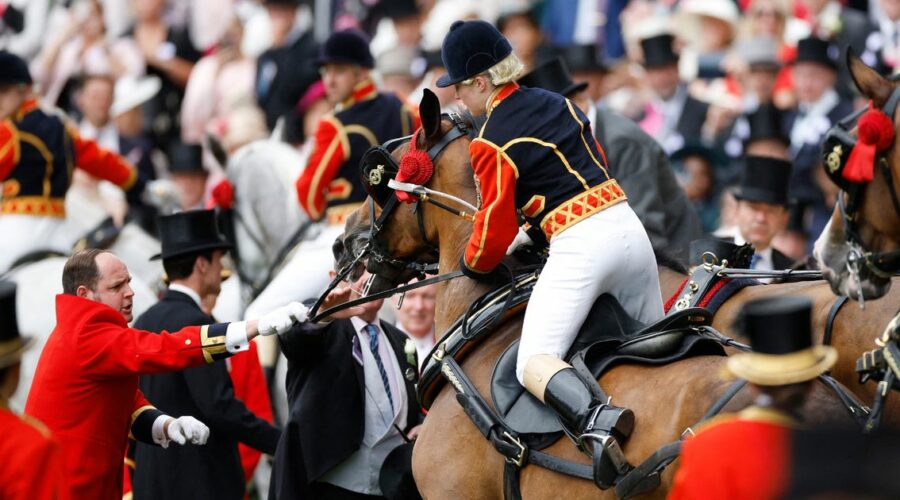 Beatrice was sat next to her husband Edoardo Mapelli Mozzi when the horse bucked wildly, threatening to derail the show.

Dramatic pictures show the moment the rider is tossed around, as aides try to calm the horse.

Guests at the races raised their top hats as the royal procession arrived, accompanied by the national anthem.

Beatrice and Edoardo waved to the crowds as they made their way up the race track after the drama.

They followed in the path of the procession's first carriage, which was occupied by Prince Edward, The Duke of Kent.

It comes after Kate Middleton and Prince William were praised for their kind gesture to the Queen as they led members of the Firm at Royal Ascot yesterday.

The Duke and Duchess were the highest ranking royals at Ascot Racecourse as they took part in yesterday's royal procession, Express.co.uk reported.

It marked the first appearance of Kate and William at the much-anticipated races this year.

Kate and William shared the carriage with The Hon Arthur George Vestey, whose elder brother is a close friend of the Duke and a fellow Old Etonian, and his wife Martha.

Arthur is also the son of the Queen's friend and former Master of the Horse, Baron Samuel Vestey.

The decision to ride in the carriage with the Vesteys was described as a "lovely gesture" by royal commentator Richard Eden.

He wrote on Twitter : "Lovely gesture by the Duke and Duchess of Cambridge to invite Arthur and his wife, Martha, to travel in their carriage.

"Arthur lost both his parents during the pandemic.

"His father, Lord Vestey, would often ride in the Queen's carriage."