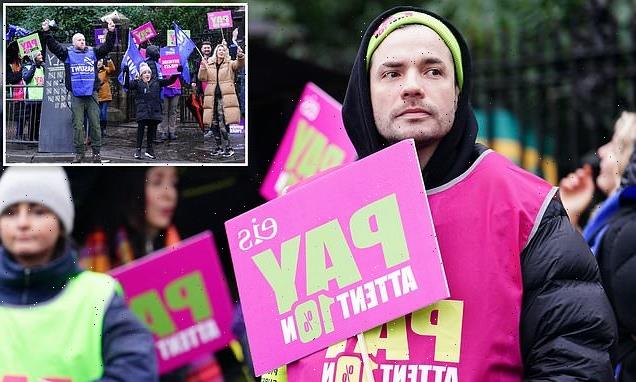 Primary schools across Scotland are shut today as teachers walk out in a dispute over pay.

Parents blasted the closures as a ‘cruel blow’ for pupils with one parents’ group saying that families are being hit financially by the industrial action. 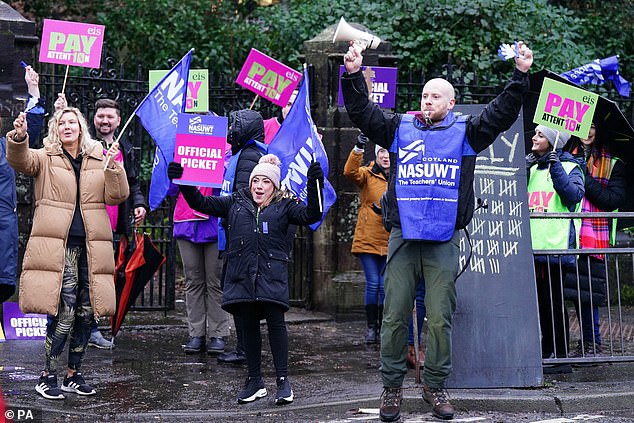 Primary school teachers on a picket line outside a school in Glasgow, Scotland, today 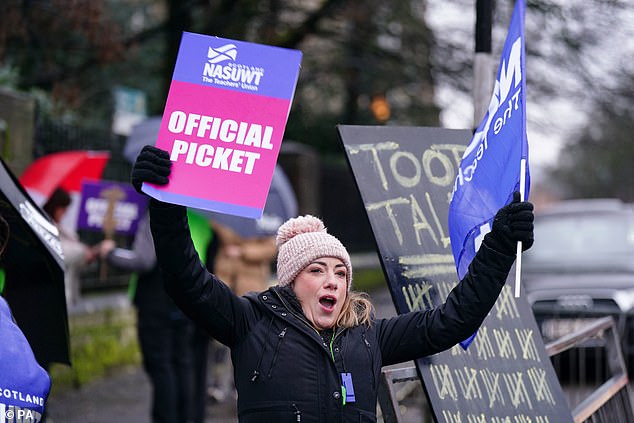 Negotiations held yesterday between the Scottish Negotiating Committee for Teachers (SNCT), which brings together unions, local authorities and the Scottish Government failed to avert the strikes.

Unions involved include Members of the Educational Institute of Scotland (EIS), NASUWT, Scottish Secondary Teachers’ Association (SSTA) and Association of Headteachers and Deputes in Scotland (AHDS).

It comes after SSTA and NASUWT members took two days of strike action in December, while EIS members walked out on November 24.

She had previously urged union members to ‘reconsider their plans for industrial action while talks are ongoing’. 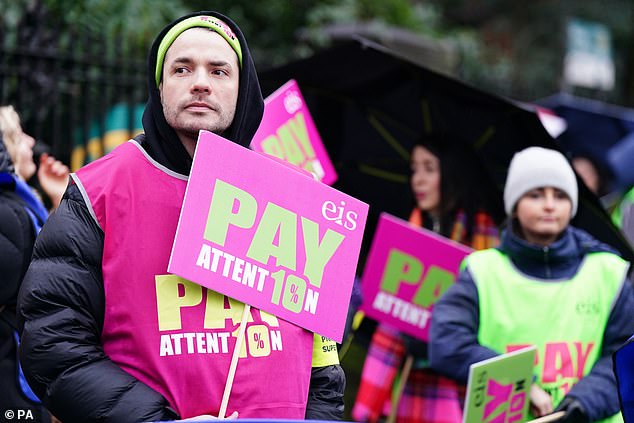 However unions said if there was no new offer then strike action would go ahead.

The current offer would see most staff in classrooms receive a five per cent pay rise, although the lowest-earning teachers would get a 6.85 per cent increase. 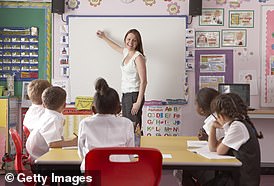 Unions have demanded a 10 per cent increase.

Leanne McGuire, chair of Glasgow City Parents Group told the Glasgow Times that she is seeing increased frustration from parents.

She said: ‘One day before Christmas could easily be overlooked as ‘one day’ but we’ve heard from many parents concerned about what arrangements they will need to make for two days, maybe three if you have children across primary and secondary sectors.

‘We also need to remember ASL pupils generally like routine and when that routine is disrupted it’s not as easy for the parent to explain why and it’s easily accepted by the pupil.

‘These strike days can be quite distressing for ASL pupils and their families.

‘There is a lot of anxiety from parents about senior pupils who are sitting their prelims and the disruption it will cause, increasing the stress the pupils might currently be feeling.’

The group said it was being contacted by parents who run their own businesses and were forced to close for the day to organise childcare.

She added: ‘There is an adverse knock-on effect for families who are being impacted financially too by the strikes.’ 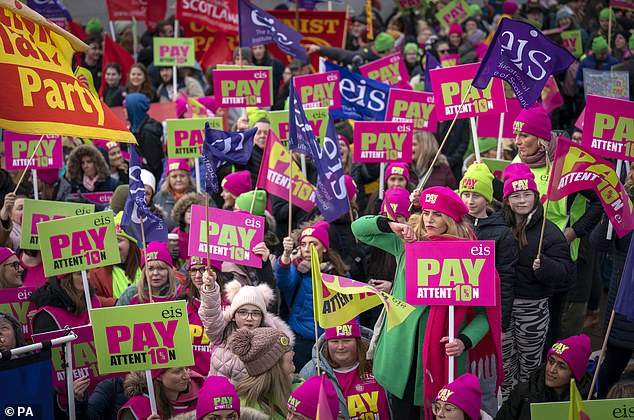 Mike Corbett, NASUWT Scotland national official, said there is still ‘quite a distance’ between what is currently on the table and what teachers are looking for.

He told BBC Radio Scotland: ‘We can’t forget the fact that that last offer that was made in November, which was dressed up as an improved offer, was only really an improved offer for those at the bottom of the salary scale.

‘It remained for the vast majority of teachers the five per cent offer that had been around for some months and had been firmly rejected by all.

Rishi Sunak holds Cabinet talks on how to end ‘forever strikes’ as laws to force striking NHS, rail and fire unions to guarantee ‘minimum service levels’ are set to be unveiled TODAY

Rishi Sunak will gather his Cabinet today as the government pushes ahead with laws to force striking unions to guarantee ‘minimum service levels’.

The PM and his senior team will take stock of the situation ahead of the publication of measures designed to limit the impact of a wave of public sector walkouts.

In a round of interviews this morning, Business Secretary Grant Shapps insisted ministers must act to end ‘forever strikes’.

The new legislation being introduced to Parliament later will oblige workers to maintain basic levels of services during industrial action.

It would initially cover rail, fire and ambulance – but could be extended to the rest of the NHS, education, nuclear decommissioning and border security if union chiefs do not agree ‘voluntary positions’.

The proposals have sparked threats of legal challenges, while Labour has indicated it repeal the law. There is also set to be fierce resistance in the House of Lords, making it unlikely that the rules will apply to the current wave of strikes.

The introduction of the Bill comes a day after crisis talks between ministers and unions failed to resolve industrial disputes involving nurses, teachers and rail workers. Ambulance strikes are expected to go ahead in England tomorrow.

However, there were some signs of movement with Health Secretary Steve Barclay considering backdating next year’s NHS staff pay increase to break the deadlock.

‘There’s still no formal revised offer on the table and that is the real reason why our members and others feel they’ve got no alternative but to be out on strike again today and tomorrow.’

Asked whether the union would be prepared to settle for somewhere between what they are being offered and 10 per cent he said: ‘I think what would need to happen, first of all, is there needs to be a properly improved offer tabled.

‘If we get what we deem to be a decent offer then it’s up to our members to decide what they think about it, but we’re just not at that stage at the moment.

‘Although there are some grounds for optimism, the fact that there have been talks on Friday and Monday and there’s been a little bit of progress made.’

‘This means that strike action, planned for Tuesday in primary schools and for Wednesday in secondary schools, will proceed as scheduled.’

‘It is disappointing, though not surprising, that no new offer was presented today, despite some positive progress in discussions.

‘The union side remains willing to talk, at any time, with a view to reaching a resolution to this dispute.

‘While it is now too late to halt this week’s strike action in schools, we hope that fresh talks may take place later this week to advance discussions towards an improved offer.

‘Only a significantly improved offer from the Scottish Government and Cosla can bring an end to this dispute.’

A Scottish Government spokesman said the meeting on Monday provided a crucial opportunity to further discuss potential areas for agreement.

‘While there was a shared understanding that today’s talks were focused on examining options for compromise, rather than tabling a new offer, dialogue was constructive,’ he said.

‘The Scottish Government continues to urge teaching unions to reconsider their plans for industrial action while talks are ongoing.

‘Strikes in our schools are in no-one’s interest – including for pupils, parents and carers who have already had to deal with significant disruption over the past three years.

‘We value our teaching workforce and recognise the vital importance of an agreement on pay, but we cannot escape the unprecedented pressures facing Scotland’s budget.

‘While we have been clear that a 10 per cent pay increase is unaffordable within the Scottish Government’s fixed budget, we remain absolutely committed to a fair and sustainable pay deal.’

Seumas Searson, general secretary of the SSTA, said: ‘Members are taking part in the strike this week to send a hard message to the employer and Scottish Government that teachers demand to be respected and receive a professional salary that will act to retain teachers in Scottish schools.’