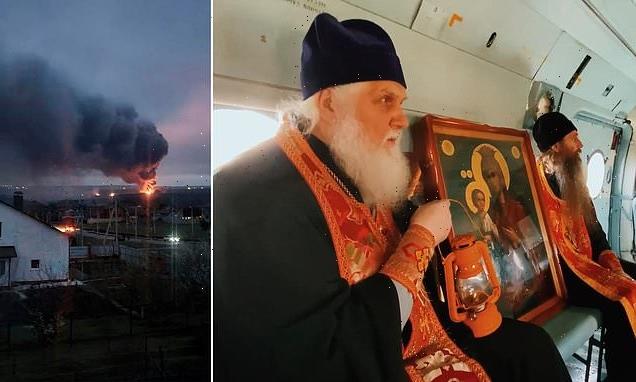 Is Putin hoping for a miracle? Priests fly ‘Holy Fire’ over Russian town that has been rattled by Ukrainian strikes on nearby oil depots and ammo dumps

Orthodox priests have flown the ‘Holy Fire’ over Russian towns that have been rattled by Ukrainian strikes on oil depots and ammo dumps in recent weeks, amid Vladimir Putin’s on-going invasion.

Two clergymen from Stary Oskol, a city in the Belgorod Oblast, were shown in footage on Tuesday flying in a military helicopter while carrying a lantern containing a fire that was reported to have been lit in Jerusalem’s Church of the Holy Sepulchre.

The pair of solemn-looking men, Archpriest Alexy Babanin and Archpriest Andrey Filatov, were sat on a bench in the cargo hold of the aircraft, separated by a paining of Mary and the baby Jesus. One, with a wispy white beard, clutched the lantern.

Russian media said the holy flame had been brought from Jerusalem on April 24 to mark Orthodox Easter, which is observed in both Russia and Ukraine.

It was being used to bless the Russian region that has come under fire from Ukrainian attacks in response to Vladimir Putin’s brutal invasion of the country. 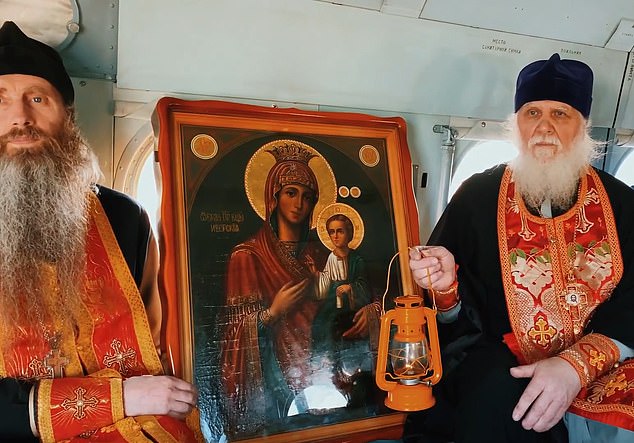 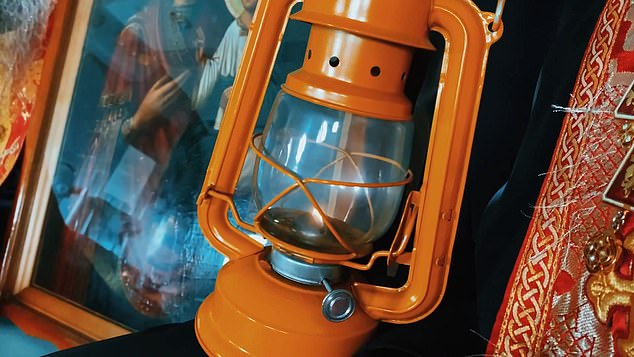 The pair of solemn-looking men, reportedly Archpriest Alexy Babanin and Archpriest Andrey Filatov, were sat on a bench in the cargo hold of the aircraft, separated by the paining. One, with a wispy white beard, clutched the lantern (pictured)

‘The clergy flew over Stary Oskol with the revered Iveron Icon of the Mother of God and brought from the Holy Sepulcher,’ Pravoslavnoye Oskolye – the website for the region’s Orthodox Church – said in a statement.

‘The helicopter was provided by the servicemen,’ the website added. Upon the video being shared, social media users jokingly labelled the aircraft a ‘holycopter.’

Russian media said the clergymen were joined by local officials in the helicopter, including the local deputy head of the department for social development, and the chairman of the local Council of Deputies.

The video captured views out of the window of the helicopter, showing fields and towns stretching out below as the aircraft flew overhead. 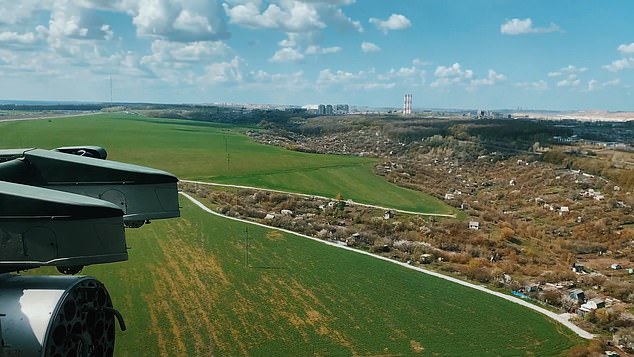 Russian media said the clergymen were joined by local officials in the helicopter, including the local deputy head of the department for social development. Pictured: The view of the local region from the window of the helicopter 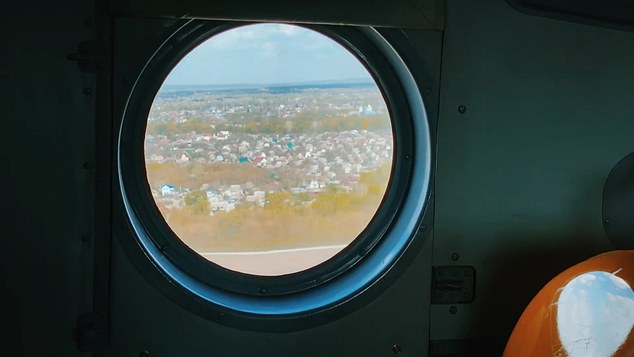 In retaliation to Russia’s invasion, Ukraine has launched a series of cross-border counter-strikes on Belgorod, striking key resources used by Moscow’s military

Orthodox Christians believe that the Holy Fire is a miracle that happens every year on Great Saturday (the day before Orthodox Easter Sunday) in at the Church of the Holy Sepulchre in Jerusalem.

Worshippers believe that a blue light is emitted from Jesus’ tomb, rising from the marble slab that covers the stone bed. The bed is said to be the very same that Jesus’ body was placed upon after he died on the cross, to be buried.

Believers say a column of fire rises from the tomb, and candles are lit with the flame.

These candles are then used to light more that are being carried by the clergy and pilgrims that are inside the church, and distributed to other worshipers.

The Holy Fire is then taken to other Orthodox countries, such as Greece, Bulgaria, Serbia, Ukraine and Russia.

While the Orthodox Church did not give the reason for the flight, it is thought it was to bless the Belgorod Oblast region with the Holy Fire.

In retaliation to Russia’s invasion, Ukraine has launched a series of cross-border counter-strikes on Belgorod, striking key resources used by Moscow’s military. 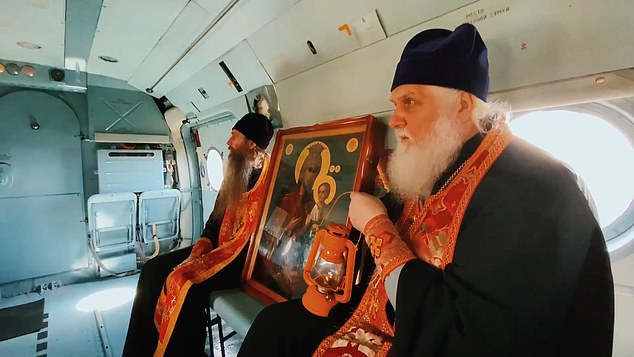 Orthodox Christians believe that the Holy Fire is a miracle that happens every year on Great Saturday (the day before Orthodox Easter Sunday) in at the Church of the Holy Sepulchre in Jerusalem. Pictured: The two priests are shown in the helicopter 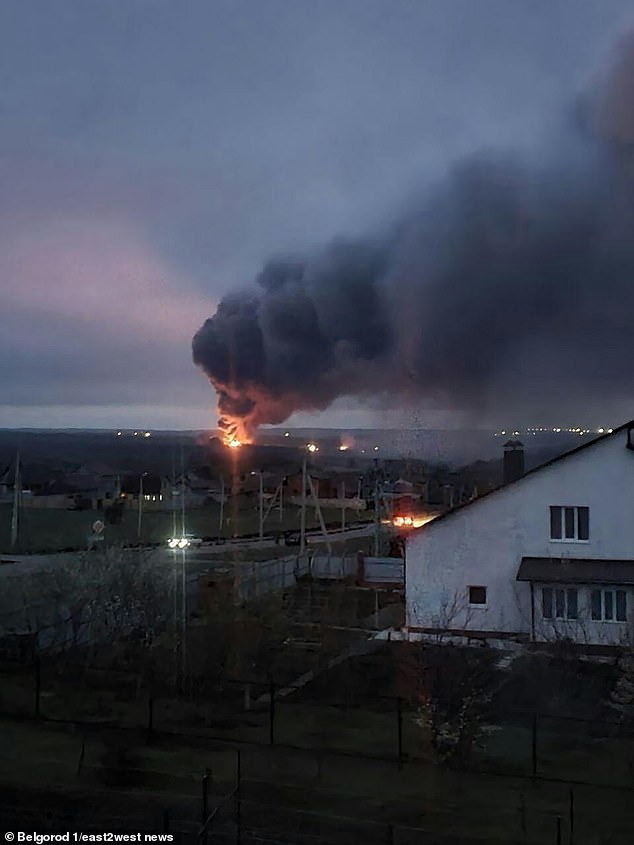 Several explosions were heard in Belgorod early in the morning on April 27. Pictured: An ammunition depot burns near the village of Staraya Nelidovka

On Wednesday, an ammunition depot in the Belgorod region burned after several explosions were heard, the governor said.

Blasts were also reported in Russia’s Kursk region near the border, and authorities in Russia’s Voronezh region said an air defense system shot down a drone.

Ukraine hailed the suspected missile strike on Russian soil ‘payback’ and ‘karma’ for Putin’s vicious attacks on its civilians, that have killed thousands.

‘If you decide to massively attack another country, massively kill everyone there, massively crush peaceful people with tanks, and use warehouses in your regions to enable the killings, then sooner or later the debts will have to be repaid,’ Podolyak said.

He added: ‘Therefore, the disarmament of the Belgorod and Voronezh killers’ warehouses is an absolutely natural process. Karma is a cruel thing.’

Vyacheslav Gladkov, governor of the Belgorod region, said on Telegram: ‘At approximately 3.35am I woke up from a loud bang that sounded like a blast.

‘As I was writing this post, three more blasts were heard. According to preliminary information, an ammunition depot is on fire near the village of Staraya Nelidovka.’

No civilian casualties were reported. 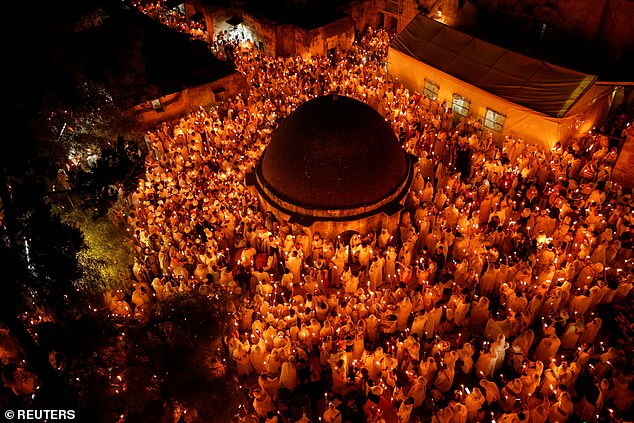 Ethiopian Orthodox worshippers hold candles during the Holy Fire ceremony at the Ethiopian section of the Church of the Holy Sepulchre in Jerusalem’s Old City, April 23, 2022 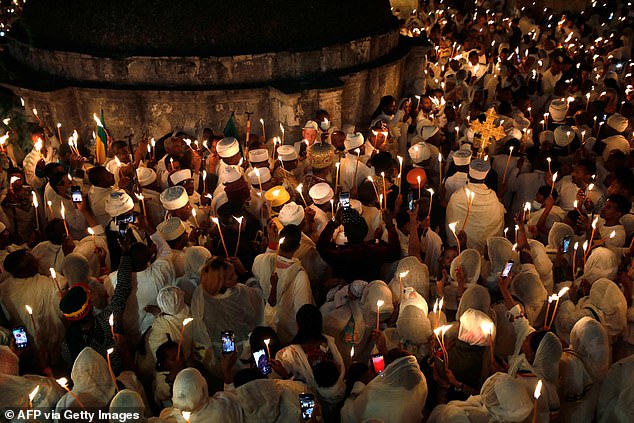 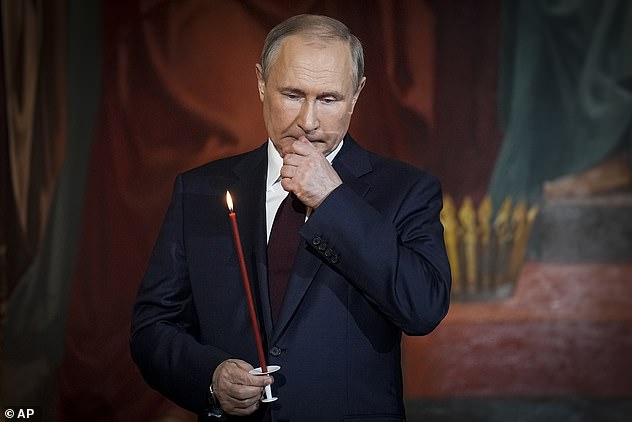 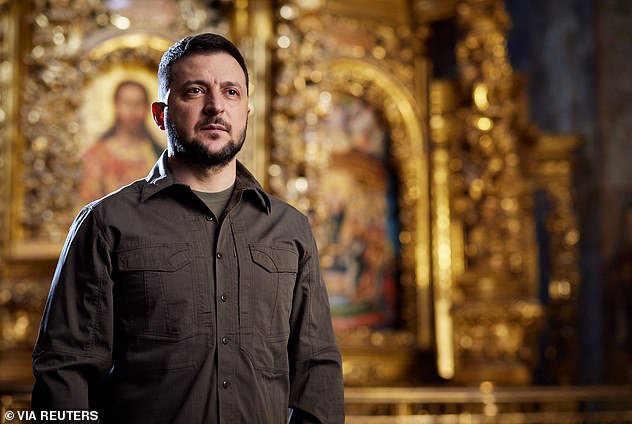 Russia and Ukraine both marked Orthodox Easter on Sunday, with pictures showing Vladimir Putin in a Moscow church as his army’s missiles continued to rain down on Ukrainian civilians across the country.

The Russian strongman attended the midnight mass at the capital’s vast Christ the Saviour Cathedral, that sits close to the Kremlin.

But as his invasion – which was meant to result in a swift, decisive victory over Russia’s smaller neighbour – entered its third month, pictures showed Putin’s mind appeared to be elsewhere as he stood by the church’s altar during the ceremony, dwarfed by a large mural of the Virgin Mary resting Baby Jesus on her lap.

He held a lit candle and when Patriarch Kirill – head of the Russian Orthodox Church – said ‘Christ has risen’, Putin joined other worshippers with the reply ‘Truly he is risen’.

Across the border, just 280 miles from Moscow, the same words were spoken by people in Ukraine as the embattled nation also marked Orthodox Easter, in some cases in the ruins of churches destroyed by Russian shells.

In the capital of Kyiv, prayers were held for those fighting on the front lines and others trapped beyond them in places like Mariupol.

Ukrainian President Volodymyr Zelensky vowed in an Easter message that no ‘wickedness’ will destroy the country and prayed that God returns happiness to children and brings solace to grieving mothers.