Bolivia’s interim President Jeanine Anez called for “patience” and urged citizens to avoid violence as they waited for the results from a high-stakes presidential election on Sunday that many hope can restore stability to the country after a voided ballot last year plunged the Andean nation into political crisis.

Results are expected to be slower than usual as the Electoral Tribunal suspended the customary rapid count, arguing that it was unable to guarantee the accuracy.

“Patience, we must all be patient waiting for the results without generating any type of violence,” said Anez, who is not standing for president.

“I assure you we will have credible results.”

Despite a tense and polarised campaign, the election took place peacefully.

“We’ve had a calm day throughout the whole country up until now,” Deputy Security Minister Wilson Santamaria said in a statement.

Movement for Socialism (MAS) candidate Luis Arce, who has consistently led opinion polls since he was nominated in January, criticised the suspension of the rapid count as he voted in La Paz, saying it “could generate doubts.”

“It’s not ideal but we understand that (the electoral body) has chosen the path to guaranteeing absolute security of the vote and above all the official count,” said centrist former president Carlos Mesa, who has been running second in polls and is expected to face Arce in a run-off next month.

The election was the first in 20 years not to feature former president Evo Morales, the country’s first Indigenous president who resigned and fled the country late last year following weeks of protests over his claimed election win.

At least 36 people died in the unrest. Morales called his removal a coup and a non-elected conservative government has ruled ever since.

Sunday’s vote is an attempt to reset Bolivia’s democracy. 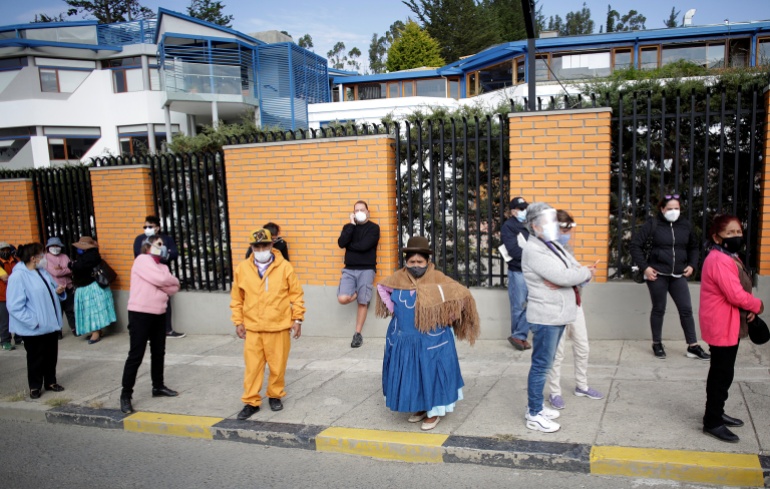 Voters wear protective masks, due to the COVID-19 pandemic, as they line up to cast their ballots [Manuel Claure/Reuters]Voting appeared to be mostly peaceful on Sunday, with long queues at some polling places but little of the hustle and bustle of past election days. Voters appeared to be wearing masks and following physical distancing restrictions.

But it may be days before Bolivians have a good idea of who won. While some independent groups will operate selective quick-count surveys, the country’s Supreme Electoral Court announced late on Saturday it had decided unanimously against reporting running preliminary vote totals as ballots are counted.

It said it wanted to avoid the uncertainty that fed unrest when there was a long halt in reporting preliminary results during last year’s election.

To win in the first round, a candidate needs more than 50 percent of the vote or 40 percent with a lead of at least 10 percentage points over the second-place candidate. A runoff vote, if necessary, would be held on November 28.

The election was postponed twice because of the coronavirus pandemic. On a per-capita basis, few countries have been hit harder than Bolivia: Nearly 8,400 of its 11.6 million people have died of COVID-19.

Leading contender, Arce was a former Economy Minister in Morales administration and led an extended boom, while his main rival, Mesa, is a centrist historian and journalist who was second to Morales in the disputed returns released after last year’s vote. Trailing in all the polls has been Luis Fernando Camacho, a conservative businessman who helped lead last year’s uprising, as well as a Korean-born evangelist. 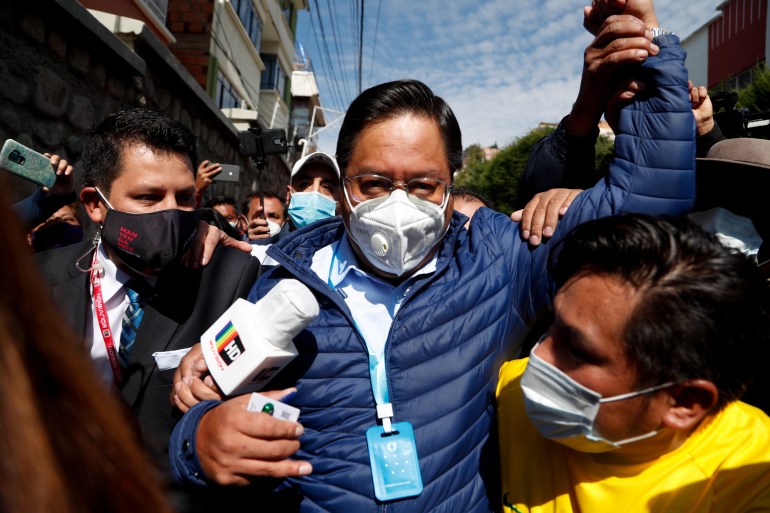 Luis Arce, who is running with the Movement Towards Socialism (MAS) party, was chosen as a stand-in by Morales [Juan Karita/AP Photo]Overshadowing the vote is the absence of Morales, who first secured power in Bolivia in 2006 and was a key figure in the bloc of leftist leaders who held power across much of South America. Morales, now exiled in Argentina, was barred from running for the presidency or even the Senate by electoral authorities following his removal.

He chose Arce as his stand-in for the Movement Toward Socialism party, and a win by the party would be seen as a victory for Latin America’s left.

A boyhood llama herder who became prominent leading a coca grower’s union, Morales had been immensely popular while overseeing an export-led economic surge that reduced poverty during most of his term. But support was eroding due to his reluctance to leave power, increasingly authoritarian impulses and a series of corruption scandals.

He shrugged aside a public vote that had set term limits and competed in the October 2019 presidential vote, which he claimed to have narrowly won outright. But a lengthy pause in reporting results fed suspicions of fraud and nationwide protests broke out.

When police and military leaders suggested he leave, Morales resigned and fled the country. 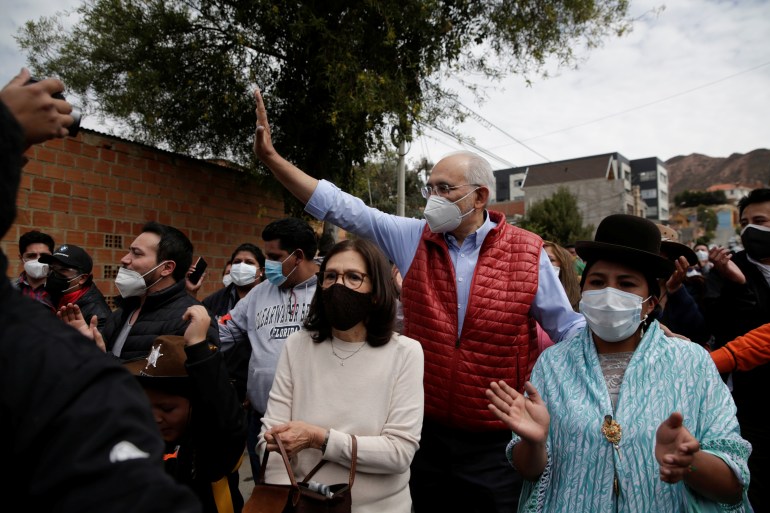 Presidential candidate Carlos Mesa of Citizen Community alliance (CC) came second in the previous disputed election [David Mercado/Reuters]Conservative Senator Jeanine Anez proclaimed herself president and was accepted by the courts. Her administration, despite lacking a majority in congress, set about trying to prosecute Morales and key aides while undoing his policies, helping prompt more unrest and polarisation.

She dropped out as a candidate for Sunday’s presidential election while trailing badly in polls.

Most polls have shown Arce with a lead, though probably too small to avoid a runoff.

How Kimberly Guilfoyle, the 'human Venus flytrap,' has groomed boyfriend Don Jr. into a political powerhouse and turned herself into a conservative star

America is moving to Texas, and it could reshape the political map

How Kimberly Guilfoyle, the 'human Venus flytrap,' has groomed boyfriend Don Jr. into a political powerhouse and turned herself into a conservative star

America is moving to Texas, and it could reshape the political map