The billionaire co-founder of Boohoo was pictured celebrating on a night out with the director of the fast fashion supplier accused of failing to pay its staff minimum wage.

Mahmud Kamani and his wife Aisha attended the party with Asheem Sobti in 2017, one of a number of times the families have socialised together.

Mr Sobti, 51, is the director of a company which Boohoo severed relations with last week amid claims staff were being paid too little and bosses were failing to protect them from coronavirus. 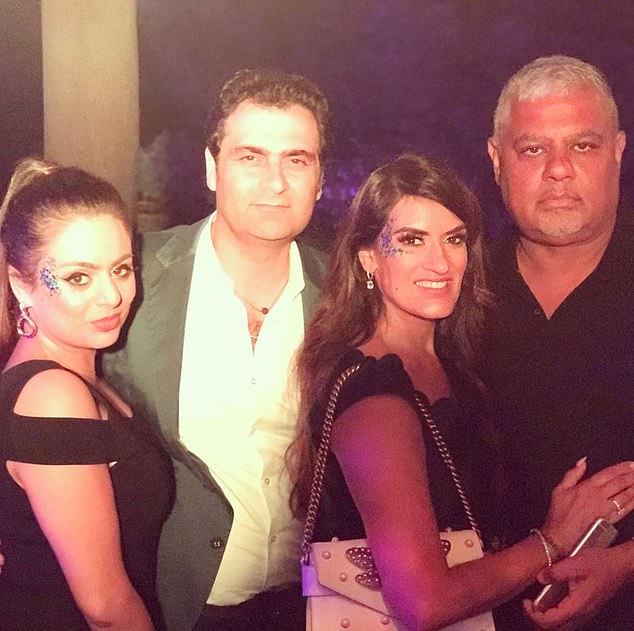 A photograph has emerged of Mahmut Kamani (pictured right), the billionaire co-founder of Boohoo, with Asheem Sobti (second left) the director of the fast fashion supplier accused of failing to pay its staff minimum wage

Boohoo launched an ‘immediate investigation’ saying it was ‘shocked and appalled’ by the revelations workers in Leicester were paid as little as £3.50 an hour.

In a statement it said its supplier Revolution Clothing had instructed another company Morefray Limited to fulfil an order for its brand Nasty Gal.

Boohoo terminated its relationship with both companies saying they had broken its code of conduct.

It did not mention the relationship between the Kamanis and the Sobti family but family social media profiles show numerous pictures of members of the Kamani and Sobti families together.

In 2014, a photo shows Asheem Sobti receiving an award on behalf of Mr Kamani, 55, at the 2014 Asian Achievers Awards.

There are also photos of Mrs Kamani holidaying with members of the Sobti family within the last four years.

The previously undisclosed relationship between the Kamanis, who own a £430 million stake in Boohoo, and the two suppliers will raise further governance concerns as the family seeks to repair the brand’s reputation. 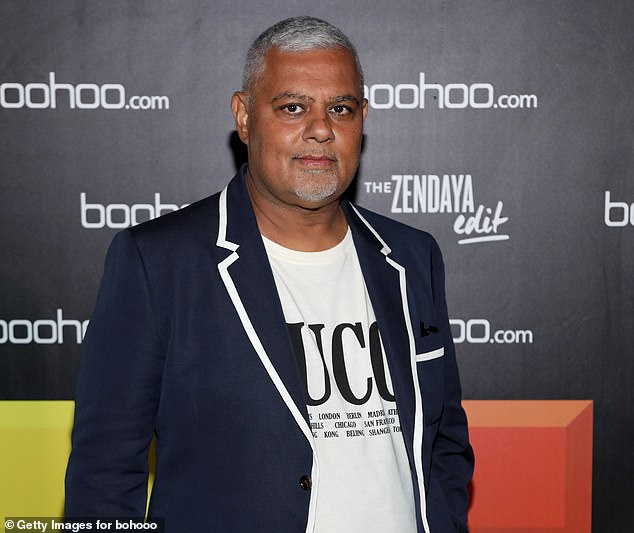 Billionaire Mr Karmani (pictured) owns a £430million stake in Boohoo and lives in a secluded detached home in Cheshire, with a pair of stone lions either side of the front door

It was claimed that staff in Leicester working for the younger Mr Sobti’s firm Morefray were paid as little as £3.50 at a factory and were not asked to observe social distancing rules.

Home Secretary Priti Patel said the alleged conditions in the city were ‘truly appalling’, while critics said the reality of Leicester’s sweatshop garment industry has been an ‘open secret’ for many years.

FTSE100 fashion seller Next, online rival Asos and Zalando have since said they had removed Boohoo’s products from their websites pending investigations.

Boohoo has launched an independent investigation run by a top barrister, Alison Levitt QC, and promised £10million to end ‘malpractice’.

It said: ‘We want to ensure that the actions of a few do not continue to undermine the excellent work of many suppliers in the area.’

The firm added the its ‘investigation to date has not found evidence of suppliers paying workers £3.50 per hour.’

But one of its largest shareholders, Standard Life Aberdeen, said the response to the allegations was ‘inadequate’ and sold £75 million of shares.

The Kamanis live in a secluded detached home in Cheshire, with a pair of stone lions either side of the front door, bought for £1.3 million in 2004. 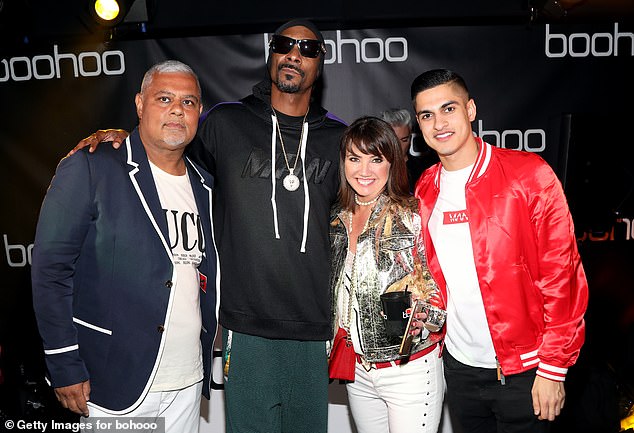 The Boohoo owner (left) has been pictured with other famous faces in the past, including Snoop Dogg (second left alongside Carol Kane and Samir Kamani)

Their children’s social media profiles also show photos of a luxurious lifestyle with models and private planes taken from a plethora of exotic locations.

Likewise Mr Sobti, who lives with his wife in a £1 million gated house in Bramhall, Manchester, and last week had four cars parked in the drive including two Mercedes and a Bentley.

A report by Labour Behind the Label, a garment workers’ rights group, said Boohoo and its sister brands accounted for almost 80 per cent of production in Leicester.

A spokesman for the company said: ‘Boohoo terminated the supplier relationships with both Revolution Clothing Co Limited and Morefray Limited on July 7, 2020, due to non-compliance with the Group’s Code of Conduct ascertained during compliance visits by the Group’s third party audit team.

‘Some Directors and former Directors of the two companies are indeed well-known to members of the Kamani family, but this has had no bearing on ensuring that suppliers meet boohoo’s Code of Conduct.’

Illegal work allowed to flourish ‘due to fear of racism claims’

By Richard Marsden for the Daily Mail

Illegal conditions in Leicester’s fast fashion sweatshops have been allowed to persist because of officials’ ‘racial sensitivities’, an MP has claimed.

Mass-exploitation has been an ‘open secret’ for years with one report revealing up to 90 per cent of workers are not paid the minimum wage.

Over the last five years, there have been four separate reports – including two by parliamentary committees – acknowledging poor working environments, very low wages and exploitation of vulnerable migrants in ‘slave’ conditions. 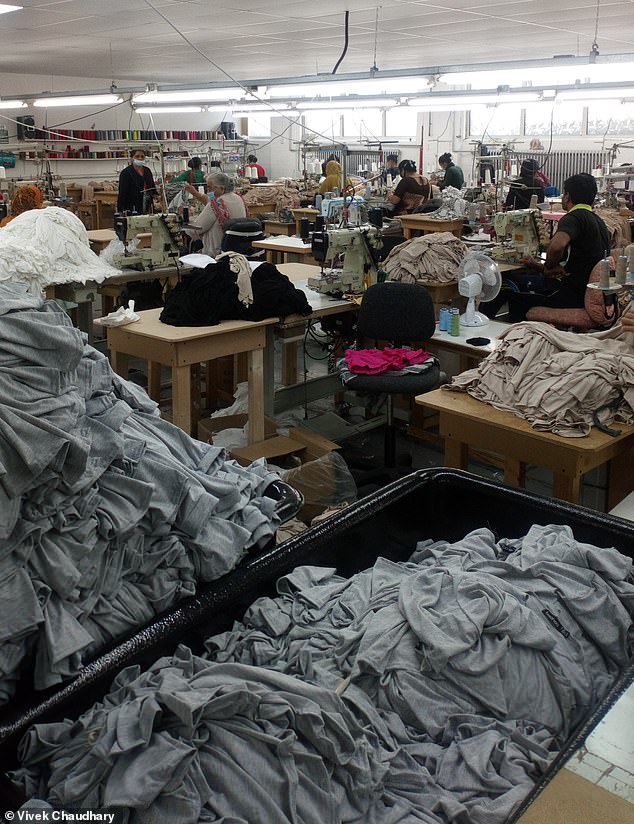 An MP has revealed that illegal conditions in Leicester’s fast fashion sweatshops (pictured) have been allowed to persist because of officials’ ‘racial sensitivities’. It has been discovered that workers in this Boohoo factor in Leicester earn £4 an hour

Yesterday, HMRC – which investigates minimum wage law violations – came under fire after it emerged action was taken against just six clothing factories in the city between 2012 and 2018.

A Home Office source told The Sunday Times: ‘HMRC has been asleep on this issue for ages. They are too busy going after Mrs Miggins. They do not do enough.’

Tory MP Andrew Bridgen likened the failure to clean up the sweatshops to the failure to tackle child sex grooming gangs in towns and cities such as Bradford and Rotherham for fear of racism.

Mr Bridgen, who represents North West Leicestershire, said: ‘There has been a total systemic failure by the organisations supposed to protect the public and those who work at these factories. Some of it is down to racial sensitivities, and the same as the child abuse situation.’

Former North West chief crown prosecutor Nazir Afzal, who led prosecutions of child sex grooming gangs in Rochdale, said: ‘I think the desire for cultural sensitivity has played a part in what we’ve seen in Leicester but there are other issues as well. The broader issues are that the authorities don’t have the resources [to investigate].’

Leicester East Labour MP Claudia Webbe said: ‘It’s such an open secret that no one took any notice when I raised the issue during my maiden speech in March. Nothing ever gets done about it.’

Concerns about Leicester’s sweatshops resurfaced after fears a resurgence of coronavirus in the city may be linked to working conditions in the clothing factories used by internet retailers including Boohoo.

The first report documenting poor working conditions was published in 2015 by Leicester University. 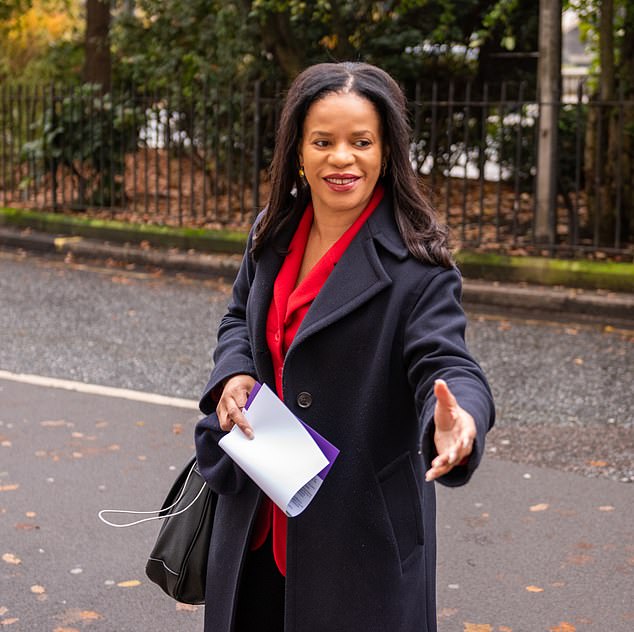 The report, led by academic Dr Nik Hammer, blamed subcontracting to small, unregulated factories and pressure in the industry to keep costs to a minimum.

Immigrants made ‘vulnerable’ due to their poor English and lack of residency status were exploited, with the workforce ‘regularly replenished’ through new arrivals.

A 2017 report by the joint parliamentary committee on human rights found human rights abuses were ‘endemic’ in Leicester’s garments industry.

The same year, a report by Leicester and Leicestershire Local Enterprise Partnership – a committee of business and council leaders – highlighted the same problems.

And in 2019 the parliamentary environmental audit committee found factories were still ‘breaking the law to maximise profits’.

Leicester City Council said it has no powers to check working conditions inside a building, enforce the minimum wage, or monitor the legality of the workforce.