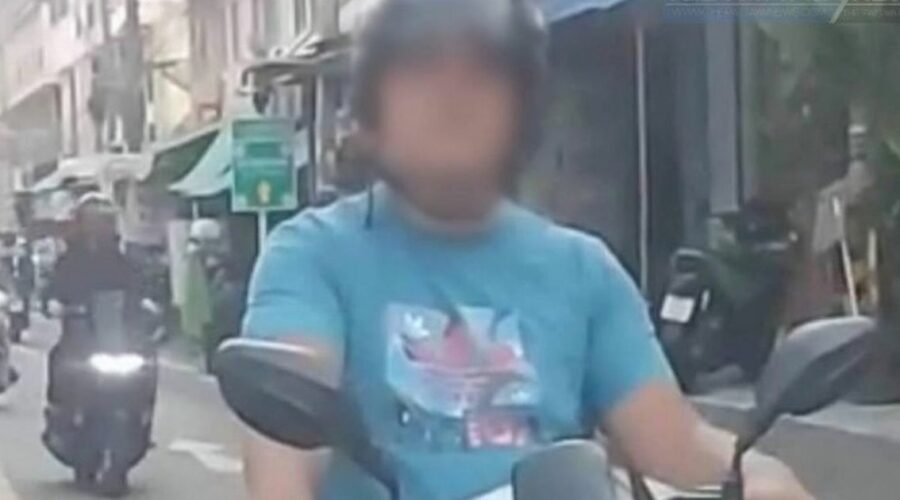 A 49-year-old man accused of flashing his genitals at children was arrested as he tried to flee from police by boarding an aeroplane.

The Italian national was attempting to fly out of Thailand after allegedly carrying out a sexual act in front of the youngsters in the coastal city of Pattaya.

But immigration officers and the police apprehended him on Christmas Day.

The man was caught on video committing the indecent behaviour by 34-year-old, dad-of-five Prateep Thongkam.

He reported that the suspect had flashed and masturbated in front of his four young daughters and son, while they were riding in the back of his pickup truck.

A shocked Prateep showed the video to The Pattaya News media outlet, who confirmed that the man can be seen grabbing and flashing his penis while riding a motorbike behind the truck.

The children were unaware of the suspect's lewd conduct, according to their father, who watched as the man then rode off.

Prateep subsequently filed a complaint at the Banglamung police station on Christmas Eve and demanded that the suspect be arrested.

The suspect was then taken to the same station after Chonburi immigration officials and police officers caught up with him as he was trying to leave on a plane from Suvarnabhumi Airport at 12.30pm on December 25.

Police told how the suspect had been staying in Thailand since late September on a non-immigrant visa.

He had been renting an apartment in the Nongprue subdistrict near Raiwanasin Market.

The 49-year-old man went on to confess that he had acted indecently in public and was made to pay a fine of 3,000 baht (£72) before he was released from custody.

Police officers also confirmed that the suspect would now be monitored and his visa would be revoked if he committed the same act again after returning to the country.

The police told The Pattaya News they would document the suspect and revoke his visa if he re-entered the country and committed the same act again.

Having had his identity withheld by the police, the man also declined to make a statement to the media.