Last week Brooke Robinson saw a koala and its baby in a tree near where her house once stood in Mallacoota. It made her day.

It is three years this weekend since the Black Summer bushfires hit the coastal town in far East Gippsland, incinerating the surrounding Croajingolong National Park and the houses of 123 families.

Across Victoria and NSW, the fires scorched more than 24 million hectares, killing 33 people directly, and almost 450 more through smoke inhalation. 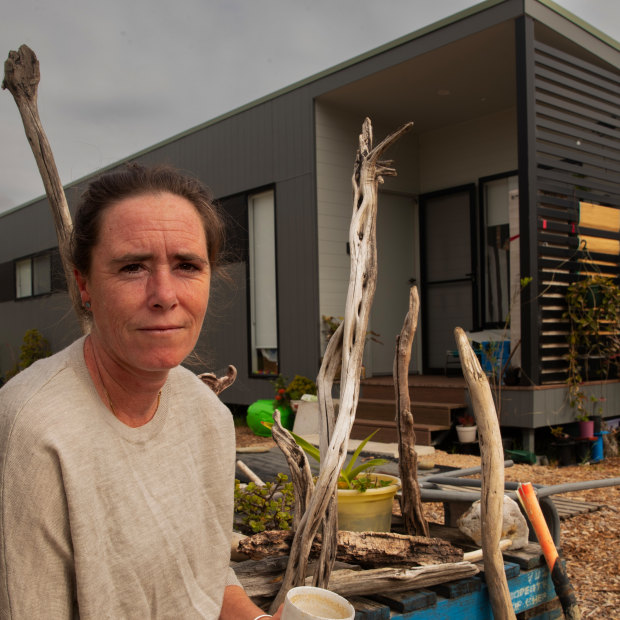 Scientists and Mallacoota locals alike feared the fire and the heat was so extreme that bush and wildlife would not recover. Now, after the plentiful rain that fortuitously followed the fires, the signs of bush revival are positive.

But there are ongoing concerns amid soaring house prices and building costs for many families still struggling to secure permanent homes or to finish rebuilding.

And while the community’s recovery efforts have been celebrated, locals worry about the lack of ongoing help for those most impacted by fires.

“I haven’t got a permanent home yet, but I’m delighted the koalas are back living here,” Robinson says.

A survey by the East Gippsland Shire Council has found that of the 123 families that lost their homes in Mallacoota and nearby Gipsy Point and Genoa, 79 plan to rebuild, but only 27 have finished.

Robinson, a single mum with two sons, is among those trying to rebuild.

She went from working at the Mallacoota pub to living there temporarily after she was made homeless by the fire.

“COVID and the problems of rebuilding have been more traumatic than the actual fire event.”

After four moves she is now living in one of 15 modular homes provided by the state government through a short-term housing program near where her modest weatherboard once stood.

Seaside Mallacoota is one of Victoria’s most remote settlements. Distance and lack of local tradies makes building a lengthy process at the best of times. 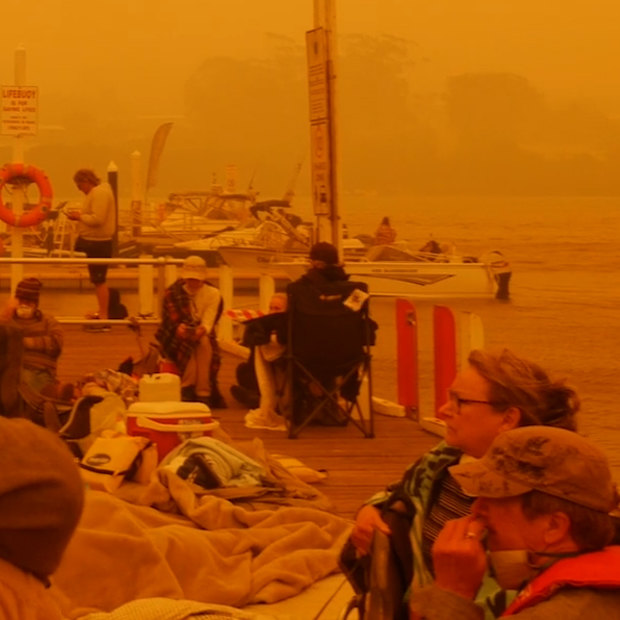 Residents and holidaymakers gathered on the pier to escape the Mallacoota inferno.Credit:Kristin Rule

Those rebuilding after the fire are doing so at the very time the construction industry is struggling with huge demand boosted by the Morrison government’s $688 million home builder scheme introduced in June 2020 and soaring costs due to a dire global shortage of labour and materials.

Some have had to bring in their own builders and pay for their accommodation in a tight housing market made more so by the loss of homes from the fire on top of demand from holidaymakers and COVID sea-changers from the city.

Robinson’s fledgling new home does have a roof and front door, but she is waiting for plastering, plumbing and wiring. Realistically, she says, completion is still a year or more away.

The longer the wait, the higher the bills. Robinson now works in aged care where wages are infamously low, unlike building costs. A quote for windows alone rose $5000 in a month. The price of her preferred flooring doubled.

So, she will do as much of the work she can herself, painting for instance, and opt for cheaper materials. “What I could have afforded at the start I just can’t now. This is a hellish thing to do alone.”

After the frenzy of the fire and post-fire period when the Mallacoota community was in overdrive helping one another and the local animals, and after the constant moving and worry about housing and work, Robinson is exhausted.

“It’s a matter of touch and feel it as you go. I just get one thing done at a time.”

On a bush block near Gipsy Point about 20 kilometres inland, local architect Christy Bryar knows well how Robinson is feeling. 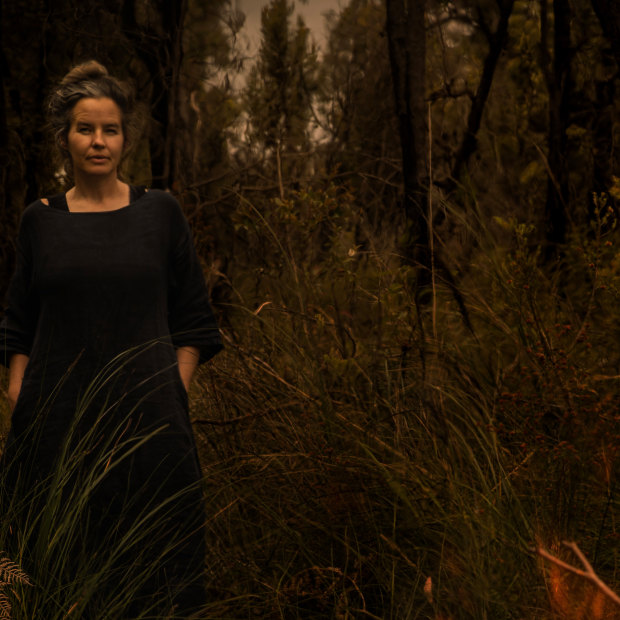 Local architect Christy Bryar, who is also living in a modular home, says people are having to rebuild at the ‘worst time ever’.Credit:Rachel Mounsey

She and her partner Dave are also now living in a modular home on the site of the bush shack they once called home.

Bryar says those rebuilding are doing so at the “worst time ever”.

The combination of waiting many months for council approvals and for a builder saw the quote on Bryar’s plan blow out by $100,000. The dilemma for those rebuilding, says Bryar, is whether to redraw their plans or somehow find the money to cover the extra cost.

Although the couple has been ready to start construction since mid-year, Bryar now expects to wait until next year for work to begin.

She notes the first COVID lockdown in 2020 came just one month after the one road into Mallacoota was re-opened, having been closed for more than a month for safety reasons.

“COVID and the problems of rebuilding have been more traumatic than the actual fire event,” she says. “People are at breaking point.”

“People are at breaking point.”

Community leaders say the ongoing stress faced by those most affected by the fire highlights weaknesses in the recovery response.

Carol Hopkins, chair of the community-elected Mallacoota and District Recovery Association, says many of the mental health and other services sent to help locals are now being withdrawn at the very time they are most needed. 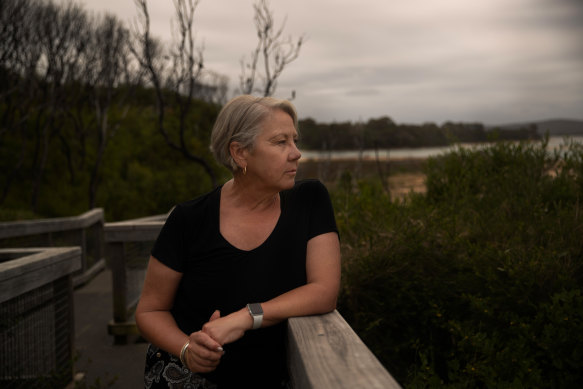 Carol Hopkins says support services are being withdrawn at a time when people need them most.Credit:Rachel Mounsey

“For those people who haven’t rebuilt it is tougher than ever because now they’re just exhausted and downhearted,” she says.

Hopkins says some people are only now coming forward for the first time to seek help. “One of the psychologists from these services is saying they’re busier than they’ve ever been.”

Hopkins says too many professionals working with organisations providing services, including Red Cross, the Royal District Nursing Services and Royal Flying Doctor Service, are on short-term contracts of just six or 12 months.

“All those short-term employment contracts are really not fit for purpose in the period following an emergency,” she says.

This weekend, three years after the fires, Mallacoota is now buzzing with Christmas and new year revelry. The town is packed with holidaymakers.

Locals and campers are also relishing the return of the bush and the animals.

“We’ve had pretty much ideal growing conditions ever since the fire,” says Hopkins. “So we’ve been lucky in that regard.” 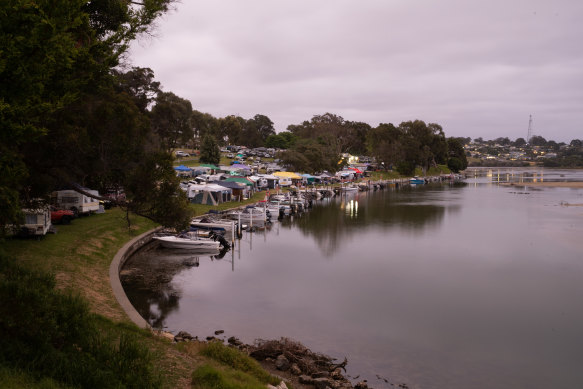 Brooke Robinson’s voice lightens when she talks about the animals. She moved to Mallacoota when she was 18 to be near the ocean and the bush.

“The koalas and kangaroos are coming back. I’ve seen lyrebirds and a lot of wombat poo. They’re rebuilding their lives like we are.”

31/12/2022 World News Comments Off on ‘People are at breaking point’: Still waiting for a home in Mallacoota
Markets