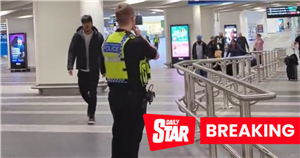 A UK train station has been evacuated following reports of a hand grenade being found at the scene.

Passengers at Birmingham New Street Station were told to get "as far away from the building as possible" this afternoon (Monday, October 31) according to some social media users.

All services running in and out of the station have been delayed due to a "security alert". A 100 metre police cordon is reportedly in place around the station.

One person at the station claimed the conductor on the 3.28pm from Derby told passengers a suspected hand grenade had been found on platform 1, reports the Mirror.

Birmingham New Street has now been evacuated with alarms heard sounding. People say they were warned to get away as both police and ambulances arrived.

British Transport Police Birmingham said on Twitter: "We're currently responding to a report of a suspicious item on a platform at #NewStreet.

"The station has been evacuated as a precaution while the item is assessed. Thank you for your patience while we respond to this incident."

A spokesperson for the British Transport Police said: "Officers received a report of a suspicious item on a platform at Birmingham New Street at 3pm today (31 October).

"The station has been evacuated as a precaution and a cordon is in place while specialist officers attend to assess the item."

CrossCountry trains said: "Due to a security alert at Birmingham New Street all lines are blocked.

"Train services running across the whole CrossCountry network will be delayed.

One police officer at the scene told The Mirror that they expected the rail hub to be shut for at least two to three hours but could be longer and said it was a "serious incident, firearms related".

Videos from the scene show hundreds of people flooding from the station into Birmingham city centre.

One Brit stuck on a train bound for Birmingham New Street before the grenade was found told The Mirror: "Im just currently stuck on a train that was due to come into the station when it suddenly stopped.

"We were told that its a potential 'package' is on one of the platforms. They are giving out free mini water bottles to those who need it. We are not sure when we will get off."