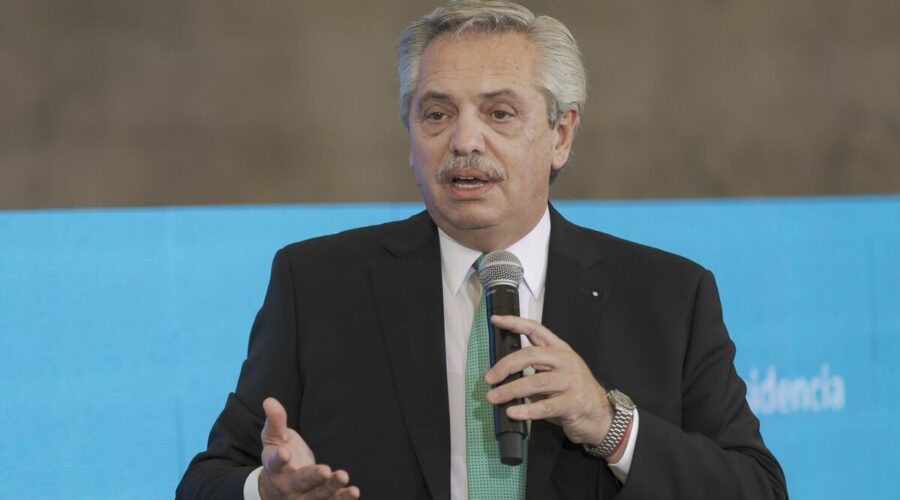 President Alberto Fernández of Argentina has branded the “occupation” of the Malvinas by the United Kingdom as “illegal and illegitimate” and claimed it affects Argentine sovereignty. The Argentinean President made the remarks at a graduation ceremony for second lieutenants, midshipmen, and ensigns of Argentina’s armed forces.

Mr Fernández referred to the Malvinas (commonly referred to as the Falklands in the United Kingdom), South Sandwich, and South Georgia Islands.

The President went on to talk about how the British presence in the region had a detrimental effect on the nation’s integrity, saying it “affects the exercise of our sovereignty, our capacity for self-determination and territorial integration, as well as the full disposition of our natural resources”.

This year marks the 40th anniversary of the Falklands War, as the ten-week undeclared conflict was fought between April and June 1982.

255 British and around 650 Argentine servicemen died in the fighting, which took 74 days to conclude.

Speaking at the event, held at a military college, the President noted this, saying: “During 2022, we commemorate the 40th anniversary of the Malvinas War (1982) and we want to continue paying tribute and honouring those who participated in it and the families of the fallen.”

“Our claim is a mandate of the Constitution that points the way to achieve it.”

The President also spoke of a “vocation for peace” whilst mentioning his belief that Argentina still requires a strong military.

Mr Fernández went on to say, “Our vocation for peace and the need to recover those spaces requires that we have properly enlisted, equipped and trained armed forces to guarantee the defence of the nation.”

The military capabilities of Argentina in the South Atlantic and Antarctic regions were a central theme of the speech.

Minister of Defence Jorge Taiana also attended the event at the Military College of El Palomar.

The President also talked of the specific measures Argentina was taking in the area, referring to surveillance and military capabilities.

Mr Fernández said: “We have installed a surveillance radar in Río Grande and have begun work on a new naval base in Ushuaia, which will be part of the joint military garrison and will include elements of the air force and the army.”

The nation’s south is also opening new airports between Río Gallegos and Tierra del Fuego, as well as the joint maritime command implementation. The President said any new military installations were in addition to this.

The Falkland Islands Government has a year-long programme in recognition of the anniversary of the Falklands conflict.

The government’s official website states: “We will be reflecting on the brave sacrifices of those who restored our freedom, as well as showcasing the modern Falkland Islands, our achievements since 1982, and our ambitions for the future.

“The strapline that sums up the spirit of the anniversary is ‘Looking forward at 40’, which sends out the clear message that we are a forward-looking nation, determined to take control of our own destiny and shape our own success.”