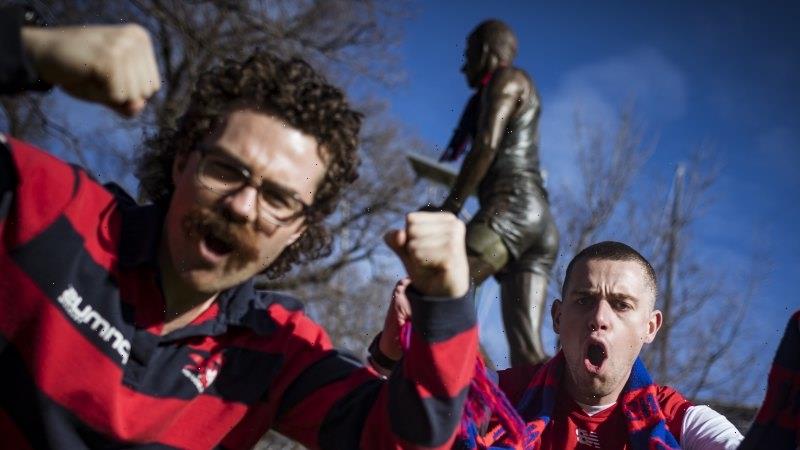 Tom Shiels was rapt that his Demons had won the premiership, but also a little shell-shocked.

“It’s unreal. It’s still sinking in, I think,” said the 25-year-old from Fitzroy North, who made a pilgrimage to the MCG early on Sunday, the day after Melbourne won their first flag in 57 years. 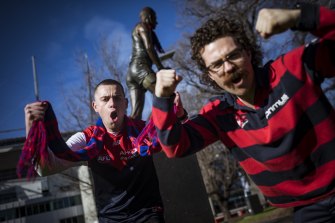 Sam Holloway and Tom Shiels celebrate outside the MCG on Sunday.Credit:Chris Hopkins

“I keep saying ‘we’re Premiers’ to try and tell myself that we are,” he said, sitting near the statue of Demons great Jim Stynes. “It’s just hard to believe.”

Mr Shiels – who came to the ’G with friend Sam Holloway, 26, with whom he has watched matches for many years – said of following the Demons: “There hasn’t been much success, obviously.

“But you want to keep supporting your team, no matter what happens. But I didn’t think this day would really come. Not at all.”

The pair were among a stream of happy die-hards at the MCG on Sunday. 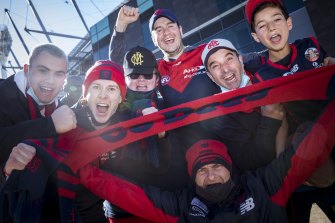 Jordan McCleery (second from left) and fellow members of the Demon Army who headed to the ’G on Sunday to celebrate their team’s win.Credit:Chris Hopkins

Due to COVID-19 restrictions, there was no mass singing of It’s a Grand Old Flag, no food vans and no players holding up the AFL premiership cup.

Instead, fans shouted “Go Dees” as they passed one another, and kicked footies in Yarra Park.

Jordan McCleery, 18, who arrived at 7am, said it was “a bit disappointing” not to have full celebrations the day after a win.

“We have broken a 57-year drought. It’s disappointing we all can’t come together in a large group,” he said. “But hopefully in the next few months we can gather together with the players and really celebrate here in Melbourne.”

John O’Callaghan, 51, was at the MCG on Sunday – his birthday – and said it was great to celebrate the flag with his 11-year-old son Will, a fellow Demons fan.

“It’s sad that we couldn’t be in the MCG for the game but this is a brilliant birthday present,” Mr O’Callaghan said.

He and his family watched the grand final in their Richmond home while sipping champagne and eating from a cheese and charcuterie board.

Son Will said: “I feel really excited about the Demons. This is probably just the first of many premierships I’ll get to see.” 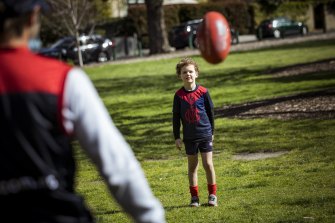 James Dowling and his son Cooper have a kick at the ’G on Sunday.Credit:Chris Hopkins

James Dowling, 43, who was kicking a football in Yarra Park with his son Cooper, seven, said Demons fans like them would be feeling “ecstatic”.

“But it’s probably still a bit hard to believe.”

Supporters also came out in their red and blue on the Tan Track in South Yarra.

Among them was Russel Howcroft, the 3AW breakfast co-host and a former Melbourne board member, who said he was thrilled for the club and the players.

But he felt “a little melancholy” at not being able to watch the game and celebrate with friends and family at a pub or a party.

It would have been good “to have been in a more energised environment” than on the couch at home, he said.

Mike McShane, 63, of Clifton Hill, and his daughters Emma, 23, Georgia, 21, and Zoe, 19, tore themselves away from repeats of the game to walk the Tan.

Mr McShane said he had dearly wanted to watch the grand final live in Perth, and would have happily stayed in quarantine for two weeks before the match. 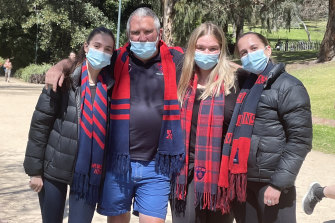 Demons fan Mike McShane and his daughters Georgia, Zoe and Emma took to the Tan in South Yarra.Credit:Carolyn Webb

It was only last Friday that he abandoned hope of a trip to Western Australia and cancelled accommodation he had booked in Perth.

But he said he and his family still had fun watching at home with red and blue streamers and balloons. “It was the next best thing to being there.”

Premier Daniel Andrews congratulated the Melbourne team and supporters on Sunday but said celebrating fans should not breach the COVID rules.

“It was a great win by the Melbourne Football Club last night,” he said. “On the point that they’re long-suffering: we’re all long suffering, so let’s not any of us do anything that makes this pandemic event longer, makes this lockdown longer. There’ll be a time to celebrate. But let’s not, any of us, do anything right now – despite how happy the fans might be – let’s not do that because it’s against the rules.” 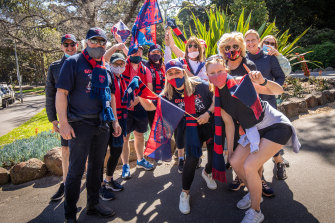 COVID-19 response commander Jeroen Weimar said he was worried about spread from illegal grand final night parties, because “households getting together to watch footy or do anything else is a really high risk. If people did use [the grand final] to get together when they shouldn’t have, there’ll be people walking out of that with COVID transmission as a result, and our health system will have to pick up the pieces in the weeks ahead.”

Keep up to date with the best AFL coverage in the country. Sign up for the Real Footy newsletter.

26/09/2021 World News Comments Off on No cup, no players, but jubilant Demons fans venture out to show joy
Markets